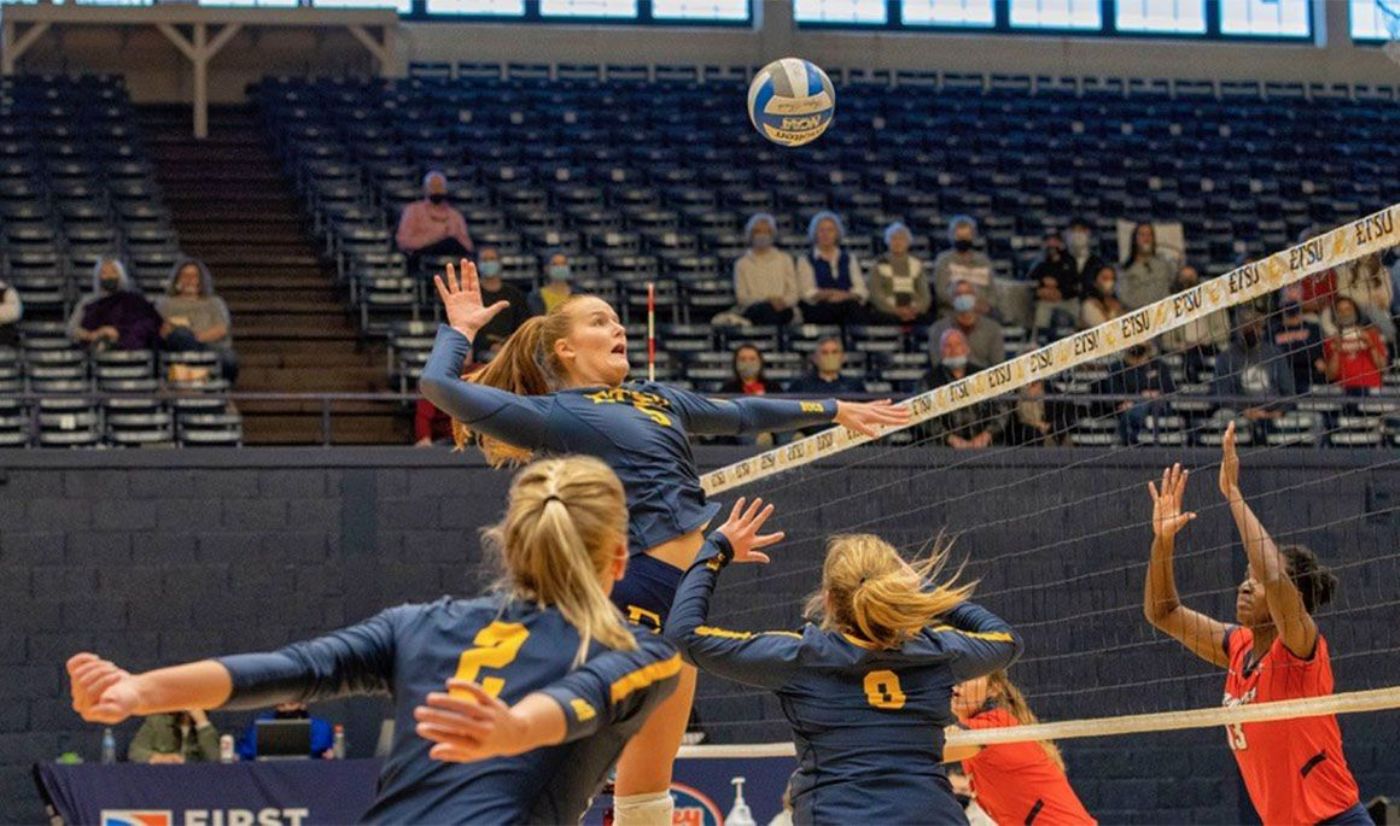 HOW IT HAPPENED
Set 1 (25-22 ETSU): Like they did in the first match of the weekend, the Bucs took the first set of the match. ETSU and Samford kept the first frame close in the beginning, but the Blue and Gold took a lead at 11-10 and never gave it up. ETSU went on a 4-0 run at that point with two kills, a block and an Asia Mattress (Mauldin, S.C.) ace. The Bucs kept a two-point lead throughout the rest of the set and clinched the first frame with Sara Esposito’s (Venezia, Italy) second kill of the match. For the first time in the weekend series, both teams hit above .240 in a set.

Set 2 (25-5 SAM): Samford began the second set winning six of the first seven points. After an ETSU timeout, the Bulldogs won the next seven and held a 14-1 lead. The Bulldogs closed out the second set with a 25-5 victory. Samford hit .435 in the set with just one error on 23 swings. Samford also slotted four aces and tallied four blocks.

Set 3 (25-21 SAM): Samford started the second set with a 5-1 lead, but ETSU battled back early this time. The Blue and Gold kept the second frame within three points until Samford led 14-10 and Coach Jenkins called timeout. Out of the timeout, the Bucs won five straight with two kills and two Bulldogs errors to force Samford to call their first timeout. The Bucs and the Bulldogs went back and forth with the next handful of points until a kill from Briana Holmes put Samford up 21-18. The ‘dogs closed out the set winning four of the next seven points to take a 2-1 lead in the match. Both teams hit under .200 in the third stanza, while Samford had seven service aces compared to ETSU’s four.

Set 4 (25-14 SAM): The beginning of the fourth mirrored the first set with the two teams staying with each other throughout the first 17 points. The Bulldogs won three straight points with a block from Lauren Deaton and two kills from Holmes. With a 11-8 lead, Samford stepped on the gas. The Bulldogs won 14 of the next 17 points to close the match. The visitors hit .348 in the frame compared to ETSU hitting -.033.

Sanne Maring (The Netherlands) led the team with eight kills and four blocks. In the back row, Sydney Cherney (Knoxville, Tenn.) recorded 14 digs.

Deaton led the match with 16 kills and tallied a double double with 11 digs. Emily Naubert led the match in aces for the second consecutive day with four.

INSIDE THE NUMBERS
ETSU falls to 4-6 in the SoCon while the Bulldogs lead the league with a 9-1 record.

UP NEXT
The Bucs are back in Brooks Gym next weekend for a series with The Citadel beginning on Sunday, March 14 at 3 p.m.