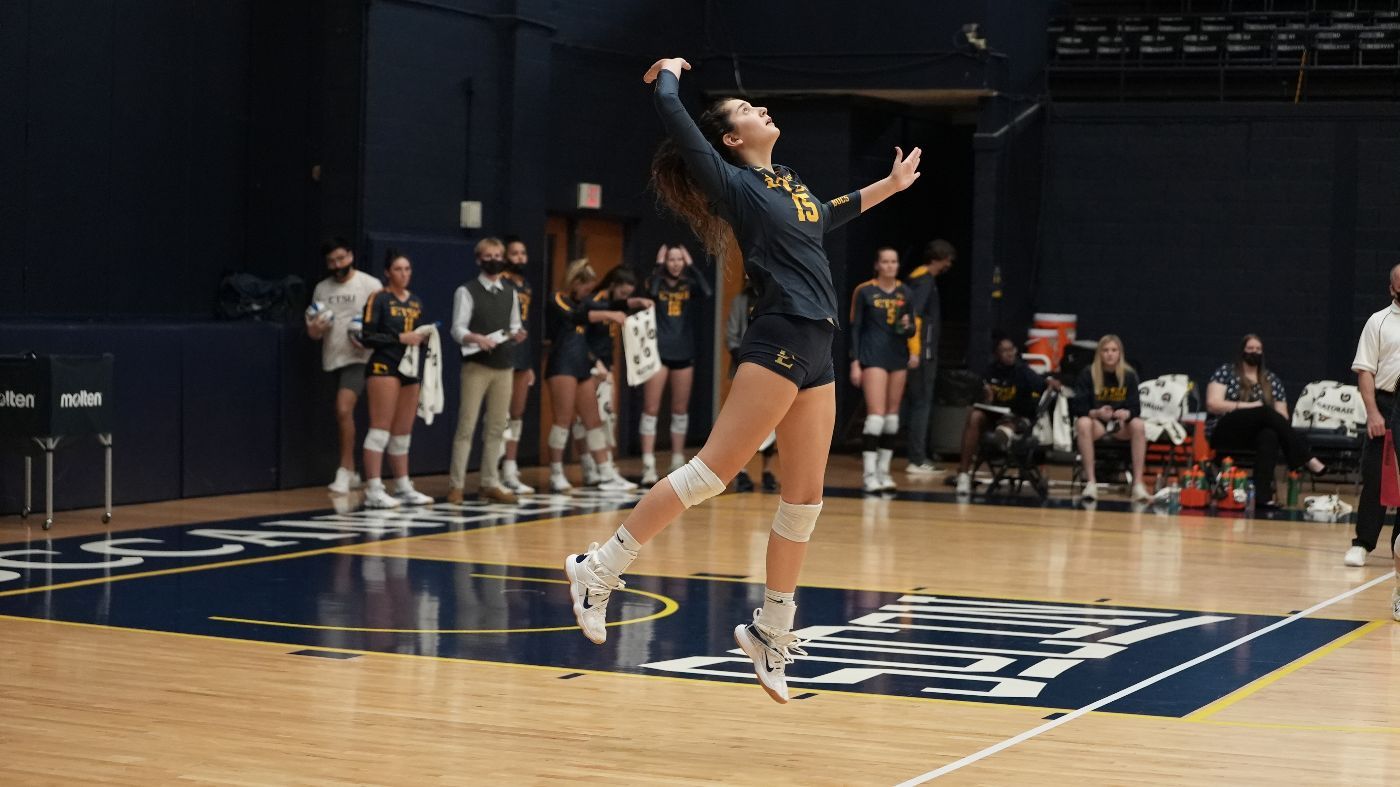 HOW IT HAPPENED
Set 1 (25-20 ETSU): After alternating the first three points of the match, the Bulldogs went on a 4-0 run to hold an early 5-2 lead. Esposito recorded a kill and a solo block to bring the Bucs within one at 7-6. The Bucs and the Bulldogs alternated points from that moment on until ETSU took an 18-15 lead with Esposito’s fifth kill of the set. With a 22-20 lead, the Bucs won the next three points, capitalizing on Bulldog errors to take the set. Forster led the set with seven kills, while Asia Mattress (Mauldin, S.C.) hit .750 with three kills on four attempts.

Set 2 (25-14 ETSU): The Bucs and the Bulldogs stayed tied throughout the majority of the beginning of the second stanza until the Bucs took a three-point lead at 11-8 with a kill from Sidney Sherrill (Knoxville, Tenn.). After a Citadel timeout down four, the Bucs kept the foot on the gas and went on a 9-3 run to lead 20-13. The Bucs closed out the set allowing one more point to the Bulldogs with kills from Mattress, Sherrill and Forster. ETSU hit .577 in the second with 17 kills and two errors. Forster continued her dominance with six kills on seven swings to host a .857 clip.

Set 3 (25-22 ETSU): The third set was the closest of the match and was the only one that did not feature any lead changes. The Bucs took a lead from the first serve with a kill from Sanne Maring (The Netherlands) and never gave it up. The Bulldogs kept the Bucs honest keeping the set within five. With the largest lead of the frame, up 19-14, The Citadel used three ETSU errors to force Coach Jenkins to call her first timeout of the match. Out of the timeout, the Bulldogs completed the 5-0 run to tie the set at 19, but never took the lead. After a Citadel attack error, the Bucs used a block and two kills from Esposito to hold a four-point 23-19 lead. The Bucs took the match on Esposito’s 16th kill and a service ace from Sydney Allen (Gaffney, S.C.).

UP NEXT
The Bucs and the Bulldogs wrap up the season series on Monday in Brooks Gym. First serve is set for 5 p.m.