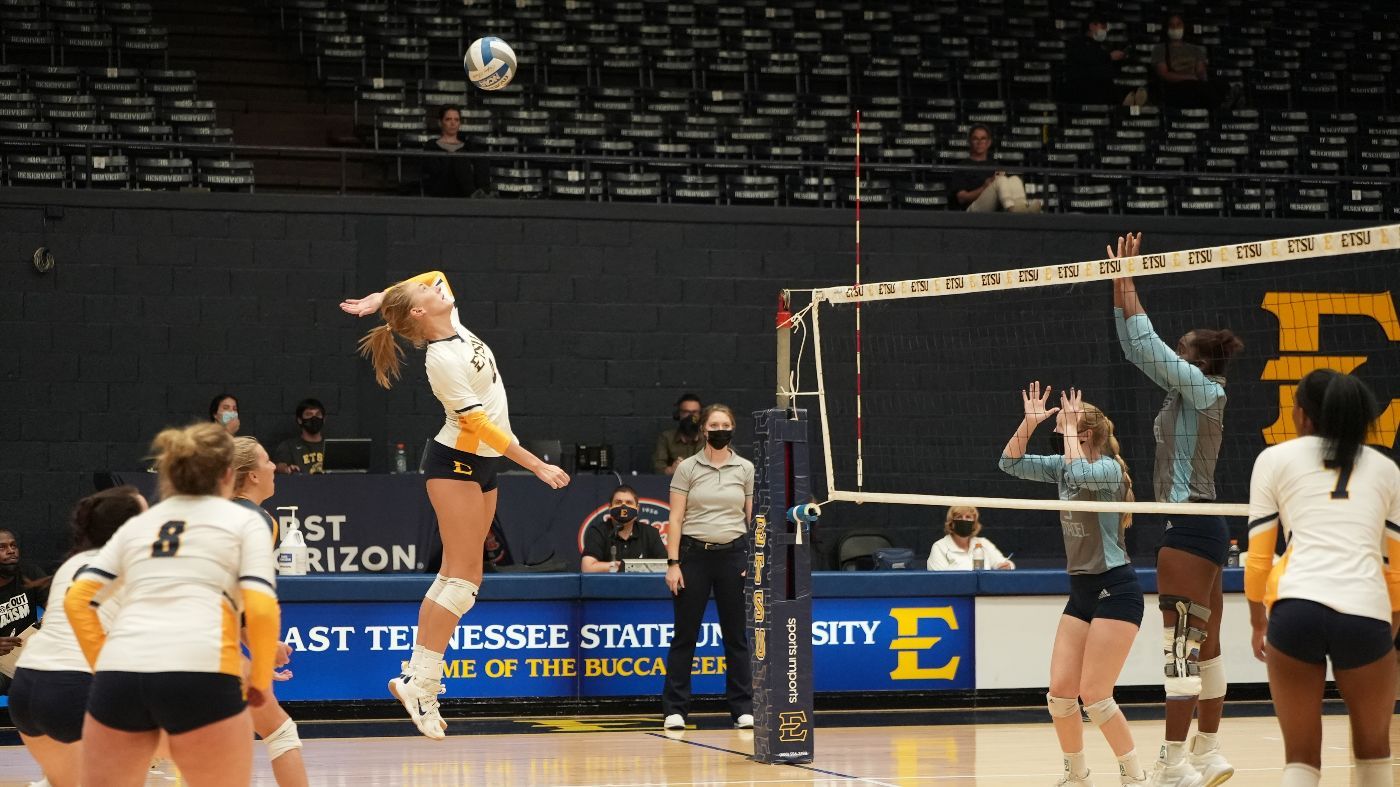 Set 1 (25-16 ETSU): The Bulldogs took five of the first six points in the first set, but their lead did not last long. ETSU battled back to tie the set at seven and then took the lead. The Bucs went on a 12-5 run to ultimately put the set out of reach. ETSU used five kills from Jenna Forster (Maryville, Tenn.) and four from Sara Esposito (Venezia, Italy) to take the first set 25-16, hitting .250 in the frame.

Set 2 (25-21 ETSU): Like the first frame, the Bucs and the Bulldogs battled back and forth until ETSU took an 11-9 lead. After a 5-1 run by ETSU, the Citadel came back to take a lead at 17-16. The Bucs used kills from Asia Mattress (Mauldin, S.C.) and Forster to create another run and take a four-point lead, 22-18. The Blue and Gold closed out the set with Forster’s 11th kill of the evening to take a 2-0 lead in the match. The second stanza featured 10 ties and six lead changes.

Set 3 (25-21 CIT): The Citadel jumped out to its biggest lead of the match with a 9-0 run to begin the third frame. Still down nine, at 13-4, Coach Benavia Jenkins called her second and final timeout. The Bucs inched into The Citadel lead, but could not overcome the Bulldogs’ strong start. The visitors hit .256 in the frame with Preseason All-SoCon selection, Sharlissa de Jesus leading the charge with five kills on 11 swings without an error. The third set was the only one that did not feature a tie or lead change.

Set 4 (25-22 CIT): As they did in the third set, the Bulldogs began the fourth strong, but the Bucs stopped them early. Down 5-1, ETSU battled back to bring its deficit to two at 6-4. After a 4-0 run by the ‘dogs, ETSU came back once again, and ultimately took the lead with a 5-0 run by Mattress behind the service line. Throughout the run, Mattress slotted two aces and a kill. With the score deadlocked at 21, The Citadel won three of the next four points to force a fifth set. The Bulldogs hit .333 in the fourth frame, a match-high for either team.

Set 5 (15-13 CIT): ETSU got off to its best start in the match with a 5-0 lead early. The Bulldogs came back quick with a 6-1 run to tie the set at six with three kills from de Jesus. The set was ultimately tied at 11 when pin hitters Esposito and Melanie King exchanged kills. The Citadel used King’s second kill of the match to take a 13-12 lead and after a service error, the final frame was tied at 13. With either team needing to win two points in a row to close out the match, The Citadel rose to the occasion, winning the next two off a Buc error and an ace from King.

UP NEXT
The Bucs travel to Mercer for their final road trip next weekend beginning Sunday, March 21.