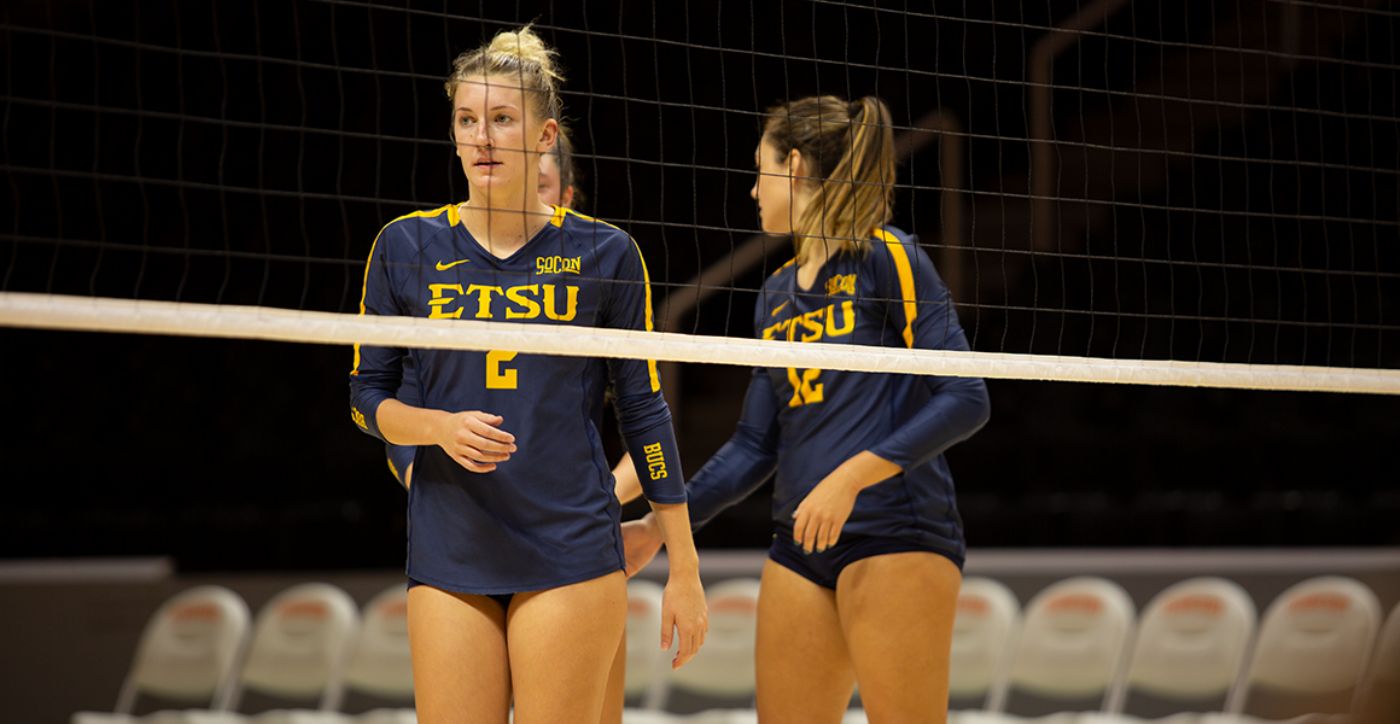 KNOXVILLE, Tenn. (Aug. 27, 2021) – ETSU’s volleyball team opened its fall 2021 campaign in an entertaining fashion, dropping the first contest to Texas Tech 3-0, but the Bucs responded with a sweep of their own against NC State. This was the program’s second win against NC State, their second straight over the Wolfpack and the Bucs’ seventh win over a Power-5 program in the last five seasons.

Set 1 (Texas Tech, 25-20): Texas Tech got off to a hot start, winning the first four points of the match before ETSU got on the board with a kill from Sara Esposito (Pianiga, Venezia, Italy). She would finish with four in the set. Taylor Roberts (Sneads, Fla.) started the game strong with five digs in the first set, she would finish with a match-high 18. Lundyn Coffman (Nolensville, Tenn.) recorded two solo blocks in this set, as ETSU recorded all three of its team blocks in this set. The Bucs hit just .156 compared to the Red Raiders’ .222.

Set 2 (Texas Tech, 25-19): In a set that saw nine ties and four lead changes, the Bucs hung close until a late 5-0 run helped propel the Red Raiders to take this set. Vazquez posted five kills in the frame, bringing her total to ten in the match thus far. Texas Tech got numbers from all of their starters, in which they posted 15 kills, 14 assists, and four blocks in that set alone. The Red Raiders hit a whopping .467 in the set.

Set 3 (Texas Tech, 25-21): In a closer set of 12 ties and two lead changes, the Bucs garnered a 5-0 run highlighted by two kills from Vazquez and one from Jenna Forster (Maryville, Tenn.) to give them their biggest lead of the match midway through the set. Texas Tech would eventually put this one away with two Buc attack errors and an ace. Vazquez and Forster led the Bucs with three kills that set, while Coffman and Abbey Thomas (Goldsboro, N.C.) each posted two. Esposito posted another ace to give her two for the match.

The Bucs swept NC State in straight sets (28-26, 28-26, 30-28), but those sets were far from short. The three-set contest lasted just under two hours, but it felt way longer on the court. The match featured 22 ties and 13 blocks, highlighted by Lundyn Coffman (Nolensville, Tenn.) who contributed two solo blocks and six block assists. Vazquez posted her first double-double as a Buc with 11 kills and 12 digs.

Set 1 (ETSU, 28-26): The blocking started early for the Bucs, posting five in the first set getting production from Coffman, Jenna Forster (Maryville, Tenn.), and Sara Esposito (Pianiga, Venezia, Italy). The first set was as back-and-forth as it could get, with 13 overall ties and only two lead changes. Both teams hit under .200, but five service errors and two block errors were the difference in this tight set. Josannah Vazquez (Mansfield, Texas) paced the Bucs with six kills, including the team’s final three.

Set 2 (ETSU, 28-26): While the set result was the same, the second set was very similar to the first. The Bucs used six blocks and only two attack errors to take the stanza from NC State. The Wolfpack led as many as six, but timely kills from Forster and Esposito brought the Bucs back into it. ETSU held NC State is just a .128 hitting percentage, and only 11 kills from the Bucs were enough this set to take a much-needed 2-0 lead.

Set 3 (ETSU, 30-28): The longest set of the match, the Bucs needed everyone to contribute to seal the deal on this contest. ETSU jumped out to a 10-4 lead before the Wolfpack slowly started crawling back before eventually tying the match at 24. The Bucs won the point every time the two were tied this set, but were able to finish the match on an attack error from NC State. Esposito had her best set thus far with five kills on ten attempts and no errors. The Bucs were blazing this set, hitting .311 as a team.

"Today was a pretty good day for the Bucs. Even though some of us are younger, we were able to get good experience today," said Jenkins.

"Our freshman setter Caroline Dykes played a huge role in putting up nice sets for the attackers. She is making that transition into a faster-paced college game and she did well today. I also have to give credit to our players on the bench. They brought nothing but positive energy no matter what the scoreboard showed."

ETSU wraps up play in Knoxville Saturday afternoon when the Bucs take on the host Volunteers. First serve is set for 12:30 p.m.