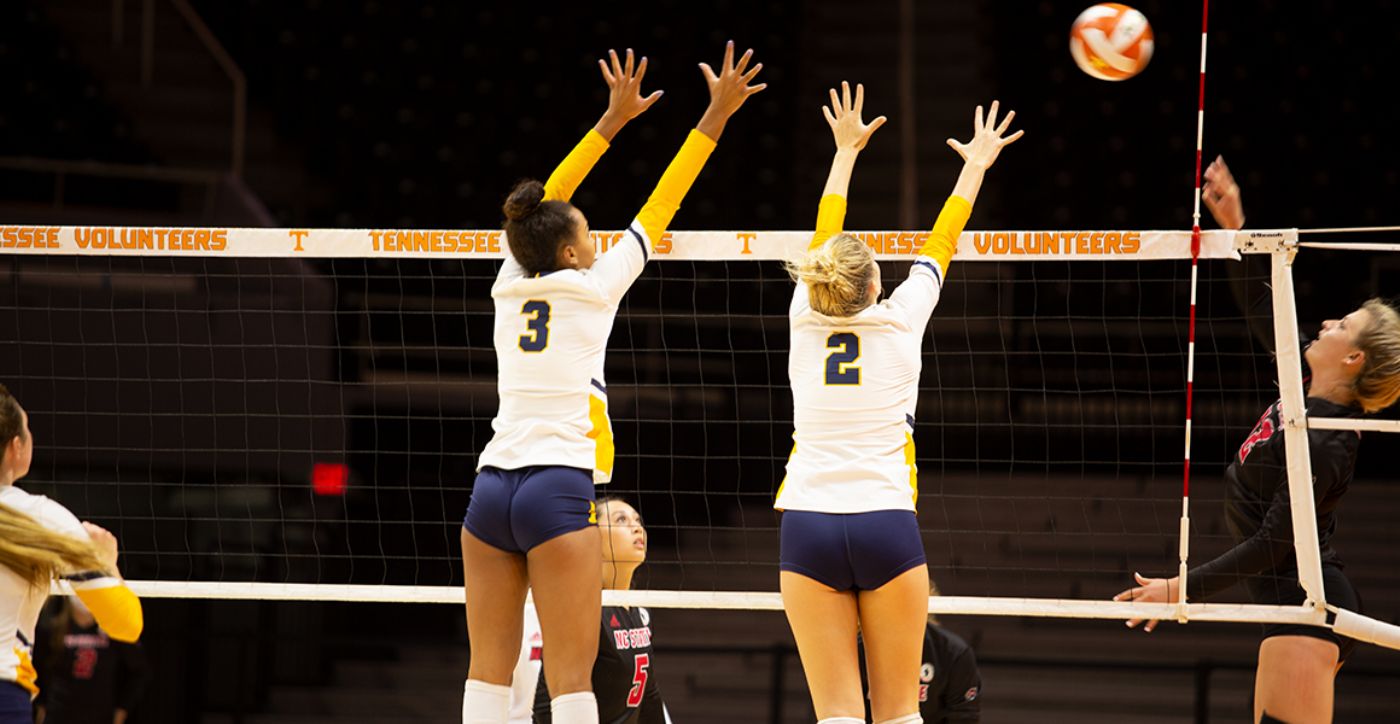 JOHNSON CITY, Tenn. (Sept. 2, 2021) – ETSU kicks off their second pre-conference tournament just on the other side of the Blue Ridge Mountains, facing the likes of Old Dominion, Kansas City (UMKC), and Appalachian State. The Bucs will play Old Dominion and UMKC for the first time ever, while App. State and ETSU have a long history, playing their 59th match.

The Bucs went 1-2 this past weekend at the Tennessee Classic, highlighted by a sweep over NC State (28-26, 28-26, 30-28). The Bucs held the Wolfpack to just .186 hitting and recorded 13 total blocks, their most since 14 against Furman on February 1st, 2021. Josannah Vazquez (Mansfield, Texas) led the Bucs with 11 kills, while Jenna Forster (Maryville, Tenn.) also added 10. Lundyn Coffman (Nolensville, Tenn.) had herself a great afternoon, tallying a career-high eight blocks. This was the second time ETSU has defeated NC State, doing so in back-to-back meetings. This was also Coach Jenkins’ first Power-5 win in her coaching career. ETSU last played App State on Sept. 11, 2018 where the Bucs swept the Mountaineers in straight sets (25-11, 25-15, 25-20). ETSU started hot and didn’t let up, hitting .423 in the first set and finished the match with 45 kills on .357 hitting. The Bucs were in Boone for the App State Invitational the year before, defeating ACC opponent Virginia and host App State before falling in four sets to Towson.

In just their second season of competition, the Monarchs are 1-2 on the season thus far, defeating Hampton in four sets before falling to West Virginia and Loyola Maryland. ODU went 7-11 in their first season of action, winning their first-ever match against George Mason 3-0. ODU is coached by Fred Chao, who is coming from a historic men’s volleyball program in George Mason. Chao, a three-time EIVA Coach of the Year, is second in George Mason history in wins with 245. The Monarchs return statistical leaders in Alessia Sgherza (220 kills), Teresa Atilano (586 sets), and Hailey Duncan (58 blocks).

The first meeting between the Roos and the Bucs, UMKC has developed a very good volleyball program over the last few years. The Roos went 13-4 this past spring, playing only teams in the Summit League, returning to the conference after seven seasons in the WAC. They start 2-1 this season after victories over Saint Louis and Missouri. UMKC features Melanie Brecka, an AVCA Honorable Mention All-American from this past season, only the second to ever do so in UMKC history. Brecka was also awarded Conference Player of the Year and First Team All-Midwest Region. The Roos are coached by Christi Posey, who enters her 11th season and already has the most wins in UMKC volleyball history.

App State starts the fall campaign 2-1 after a home invitational, in which they host three before going to East Carolina’s tournament the weekend before conference play. The Mountaineers picked up two five-set wins over Eastern Kentucky and Radford before being swept by SoCon opponent UNCG. App State finished just 1-15 this past spring in Matt Ginipro’s 14th season with the program. The Mountaineers are three years removed from a regular season Sun Belt championship in which they ended the season on an eight-game winning streak heading into the postseason tournament. The Mountaineers lead the all-time series against ETSU 40-18.