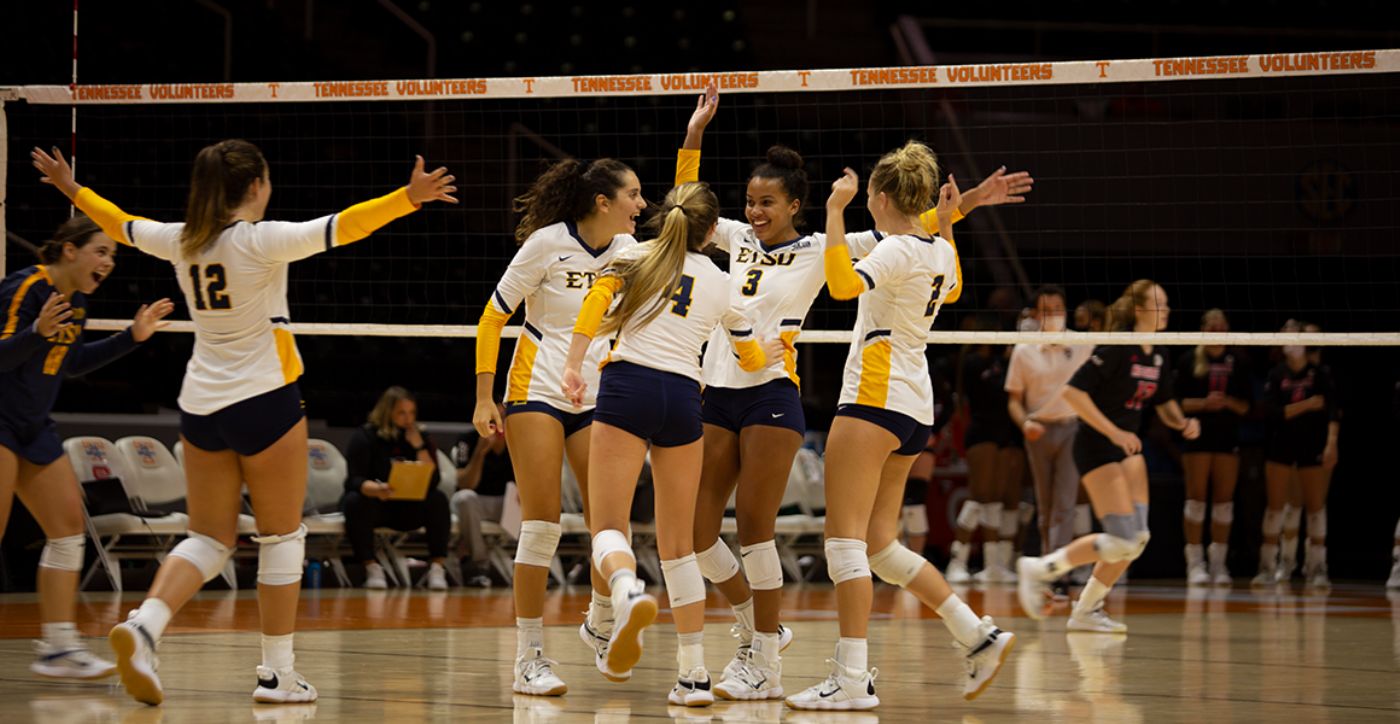 BOONE, N.C. (Sept. 3, 2021) – ETSU’s second weekend of volleyball starts with a high and a low, defeating Old Dominion in four sets before falling to UMKC in three. This is the first time the Bucs have faced either program. The Bucs are now 1-2 all-time against Summit League opponents, while ODU is the 9th Conference-USA opponent ETSU has faced all-time.

After trading 25-19 sets, the Bucs were victorious over Old Dominion (25-19, 19-25, 25-21, 25-8) in their first-ever meeting after a completely dominant performance in the fourth set. After playing their first three matches in three sets, the Bucs were prepared for the challenge after the Monarchs tied the game at 1. Josannah Vazquez (Mansfield, Texas) led all players with a career-high 19 kills, while Lundyn Coffman (Nolensville, Tenn.) also posted double-digit kills for the first time this season.

Set 1 (ETSU, 25-19): ETSU started the set on a 5-1 run with a solo block from Coffman and kills from Vazquez and Forster. ODU cut the lead to two late in the set, but efficient hitting from Coffman and Forster allowed the Bucs to pull away. The Bucs lead the entire set, hitting .300 compared to the Monarchs’ .062. ETSU controlled the net, with two blocks from Coffman and one from Forster. Sara Esposito (Pianiga, Venezia, Italy) sealed the deal with three kills in Bucs’ final five points. Jenna Forster (Maryville, Tenn.) led the Bucs with four kills this set, while Coffman, Esposito, and Vazquez each contributed three.

Set 2 (ODU, 25-19): ODU started on a 4-0 run before Vazquez gave the Bucs their first two points of the set. ETSU rallied in the middle of the set to cut the lead to one, but the Monarchs pulled away late with a 9-4 run to go along with .500 hitting. This was the only set the Monarchs hit over .100 in a set. Vazquez finished the set with eight of the Bucs' 13 kills. Esposito was the last Buc to have eight or more kills in a set, doing so in the third set of a five-set loss to The Citadel. The Bucs hade six attack errors compared to ODU’s two.

Set 3 (ETSU, 25-21): After dropping the first two points of the set, the Bucs snagged the next six featuring kills from Coffman and Forster while adding an ace from Vazquez. The two squads would trade runs late in the set, but the Bucs pulled away late. Neither team hit well this set, both finishing under the .200 line. Caroline Dykes (Flower Mound, Texas) spread the ball the entire set, finishing with 12 assists as six Bucs recorded a kill.

Set 4 (ETSU, 25-8): Taylor Roberts (Sneads, Fla.) started the set with two aces, and the Bucs never looked back. The Bucs led by double-digits at the 14-4 mark, and held that large of a lead until the end. Vazquez recorded her 10th dig this set, notching her second double-double of the season. She would finish with 19 kills and 12 digs. ETSU got contribution from everyone this set, with five of the team’s seven aces coming in this set from Roberts, Esposito (2), and Coffman. The Monarchs won back-to-back points only twice in the set, at the beginning and the end. The Bucs hit .385 with only two attack errors.

Set 1 (UMKC, 25-19): The Bucs led once at the 5-4 mark, but a 5-0 run from UMKC late sealed the first set. Forster was the focus of the offense, starting with a perfect six kills on six attempts. She finished the set with seven kills and no errors on 11 attempts. Asia Mattress (Mauldin, S.C) and Josannah Vazquez (Mansfield, Texas) each added three kills this set. The Bucs didn’t record an ace or a block this set.

Set 2 (UMKC, 25-23): ETSU led by as many as seven this set, but the Roos slowly crawled back to tie the set at 16. The two traded the next few points before Melanie Brecka scored the final two UMKC points. Forster continued her offensive performance with five kills on seven attempts, bringing her total thus far to 12 kills on 18 attempts. Dykes recorded her 10th dig this set, sealing her second career double-double. Dykes, Coffman, and Mattress each recorded blocks this set. UMKC managed to hit .359 compared to ETSU’s .220.

Set 3 (UMKC, 25-21): After the Roos took the first point of the set, both teams traded scoring runs until midway through the set. UMKC took a 9-0 run early on to distance themselves from the Bucs, but ETSU responded with three consecutive aces from Dykes to tie the set at 18. Forster and Chloe Dupuis (Poquoson, Va.) each stalled UMKC’s match point until Odyssey Warren closed the book on this match. Johnson and Vazquez each recorded solo blocks, both of their firsts this season.

ETSU finishes the weekend in Boone against the host Mountaineers. First serve is set for 1:30 p.m.