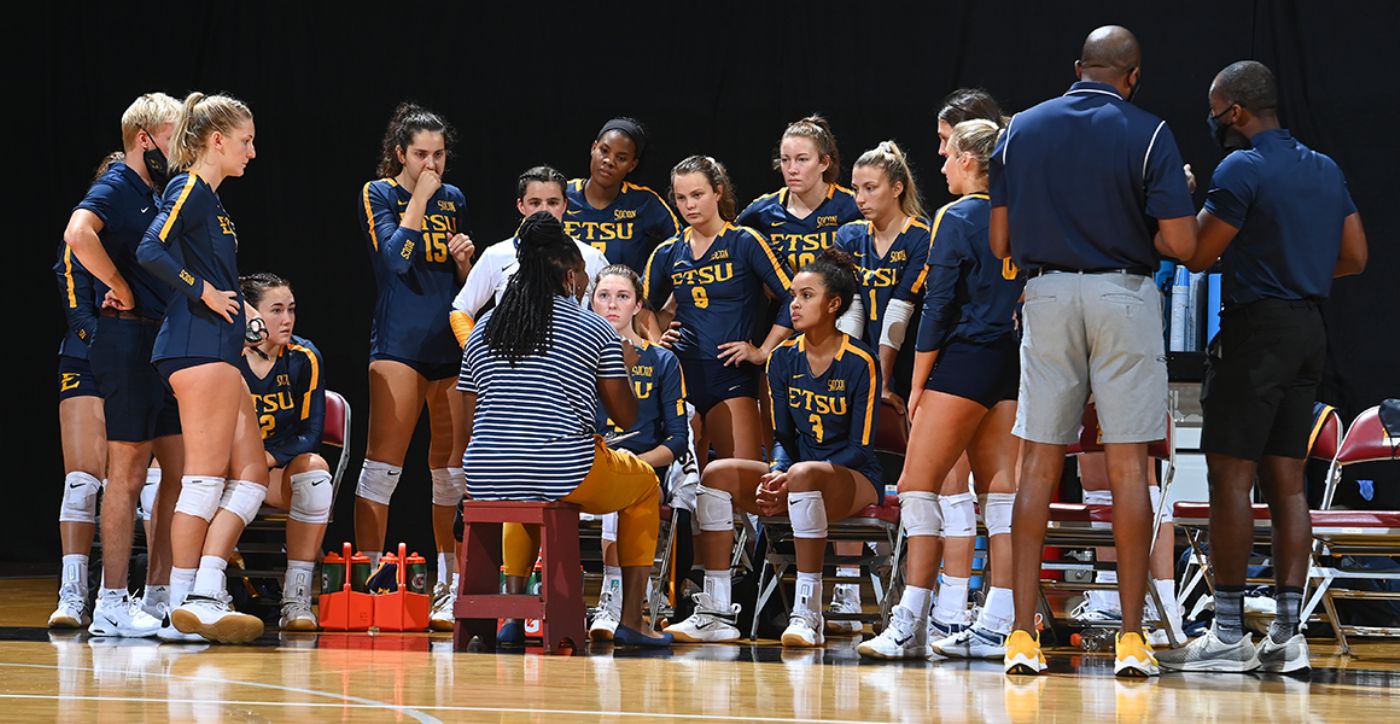 ROCK HILL, S.C. (Sept. 11, 2021) – The ETSU Buccaneers might not have started the weekend they were hoping, but they sure did finish it on an exciting note, turning the tables against Winthrop and sweeping the Eagles (25-18, 25-17, 25-23). ETSU ended the match on a 7-0 run with kills from Sara Esposito (Pianiga, Venezia, Italy), Lundyn Coffman (Nolensville, Tenn.), Josannah Vazquez (Mansfield, Texas), and Jenna Forster (Maryville, Tenn.). ETSU is now 3-1 in games after they were swept, and this is ETSU’s second sweep of the season (vs. NC State, 8/27/21).

Set 1 (ETSU, 25-18): ETSU started early and kept the lead consistent. Winthrop cut the lead to as little as four late in the set, but two costly attack errors and a kill from Coffman put the Bucs ahead. Esposito led the Bucs’ charge with five kills and no errors on nine attempts. Winthrop had three service errors to aid ETSU’s lead. The Bucs also outpaced the Eagles in hitting percentage, .278 to .229.

Set 2 (ETSU, 25-17): A back-and-forth start didn’t last too long before ETSU pulled away with a 5-1 run in the middle of the set. Coffman was dominant in the final stages of the set, coming away with three kills and a block for the Bucs’ final four points of the set. Coffman and Forster combined for three of the four ETSU blocks this set, while Caroline Dykes (Flower Mound, Texas) and Asia Mattress (Mauldin, S.C.) also pitched in on the blocking side. Despite only producing 11 kills this set, Winthrop recorded 10 attack errors as the Bucs took the second set handily.

Set 3 (ETSU, 25-23): It was a flipped script to start the third set, with Winthrop taking the early advantage on efficient hitting from Brookelynn Thomas and Morgan Bossler. Winthrop took a 23-18 lead off a ball handling error from Coffman, but ETSU stole the show. The Bucs would tally seven straight kills from four different hitters (Esposito, Coffman, Vazquez, and Forster) to take the third set in an emphatic fashion. The first three from Esposito, Coffman, and Vazquez forced Winthrop’s first timeout, but then Vazquez and Forster went back-to-back to tie the match at 23. The two went right back to business to seal the deal. Those seven were part of the 20 kills ETSU tallied in this set, their most in a set this season.

The Bucs are back in South Carolina next weekend for the Big Orange Bash hosted by the Clemson Tigers. ETSU will face Rutgers, UNC-Asheville, and the host Tigers. The Bucs’ first match is against Rutgers on Sept. 17th, with the first serve scheduled for 10 a.m.