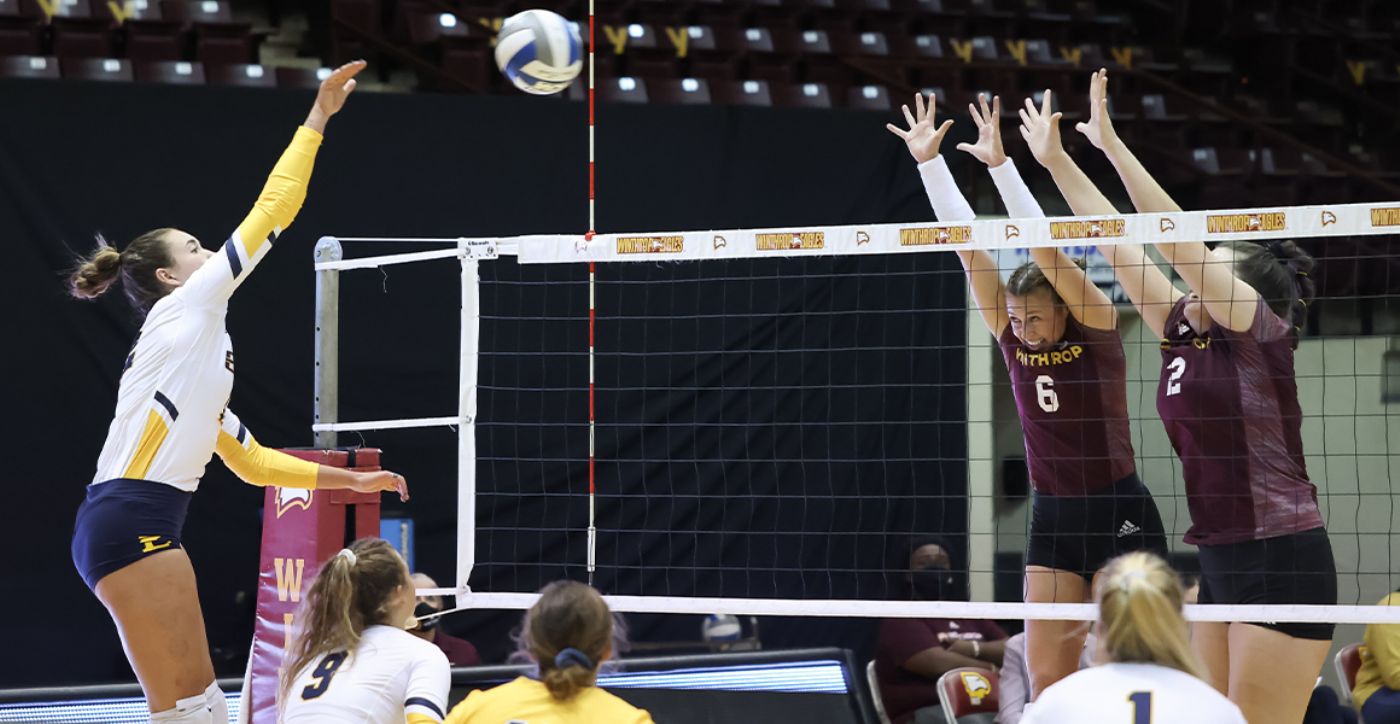 ETSU squares off against Rutgers, UNC-Asheville, and Clemson

JOHNSON CITY, Tenn. (Sept. 16, 2021) – The final weekend of non-conference volleyball is upon us, as the Bucs are set to play two more Power 5 schools in Rutgers and Clemson down in the Palmetto State. This will be the first matchup between ETSU and Rutgers, while the Bucs last saw Clemson in 2018 at the Gamecock Invitational. ETSU is also scheduled to play UNC-Asheville, their first meeting since 2012.

The Bucs are coming off a weekend split with Winthrop, dropping the first match 3-0 and responding with a sweep of their own the following day. (insert sentence regarding the first matchup) Saturday’s match was a flipped script, with ETSU dominating in all phases of the match. Sara Esposito (Pianiga, Venezia, Italy) led the team in kills with 11, while Josannah Vazquez (Mansfield, Texas) also contributed 10 of her own. Three Bucs notched double-digit digs (Taylor Roberts (Sneads, Fla.), Caroline Dykes (Flower Mound, Texas), and Sydney Cherney (Knoxville, Tenn.)) in a great defensive effort to keep the Bucs ahead. Despite being down 23-18 in the third set, ETSU rallied off seven straight kills to take the match. ETSU held Winthrop to a .111 hitting percentage despite hitting .263 the night before.

ETSU’s most recent matchup against these three teams was Clemson in the Gamecock Invitational in 2018. After dropping the first set in that match, ETSU stormed back to take the next three on Leah Clayton’s 23-kill performance. The Bucs hit .266 with 60 kills, dominated by a fourth set that featured 18 kills and two errors. ETSU has an extended history with UNC-Asheville, with the Bucs ahead in the all-time series 23-20. This is the first-ever matchup between ETSU and Rutgers.

The Scarlet Knights are off to a great start to the season, featuring a 7-2 record and 2-1 record this past weekend as they hosted their invitational. Their most recent loss was a five-set match against North Carolina State, a team ETSU swept in their first weekend over in Knoxville.

Rutgers went 6-14 in the abbreviated spring season, but most of those losses came against Top-25 programs in Wisconsin (who was ranked #1 at the time of their match), Nebraska, Ohio State, Purdue, and Penn State. Rutgers is led by Caitlin Schweihofer, who is in her second season as head coach. The Scarlet Knights are led statistically by Beka Kojadniovic (102 kills), Inna Balyko (298 assists), and Shealyn McNamara (46 blocks).

UNC-Asheville starts the fall season 2-5, with wins over NC Central and SoCon foe Western Carolina. The Bulldogs went 8-8 this past spring with two wins over Winthrop, who both are members of the Big South Conference, and recently came off a 1-1 weekend with a sweep over NC Central and falling to Elon in three sets.

The Bulldogs are led by Frederico Santos, who just recently finished his 10th season as head coach of UNC-Asheville. The Brazilian native has over 100 career collegiate wins and over 20 seasons of volleyball coaching experience. UNC-Asheville is led statistically by Molly Hackett (73 kills), Anna Skyrd (five aces and 87 digs), and Lexy Cole (13 blocks).

The Clemson Tigers begin the fall campaign 5-3 after dropping matches to UCF and South Carolina while taking down SoCon-favorite Samford in three sets. The Tigers played last night in Jervey against Georgia State and won handily 3-0. The second ACC opponent that ETSU will face this season, the Tigers went 12-10 last season and 6-9 in ACC play despite playing top-ranked programs like Georgia Tech and Pittsburgh.

First-year head coach Jackie Simpson Kirr takes over the program this fall after serving as an associate head coach for the past four seasons. A two-time All-American setter at Wisconsin, Kirr enters her second head coaching stint after being in a similar position at George Mason. Clemson is led statistically by Kaylee Martin (89 kills), Devan Taylor (105 digs), and Ava Pritchard (29 blocks).