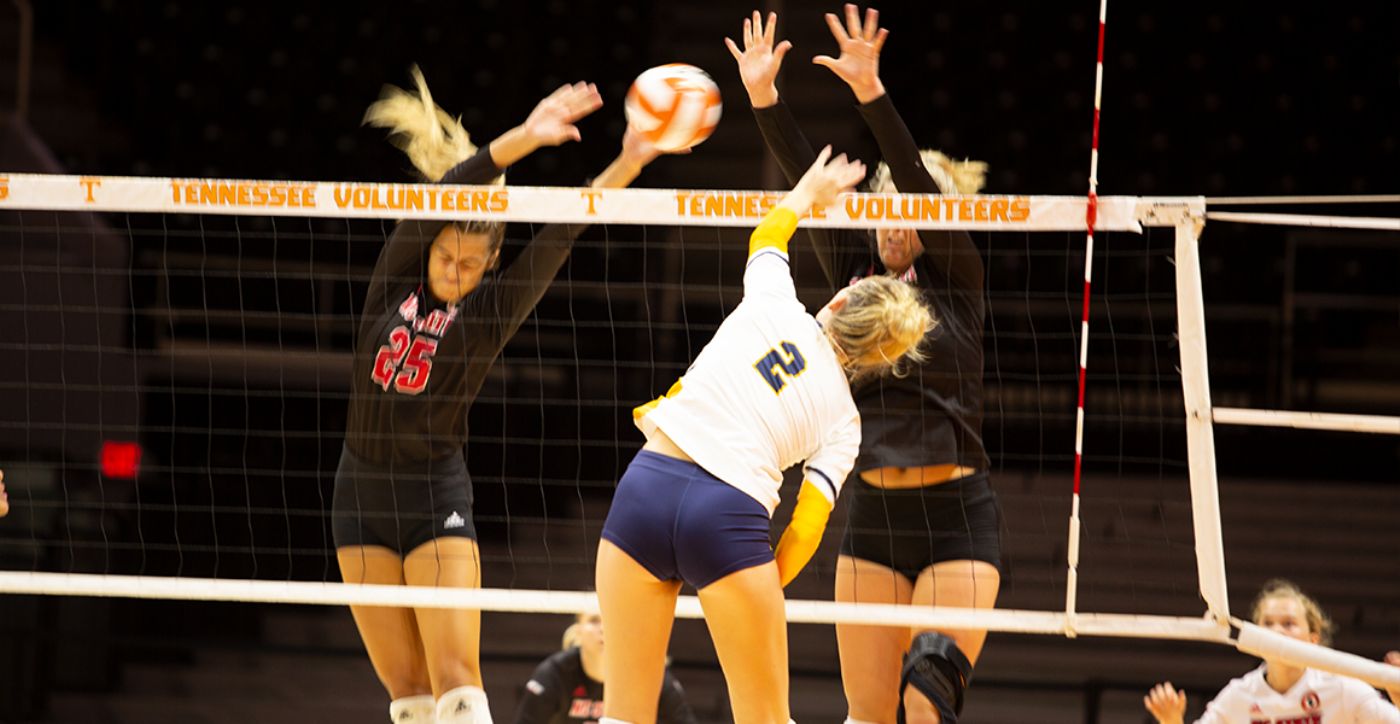 The sophomore posted 27 kills on .382 hitting on the day

CLEMSON, S.C. (Sept. 17, 2021) – ETSU’s final weekend of non-conference play started with energy and grit in both of the Bucs’ matches. Despite falling to Rutgers in four sets, ETSU responded dominantly with a sweep against UNC-Asheville. Sara Esposito (Pianiga, Venezia, Italy), Jenna Forster (Maryville, Tenn.), and Josannah Vazquez (Mansfield, Texas) each recorded 10+ kills in both matches, and all three had a hitting percentage over .250 in total.

In their first-ever matchup, ETSU had one of their closest matches fall in favor of the Rutgers Scarlet Knights (24-26, 23-25, 27-25, 25-22) for their eighth victory of the season. ETSU managed to stave off the sweep in the third set thanks to clutch kills from Asia Mattress (Mauldin, S.C) and Sara Esposito (Pianiga, Venezia, Italy). The Bucs weren’t able to hang on to a small lead in the fourth, even after scoring three-straight with Rutgers at match point. ETSU’s 56 kills and .260 hitting percentage are season-bests.

Set 1 (Rutgers, 26-24): A total of 15 ties and six lead changes, this set showed the tone and competitiveness of the rest of the match for both teams. Neither team had a sizeable lead, and the largest scoring run was 5-0 in the middle of the set with Esposito serving. An attack error from Rutgers forced a 24-24 score, but ETSU committed a service and attack error to end the set. ETSU outpaced Rutgers only in blocks, with Lundyn Coffman (Nolensville, Tenn.), Jenna Forster (Maryville, Tenn.), Josannah Vazquez (Mansfield, Texas), and Mattress each recording a block. Vazquez led the Bucs with four kills this set while Forster and Esposito each added at least a pair. Rutgers committed three service errors and three ball-handling errors to help ETSU keep the set close.

Set 2 (Rutgers, 25-23): ETSU got off to a great start thanks to Esposito’s three straight aces. She would finish with five of the team’s six. A 5-1 run in the middle of the set forced Rutgers to take the first timeout of the set for either team, as Vazquez and Forster each tallied two during that scoring run. Rutgers would keep ETSU’s lead minimal until a scoring run of their own late in the set. ETSU battled back to force a tie at 23 after a Forster kill, but a kill from Rutgers’ Shea McNamara put the Scarlet Knights up 2-0. Forster was on fire this set, notching five kills on nine attempts with no errors. Mattress and Vazquez each added to their block total this set, but five Rutgers aces and only two errors turned out to be the difference.

Set 3 (ETSU, 27-25): It was Rutgers that took the lead early, but the trend continued with no large lead at any point in the set. The largest lead Rutgers had this set was six at the 22-16, but ETSU flipped their switch at that point. The Bucs would rally seven straight points with kills from Esposito (who also recorded an ace this run), Vazquez, Coffman, and Forster to take a 23-22 lead. The two would trade points until the 25 mark when Mattress and Esposito stole the sweep away from Rutgers. Esposito had a great set, notching five kills on 11 attempts and no errors, while Caroline Dykes (Flower Mound, Texas) recorded a whopping 17 assists. Mattress was nearly flawless herself, finishing the set with four kills on five attempts with no errors. The Bucs recorded 20 kills this set, achieving this feat in back-to-back matches.

Set 4 (Rutgers, 25-22): After taking the previous set, ETSU set themselves in a good position early thanks to a few Rutgers errors and kills from Forster and Esposito. The match stayed tight until midway when the Scarlet Knights took a 9-3 run late. The Bucs managed to score three with Rutgers at set point, but Beka Kojadinovic thwarted any comeback from ETSU. Despite hitting more efficiently this set, the Bucs weren’t able to record an ace compared to Rutgers’ two. Both Forster and Esposito recorded three kills this set, putting them both in the double-digit mark for the match.

Strong from the start, ETSU kept the first-set momentum to sweep UNC-Asheville (25-12, 25-22, 25-19). Sara Esposito (Pianiga, Venezia, Italy) led the Bucs with 14 kills while Jenna Forster (Maryville, Tenn.) wasn’t too far behind her with 13. ETSU’s second straight match with at least 50 kills was a dominant effort all around as the Bucs held the Bulldogs to a sub-.200 hitting percentage. This was the first time this season that ETSU had above a .300 hitting percentage as a team.

Set 1 (ETSU, 25-12): The Bucs started strong with a 6-0 run with contributions from a Caroline Dykes (Flower Mound, Texas) ace, and kills from Esposito, Forster, and Lundyn Coffman (Nolensville, Tenn.). UNCA was able to salvage a few points before ETSU dominated with another 6-0 run with three kills from Abbey Thomas (Goldsboro, N.C.), another ace from Dykes, and a couple of Bulldog attack errors. This put the Bucs up double-digits and didn’t look back. The middle blockers of Coffman and Thomas started on fire, both with three kills on their first three attack attempts. Esposito and Forster would also finish the set with four kills on eight attempts with no errors. ETSU didn’t record an attack error until the 23-11 mark. The team’s .457 hitting percentage in the first set is the highest in a set this season.

Set 2 (ETSU, 25-22): A closer set than the one before with 15 ties and six lead changes, UNCA kept pace with the Bucs until a couple of Bulldog miscues allowed ETSU to get ahead and stay that way. UNCA made things interesting by taking three straight off a few ETSU errors late in the set, but Forster and Josannah Vazquez (Mansfield, Texas) posted back-to-back kills to end the set. Neither team hit statistically well, but ETSU held the Bulldogs to a .033 hitting percentage with just eight kills and seven errors. Dykes recorded all of ETSU’s 14 assists in this set. Esposito was perfect hitting this set with five kills on five attempts, while Forster also added five on nine attempts.

Set 3 (ETSU, 25-19): The Bulldogs were the ones with the early advantage this set, but it didn’t last long. ETSU would go on a 5-2 run to take the lead and never gave it up. UNCA was never able to score more than two points in a row until late in the set when ETSU already had a five-point lead. The first timeout wasn’t called until the 23-17 point, but ETSU finished the deal with a kill from Vazquez and an error from UNCA. Another sweet hitting set for the Bucs as they tallied 17 kills on a .317 percentage. Vazquez finished the match strong with a set-high six kills on ten attempts with no errors. Forster added two of the team’s three aces this set.

ETSU finishes the weekend in Clemson against the host Tigers. First serve is set for 11 a.m. The match will be broadcasted on ACC Network Extra.