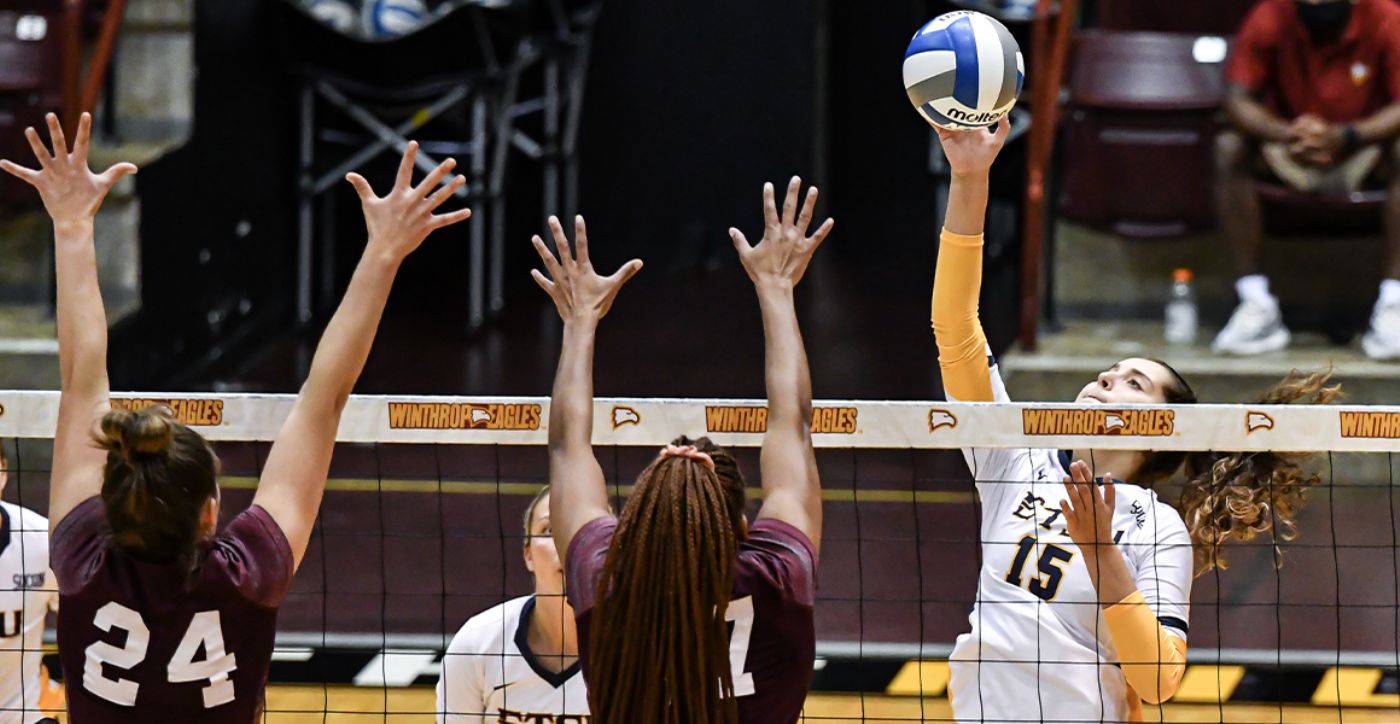 CLEMSON, S.C. (Sept. 18, 2021) – ETSU’s final match against a non-conference opponent lived up to expectations from the day before that this would be a great match. Despite Clemson dropping their first set all weekend, the Tigers were still able to outlast the Bucs in four sets (16-25, 26-24, 19-15, 24-26) after Jenna Forster’s (Maryville, Tenn.) impressive weekend in which she finished every match with at least 12 kills. The Bucs fall to 4-7 on the year after a difficult non-conference schedule that has prepared them well for conference play.

Set 1 (Clemson, 25-16): The Tigers were the ones out the gate to hold the small lead, but neither team started well as a combined six service errors occurred before either team could reach 10. ETSU was able to cut the deficit throughout the set, but a late 5-0 run created space between Clemson and the Bucs and the former of the two was able to hold off any comeback. Clemson salvaged a slow start by hitting .303 as a team compared to ETSU’s .094, their lowest in a set this weekend. ETSU didn’t record a block this set and only tallied one ace from Lundyn Coffman (Nolensville, Tenn.).

Set 2 (ETSU, 26-24): ETSU responded in the second set strong, taking the early lead but nothing marginal. The Bucs led by as many as four, but Clemson scratched away and eventually tied the set at 22. Both teams went on to score two straight to create another tie at 24, but Sara Esposito (Pianiga, Venezia, Italy) and Forster tallied back-to-back kills to tie the match at one. The Bucs responded in many ways in this set, including a match-high 16 kills after recording just seven in the set before. ETSU was able to get contributions from Caroline Dykes (Flower Mound, Texas), Coffman, and Esposito at the net as all three aided in the team’s two blocks in the set. Clemson was held to just 11 kills on .175 hitting. Forster continued her dominant weekend with seven kills on nine attempts with no errors this set.

Set 3 (Clemson, 25-19): Clemson fired out of the gates after ETSU took the first two points, going on an 8-1 run to take a sizable lead that they wouldn’t surrender. Abbey Thomas (Goldsboro, N.C.) posted two kills to get the Bucs within two, but some ETSU attack errors allowed Clemson to maintain that lead through the set. Clemson had their best attacking set with 14 kills on .357 hitting, while ETSU managed just 12 kills but eight errors. Neither team recorded an ace this set despite there being ten total in the match. Thomas and Josannah Vazquez (Mansfield, Texas) led the Bucs this set with three kills.

Set 4 (Clemson, 26-24): As tight of a set as we’ve seen all season with a total of 17 ties, neither team led by more than four. ETSU had the longest scoring run this set of four, backed by kills from Forster and Vazquez to take a minimal lead, but neither team’s lead lasted long. Both squads tied at every point above 20 with ETSU getting the first chance at set point after Esposito went back-to-back. Clemson’s Kaylee Martin responded with back-to-back kills of her own to set the Tigers with match point but an ETSU attack error halted their comeback. Both teams hit under .150 this set, but Clemson’s 14 kills over ETSU’s 12 made the difference. Esposito paced the Bucs with four kills this set, while Taylor Roberts (Sneads, Fla.) led the Bucs’ defense with six digs.

The Bucs start conference play this Friday in their home opener against Western Carolina. First serve is set for 6 p.m. The match is broadcasted on ESPN+.