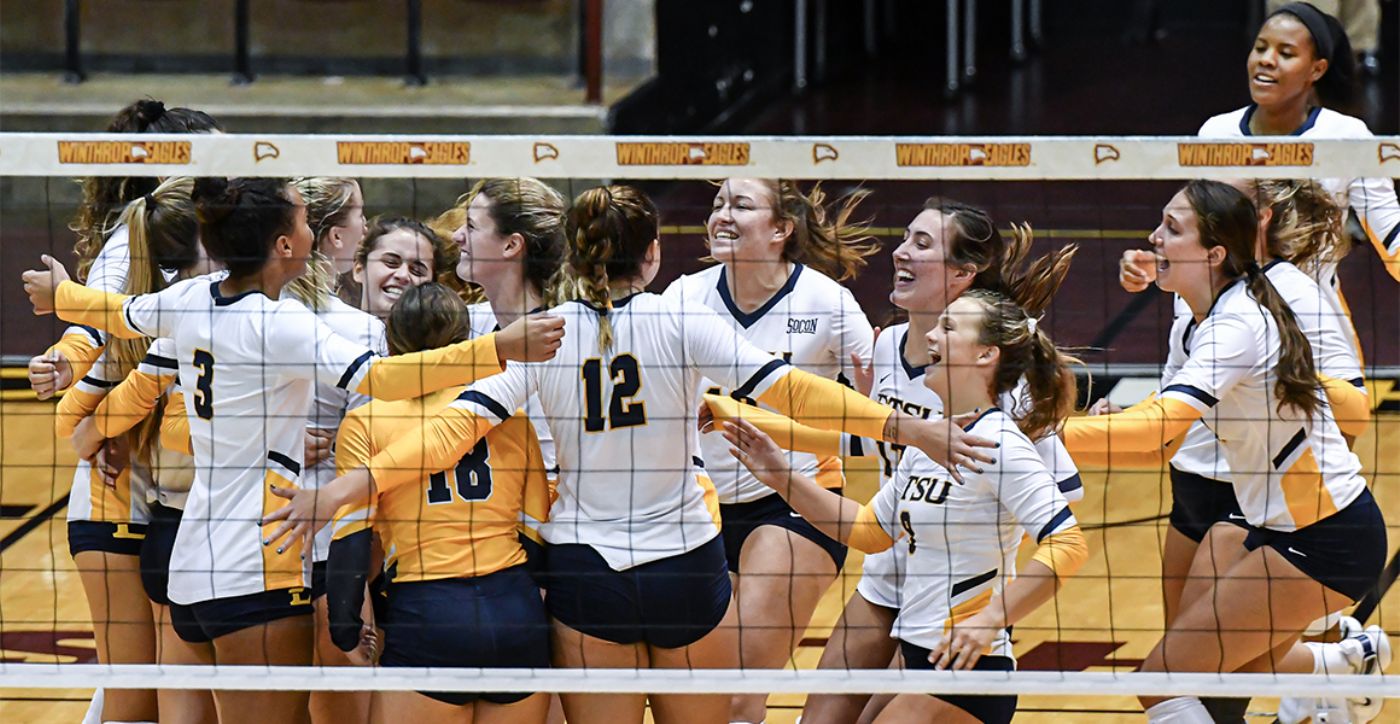 ETSU opens the conference slate with Western Carolina and UNCG

ETSU is coming off a strong weekend despite going 1-2 in the Big Orange Bash hosted by the Clemson Tigers. The first match of the weekend featured an outing against a Rutgers club that started hot, dropping that match 3-1. The Bucs responded with a sweep over UNC-Asheville just a few hours following before closing out the weekend with a four-set loss to Clemson. Jenna Forster (Maryville, Tenn.) was phenomenal all weekend, tallying 39 kills on a .385 hitting percentage with at least 12 kills in each of the three matches. Caroline Dykes (Flower Mound, Texas) also had a career weekend that resulted in the first weekly conference award (Setter of the Week) for the Bucs. Sara Esposito (Pianiga, Venezia, Italy) and Josannah Vazquez (Mansfield, Texas) had strong performances over the weekend. Esposito posted a .480 hitting percentage in the sweep over UNC-Asheville and Vazquez tallying 35 kills over the weekend to increase her team lead to 125. Taylor Roberts (Sneads, Fla.) has been an anchor on the defensive side, recording double-digit digs in every match for the Bucs thus far. As a team, the Bucs finished a great offensive weekend in which they hit a combined .238 over those three matches, including a .336 performance against UNC-Asheville.

The Catamounts finished with a 4-7 record similar to ETSU while facing solid programs like Houston and Alabama, where legendary ETSU head coach Lindsey Devine is now running the show. Western Carolina went 11-8 (11-5 SoCon) in the abbreviated spring season, winning both of their matches against the Bucs in Cullowhee.

The Catamounts are led by Karen Glover, who enters her 11th season at the helm of the WCU volleyball program. Glover has already produced a player of the week honoree in libero Destinee Dorsey, who is second in the conference in digs. Merry Gebel leads the team in kills with 154, as she also posted the most kills last season for the Catamounts. Gebel just recently joined the WCU 1,000 kills club and is 49 digs away from 1,000 career digs.

UNC-Greensboro is off to a nice start this season, already surpassing double-digit wins before hitting conference play at 11-2. The Spartans dropped their first loss in a five-set against Eastern Kentucky and responded with an eight-match win streak before just recently falling to Campbell for their second loss of the season.

The Spartans are led by Corey Carlin, who’s in his eighth season leading UNCG. Carlin was able to bring in graduate student Kayla White, who currently leads the conference in kills with 186. White was also recently named SoCon Offensive Player of the Week for her efforts in the Spartans’ tournament in Wilmington, N.C. Junior setter Gabriela McHugh also leads the conference in assists and assists/set en route to two Setter of the Week awards in the early stages of the season.