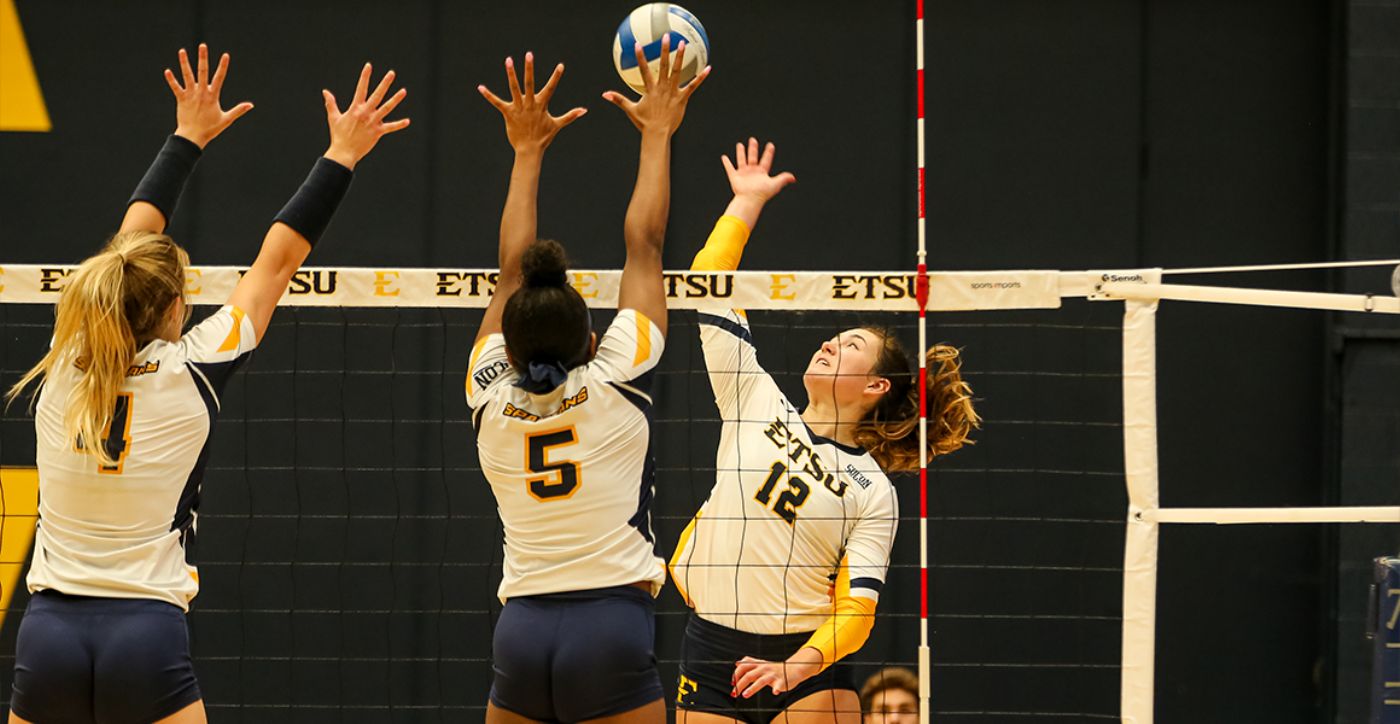 JOHNSON CITY, Tenn. (Sept. 25, 2021) – With two of the best statistical offenses in the conference, it was the UNCG Spartans that took the match 3-1 (21-25, 22-25, 25-21, 19-25) with six total players tallying double-digit kills. ETSU has now dropped their first two conference matches for the first time since they have joined the Southern Conference.

Set 1 (UNCG, 25-21): The Spartans got off to a small lead, but it was an 8-0 run in the middle of the set that gave UNCG a sizeable lead, although ETSU would make it less than five before the Spartans took the set on an ETSU attack error. Opposite last night, both teams hit above .200 in the set, but UNCG’s .385 hitting percentage showed why they atop the conference standings. Josannah Vazquez (Mansfield, Texas), Abbey Thomas (Goldsboro, N.C.), and Lundyn Coffman (Nolensville, Tenn.) each posted three kills in the set to lead the Bucs while Taylor Roberts (Sneads, Fla.) stayed consistent on the defensive end with six digs in the set. Both teams recorded two aces.

Set 2 (UNCG, 25-22): The closest set of the afternoon, the two squads tied at every point from 12 to 19. Sara Esposito (Pianiga, Venezia, Italy) and Chloe Dupuis (Poquoson, Va.) tallied clutch kills to make the match within one, but a Spartan ace sealed the set and put UNCG up two sets. Vazquez was on fire this set with seven kills, the most this set, on ten attempts with no errors. Those seven were part of 17 kills the Bucs posted, tied for most in a set this match. Both teams hit above .350 in the set, the best overall hitting set in the match. Thomas and Dykes combined for a clutch block in the early parts of the match to help keep the Bucs in it.

Set 3 (ETSU, 25-21): ETSU was the one to get off quick with kills from Esposito and two aces from Caroline Dykes (Flower Mound, Texas) that forced UNCG to call both of their timeouts before the Bucs got to 10. UNCG would tie the set, but two kills from Asia Mattress (Mauldin, S.C.) allowed ETSU to keep the lead and Dupuis would notch a kill to avoid the sweep. Esposito started and finished strong this set, as she posted a set-high six kills on .417 hitting. Esposito would also add an ace this set to bring her season total to a team-high 13. Roberts posted another six digs this set to reach the double-digit mark, extending that streak to all 13 matches. She finished the match with 16. Both Vazquez and Dykes reached double-digit digs in this set, giving them their fourth and seventh double-doubles, respectively. ETSU was able to hold UNCG to a .140 hitting percentage this set, their lowest in two conference matches.

Set 4 (UNCG, 25-19): The momentum built after ETSU took the previous set, but UNCG quickly turned the tables with an ace and service error from the Bucs. Esposito built on the previous set, tallying another five kills on 11 attempts to get her to double-digit since the Clemson match. She also tallied the only solo block of the match for the Bucs. Coffman and Dykes each tallied some late kills to help give ETSU some life, but aces from UNCG and kills from four different Spartans in the last six points barred any comeback from the Bucs. UNCG tallied a match-high 19 kills in the set en route to 64 in the match.

The Bucs go on the road a week from today in Greenville, S.C. to take on the Furman Paladins. First serve is set for 4 p.m.