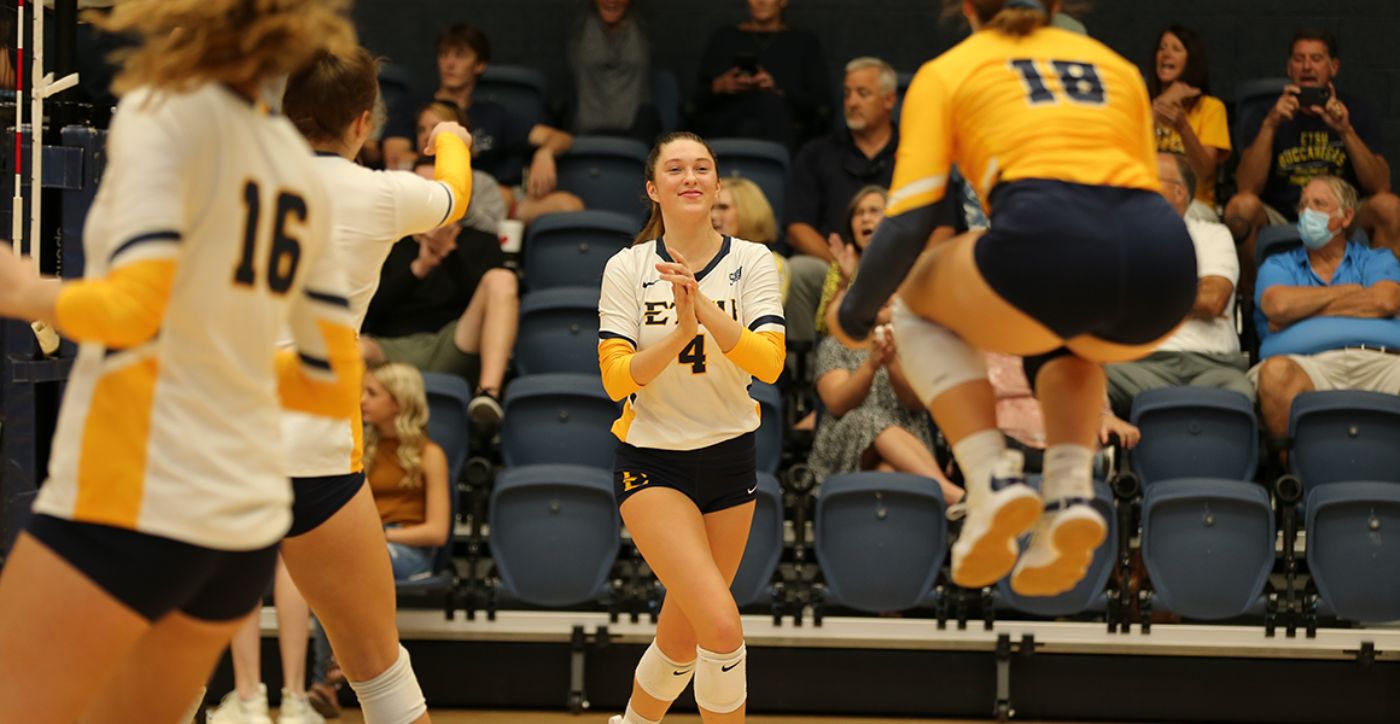 SPARTANBURG, S.C. (Sept. 27, 2021) – ETSU Volleyball’s freshman setter Caroline Dykes (Flower Mound, Texas) has been named the Southern Conference Setter of the Week for the second time in as many weeks, the league announced Monday afternoon.

After a weekend where she set a career-high in assists (43), she built off that to deliver another great performance to kick off conference play, where she set new career-highs in assists (51) and digs (17). Over the weekend, she tallied 85 assists and averaged 12.14 assists/set. She ranks second in the conference in assists/set among conference matches. Dykes also posted three aces over the weekend, two of which came in a crucial early rally in the UNCG match, increasing her season total to 10. The Texas native has posted 30+ assists in six straight matches going into this weekend, the longest since Arnold ended the 2019 season with eight.

With her 51 assists against UNCG, that was the first time an ETSU setter recorded 50+ assists since Emily Arnold posted 52 in the spring against The Citadel, who the Bucs face off this Sunday. Arnold was the last freshman setter to post as many assists in a match, doing so in the first round of the 2019 SoCon tournament against UNCG.

Dykes has also been delivering on the defensive end, ranking second on the team in digs (128). She has seven double-doubles on the season, which leads the team, and is tied for second in the conference with Chattanooga’s Sophia Bossong among setters. The most double-doubles anyone had in the 2019 season was Lauren Hatch with eight.

This is the second weekly award for ETSU, both of which have gone to Dykes as Setter of the Week. She is the only freshman thus far in the conference to receive a weekly award this season. Kaela Massey was the last ETSU player to win two or more player of the week awards in a season, doing it in 2019. The last ETSU player to win back-to-back player of the week awards was Marija Popovic in 2017 when she won two Defensive Player of the Week awards in late October. That was also the last time an ETSU freshman went back-to-back until Dykes accomplished that feat this past weekend.

The Bucs go on the road in conference play for the first time in the fall, facing Furman on Saturday in Greenville. First serve is set for 4 p.m. The match will be broadcasted on ESPN+.