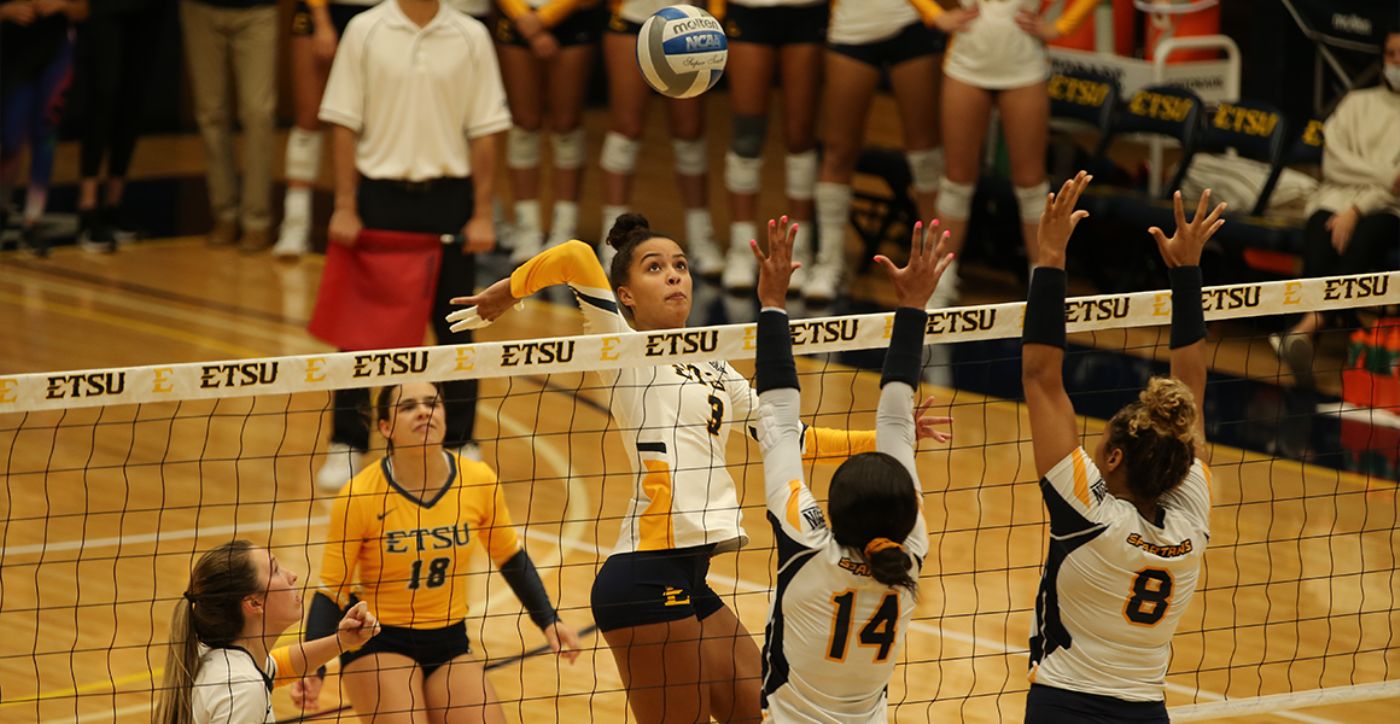 Bucs look for first conference win of the season

JOHNSON CITY, Tenn. (Oct. 1, 2021) – After a home weekend that didn’t go in the Bucs’ favor, ETSU sets their eyes on two more tough conference matches against Furman and The Citadel. The Bucs start 0-2 in conference play for the first time in over a decade, before they joined the Southern Conference. Furman currently has one conference win and just above .500, while The Citadel is 5-4 coming off a conference victory over Wofford after having a few non-conference matches get cancelled.

The Bucs start the season with as many losses as they had in the spring, falling in their first two conference matches against Western Carolina and UNCG to drop their record to 4-9. In the 3-1 loss against the Spartans, there was a bright spot with freshman setter Caroline Dykes (Flower Mound, Texas) tallying career highs in assists (51) and digs (17). Her performance, matched with the night before, was awarded with her second SoCon Setter of the Week award in as many weeks. She is the only ETSU player to win a weekly award while also being the only freshman in the conference to win a weekly award. Newcomers Josannah Vazquez (Mansfield, Texas) and Taylor Roberts (Sneads, Fla.) continue to lead the team in their respective positions, with Vazquez over the 150 kills mark and Roberts tallying 182. Roberts has also continued her streak of double-digit digs in every match, dating back to the season opener against Texas Tech. Sara Esposito (Pianiga, Venezia, Italy) and Jenna Forster (Maryville, Tenn.) round out the top-three performers in kills, with all of them surpassing 100 this early in the season. Within the conference, ETSU ranks second in assists/set (11.82) and kills/set (12.86). The team they trail is their most recent opponent in UNCG.

The Paladins were the first team to play a conference match this season, facing Wofford just over a week ago in Spartanburg and came victorious 3-2. Off to a 6-5 (1-0 SoCon) start, the Paladins also had a tough non-conference facing Wake Forest, South Florida, and Kennesaw State. This is the first time ETSU has visited the Paladins since opening the spring season in Greenville in January. ETSU won both of those matches, and are victorious in four straight matches at Alley Gymnasium.

The Paladins are led by Michelle Young, the all-time winningest coach in Furman volleyball history with nearly 375 wins in her career at Furman and has been their coach for the entire 21st century thus far. The five-time SoCon Coach of the Year leads a program that features Neci Harris (leads team in kills and blocks) and Sarah Turner (leads team in assists).

The Bulldogs are led by Dave Zenelock who enters his fourth season as the head of the volleyball program after five seasons at Tennessee Tech. The Citadel features All-Conference First Team member Sharlissa De Jesus, who leads the team in kills and is the school’s all-time leader in kills.