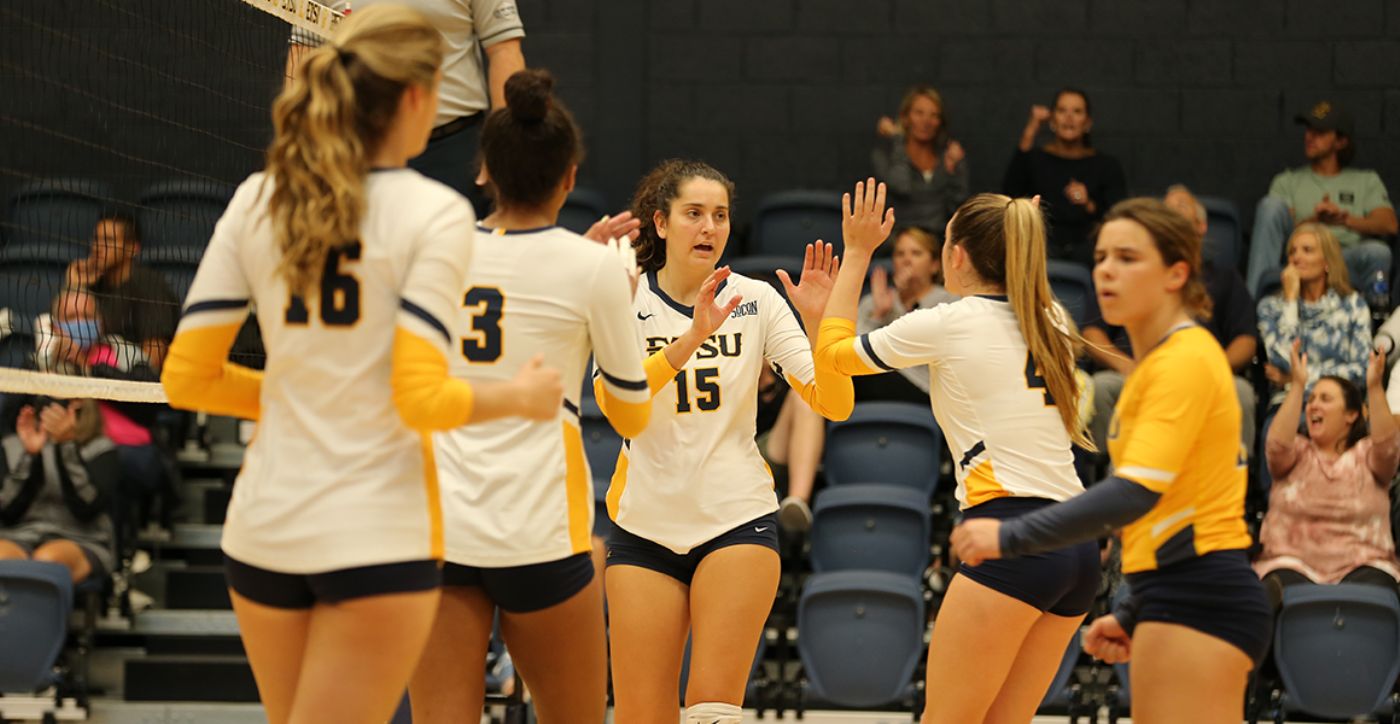 GREENVILLE, S.C. (Oct. 2, 2021) – The first conference road trip of the Bucs started with success, stealing a four-set (25-22, 16-25, 25-23, 25-13) win over Furman down in Greenville. This is the fifth straight road victory for ETSU against the Paladins and marks the Bucs’ eighth win against Furman over their last ten matches, including the postseason.

Set 1 (ETSU, 25-22): The Bucs were off to a small lead thanks to some Furman errors and kills from Abbey Thomas (Goldsboro, N.C.), Josannah Vazquez (Mansfield, Texas), and Sara Esposito (Pianiga, Venezia, Italy) to create an 8-4 lead, but the Paladins rallied off seven-straight, including three-straight aces to force a timeout. The Bucs would respond with four-straight to tie the set at 12, featuring back-to-back kills from Vazquez and a block with Lundyn Coffman (Nolensville, Tenn.). Despite Furman reaching 20 first, ETSU battled back behind the arm of Vazquez and blocks from Thomas and Jenna Forster (Maryville, Tenn.) to take the set. Vazquez finished the set leading the match with seven kills on ten attempts with no errors. Each team posted three blocks, but ETSU’s .231 hitting prevailed over Furman’s .053. Furman recorded four of their seven aces in the first set. Anna Mayer (Franklin, Tenn.) lead the way in assists with five.

Set 2 (FUR, 25-16): The Paladins lead the entire way through this set thanks to more aces and solid hitting. ETSU was able to cut the deficit to as small as two with a Furman service error and kill from Vazquez, but the Paladins rallied off points to extend their lead. Samantha Shafer (Franklin, Tenn.) had some quality action in the set, nabbing back-to-back kills in the middle of the set to give ETSU some momentum. It was quickly shut down by the Paladins after tallying another ace, their sixth at this point of the match. Shafer finished the set with four kills on seven attempts with no errors. Furman had the upper hand in the entire set, finishing with more kills, assists, digs, and hitting percentage. Both Forster and Thomas tallied two blocks apiece.

Set 3 (ETSU, 25-23): The tightest set of the match thus far, Coffman and Esposito got things going for the Bucs to start the set, but the Paladins tied it up at three shortly after. Furman fought back with a 6-2 run into the media timeout to lead by two, but some errors from the Paladins allowed ETSU to take the lead with kills from Thomas and Caroline Dykes (Flower Mound, Texas). The Bucs went up with four straight points to take a 22-19 lead, but the Paladins responded with four of their own to go up one. However, ETSU had a 2-1 set lead in mind as Vazquez, a Paladin error, and a block from Vazquez and Coffman made it happen. Neither team hit well statistically, as both finished under .120. Esposito paced the Bucs with four kills in the set, but Taylor Roberts (Sneads, Fla.) was all over the defensive end, tallying 10 digs in the set. Roberts finished with a season-high 23 digs.

Set 4 (ETSU, 25-13): It was all ETSU from the start, with Dykes setting the tone with the team’s first two aces of the match to take the first four points of the set. Furman was able to cut the lead to two with some kills, but Coffman, Vazquez, and Thomas put the Bucs in a great position early on and go on an 8-2 run to lead by 11. Esposito hit another level late in the set, posting three straight kills at one point to finish with six in the set and a team-high 15 overall. Esposito was also great on the blocking end, tallying two blocks with Coffman including the match-winner. ETSU’s defense held Furman to an even .000 hitting percentage, while the Bucs finished the set hitting .400. Shafer also had a clean set with three kills on four attempts with no errors. Dykes and Haley Sanders (Brentwood, Tenn.) each recorded enough digs to put them over the double-digit mark in the match.

The Bucs go further to the coast to face off against The Citadel in Charleston. First serve is set for 1 p.m. The match will be broadcasted on ESPN+.