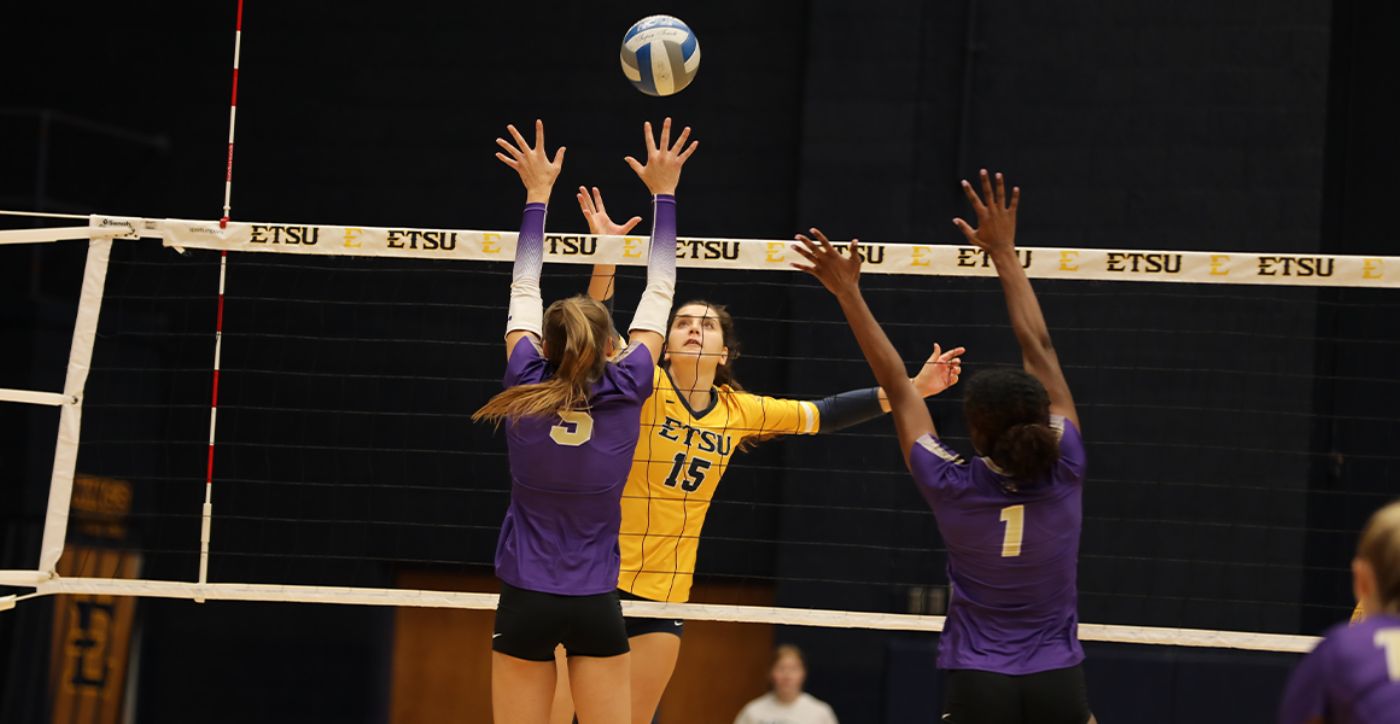 The senior finished with a career-high 22 kills on .383 hitting

CHARLESTON, S.C. (Oct. 3, 2021) – ETSU’s first conference road trip ended with a successful Sunday, topping The Citadel in four sets (25-20, 22-25, 27-25, 25-21). This is the first time this season that ETSU has won multiple games in a row. ETSU has now won 13 of 14 conference matches against the Bulldogs since 2014. Senior Sara Esposito (Pianiga, Venezia, Italy) finished with a career-high 22 kills, just a day after tallying a season-high 15 kills in the victory over Furman.

Set 1 (ETSU, 25-20): Neither team started well, but Esposito got her career night started on the first point of the match, going down the line with her first kill of the afternoon. The two squads stayed close throughout the set but got some help with aces from Lundyn Coffman (Nolensville, Tenn.) and Haley Sanders (Brentwood, Tenn.). This comes just a day after the Bucs didn’t record an ace until the fourth set. The Citadel got things tied up at 17 from an ETSU error but an 8-3 run to end halted any Bulldog comeback. ETSU got production from Jenna Forster (Maryville, Tenn.), Josannah Vazquez (Mansfield, Texas), and Abbey Thomas (Goldsboro, N.C.) to win the first set in back-to-back matches. The Bulldogs finished the set with more kills but also had more errors to lead the Bucs to take the set. Vazquez, Forster, Thomas, and Samantha Shafer (Franklin, Tenn.) each posted two kills.

Set 2 (CIT, 25-22): The Citadel took the early lead and got four blocks to help tie the set. The Bulldogs took a 5-1 run into ETSU’s first timeout of the set, but Forster and Esposito were able to tie the set at 17 off a Caroline Dykes (Flower Mound, Texas) ace. The Bucs then took the lead for just the second time this set, but four straight from the Bulldogs with a Sharlissa De Jesus kill and ace got the match tied. Esposito built on her career nigh this set with nine kills on twelve attempts, to reach double-digit in the match in just the second set. Dykes and Anna Mayer (Franklin, Tenn.) split setter duties as they combined for 13 assists this set. The Bucs hit just .089 this set.

Set 3 (ETSU, 27-25): ETSU took the lead early and throughout the main portion of this set, leading by as many as five after a Bulldog timeout, but some mistakes and timely kills by The Citadel got the set tied at 22. The Bulldogs would eventually get into set point with an error and kill, but ETSU fought back hard. Coffman grabbed a crucial kill to tie the set at 25, getting an open middle lane after the Bulldog defense anticipated a pass to Esposito. The Bucs would get some help on the next point with an attack that sailed across the backline to set up their set point. Esposito would seal the set with an out-of-system kill off the hands of the Bulldog blockers. She finished with another nine kills this set, bringing her total to 19 thus far. Dykes nearly had a double-double in this set alone with 10 assists and 7 digs but those numbers did propel her to her ninth double-double this season, the most of any Buc this season. ETSU’s offense was firing on all cylinders, tallying 20 kills with .312 hitting.

Set 4 (ETSU, 25-21): It was The Citadel that had the lead in the middle of the set, but five-straight with kills from Thomas, Forster, Vazquez, Coffman, and a Vazquez block got the set tied as the Bucs looked to take the match. ETSU ended the set on a 6-2 run with two kills from Coffman, an ace from Dykes, and the match-winning kill from Esposito. Esposito and Coffman also combined on a block, the team’s sixth of the match. With all the attention on Esposito, that allowed Thomas and Forster to be nearly flawless. The two combined for 12 kills on 15 attempts and no errors. ETSU’s offense continued to click with 18 kills on .314 hitting, propelling their overall hitting percentage in the match to .220.

The Bucs welcome SoCon preseason-favorite Samford Bulldogs to Brooks Gym on Thursday, Oct. 7th. First serve is set for 6:05 p.m. The match will be broadcasted on ESPN+.