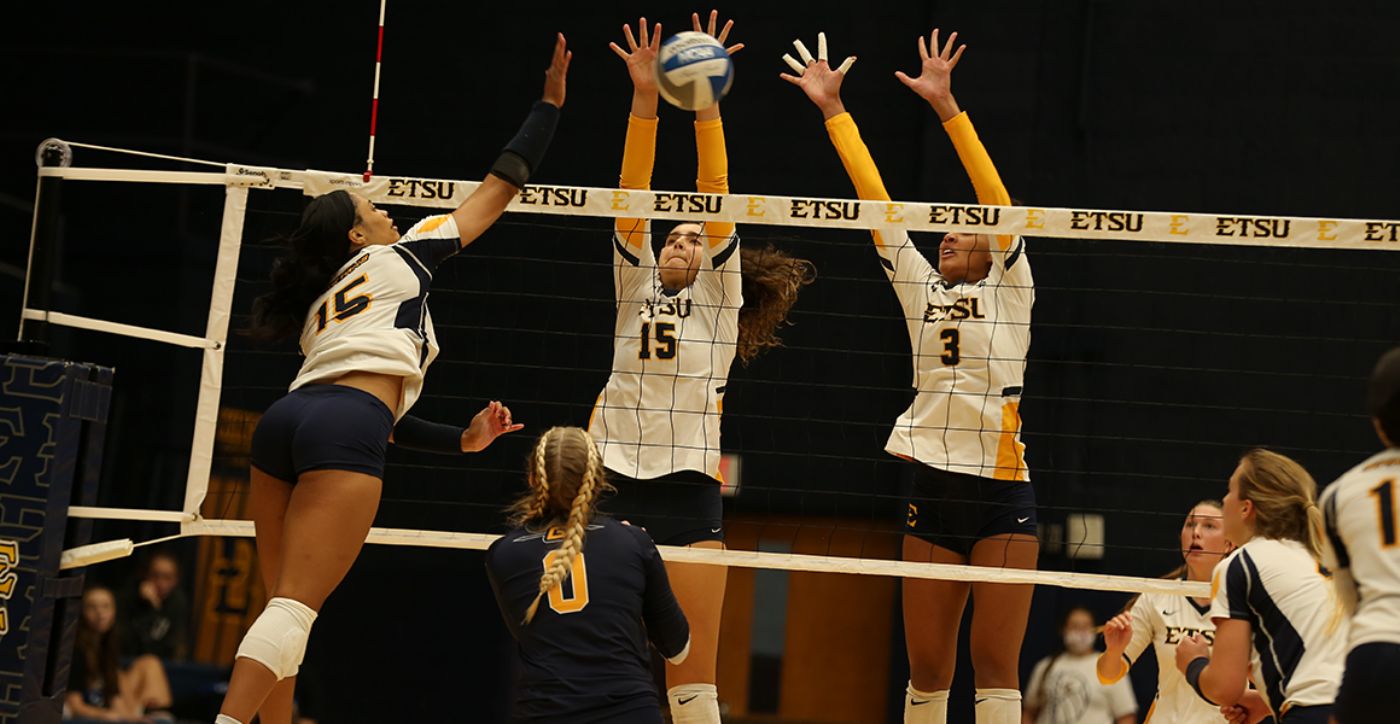 JOHNSON CITY, Tenn. (Oct. 6, 2021) – The Bucs return to Johnson City after a trip back to South Carolina where they knocked off Furman and The Citadel in four sets each. Senior Sara Esposito (Pianiga, Venezia, Italy) was on fire last weekend, with 4.63 kills/set in two matches en route to a SoCon Offensive Player of the Week award. The Bulldogs enter the weekend 3-12, but 2-2 in conference play. Mercer comes in near the top of the conference standings with a 7-8 record and 3-1 in the conference.

Only a couple of weeks removed from a non-conference schedule that had them at 4-7, the Bucs have turned the page as they head into conference play. After a home-opening weekend that didn’t go ETSU’s way, the Bucs responded against Furman and The Citadel to steal their first two conference wins of the season. Esposito led the team in kills in both matches with 15 against the Paladins and 22 against The Citadel, which is a career-high for the senior from Italy. Caroline Dykes (Flower Mound, Texas) continued her impressive freshman season, tallying two more double-doubles over the weekend with 28 assists and 10 digs against Furman and 31 assists and 17 digs against The Citadel, which tied her career-high from last weekend against UNCG. Anna Mayer (Franklin, Tenn.) started to share setter duties with Dykes as the sophomore transfer posted 21 assists in the win against The Citadel. Taylor Roberts (Sneads, Fla.) anchored the defense all weekend with back-to-back 23-dig performances, her season-high. ETSU recorded 62 kills and 83 digs as a team against the Bulldogs, both of which are the most this season. Through two weekends of conference play, ETSU’s offense has proved to be one of the top as they lead the conference in kills/set (14.00) and assists/set (13.20) in conference-only matches. The Bucs are also first in overall assists (198), second in kills (210) and third in hitting percentage (.204).

Tabbed as the SoCon preseason-favorite after going 15-4 (13-3 SoCon) and sweeping Mercer in the tournament championship, the Bulldogs had one of the toughest non-conference schedules in the conference after facing Clemson, LSU, Florida State, Ole Miss, and #20 Western Kentucky. Florida State and Ole Miss are receiving votes in the latest AVCA top-25 poll. The Bulldogs started the conference slate sweeping Wofford 3-0, but are coming off an 0-2 weekend against UNCG and Western Carolina.

The Bulldogs are led by Keylor Chan, who enters his sixth season leading the Bulldogs’ volleyball program. In his five seasons at the helm of the program, the Bulldogs have made the NCAA tournament four times and have double-digit conference wins in three straight seasons. The Bulldogs are led by reigning SoCon Freshman of the Year Kenya McQuirter (191 kills), Kayla Keshock (423 assists), and Emily Naubert (21 aces).

The Bears top the conference in the RPI rankings that were recently unveiled, with the Bucs coming in at second. A near .500 start for the Bears entering the weekend after topping UNCG in a five-set thriller that saw Rayanne de Oliveira receive SoCon Defensive Player of the Week as she recorded nine blocks in the win against the Spartans. The Bears also beat Western Carolina in four sets this past weekend to increase their conference record to 3-1.

The Bears are led by Derek Schroeder, who is the head coach of the beach volleyball team at Mercer. Schroeder begins his fourth season after becoming the all-time winningest coach in program history at Samford, boasting 169 wins in just eight seasons. Taylor Lynch (142 kills), Rayanne de Oliveira (45 blocks), and Jaida Howell (26 blocks) lead a squad that has the highest hitting percentage in the conference (.242) and the lowest opponent hitting percentage (.148).