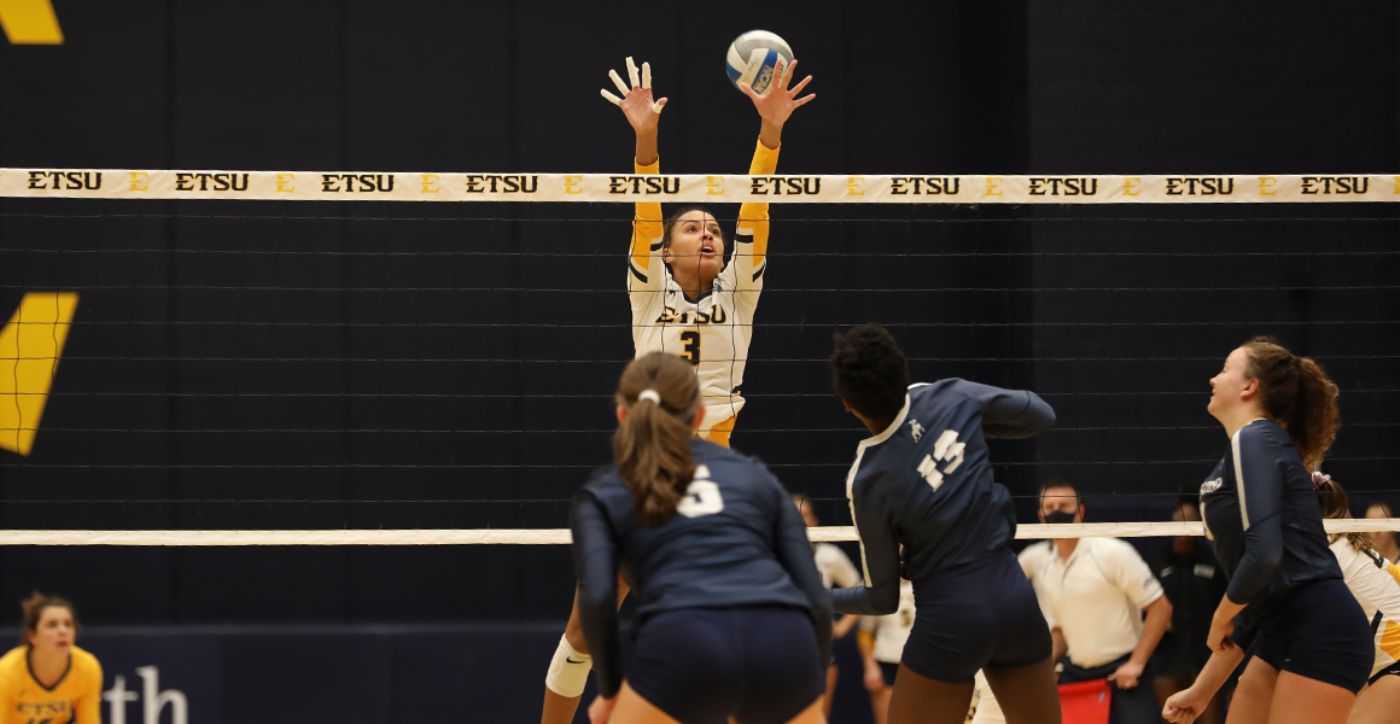 Bucs hit .323 as a team, topped Bulldogs in blocks and digs

JOHNSON CITY, Tenn. (Oct. 7, 2021) – A high-flying first set created the tone of the match that each team needed to be effective and determined. Despite the Bulldogs taking that set, the Bucs responded with determination, downing Samford in four sets (30-32, 26-24, 25-18, 25-23). This is just the second win over Samford in the last two seasons (including postseason), and the first win for the Bucs against the Bulldogs at home. Despite Samford recording 66 kills, their 29 errors and 14 service errors propelled the Bucs to the win.

Set 1 (SAM, 32-30): The set went back and forth all the way to the media timeout with the Bulldogs taking a 5-1 run into it with kills from Lauren Deaton and Kate Wonus. ETSU would respond with kills of their own from Jenna Forster (Maryville, Tenn.) and Abbey Thomas (Goldsboro, N.C.) and Samford would eventually lead 20-16, but the Bucs would get three-straight from some Bulldog errors and a kill from Lundyn Coffman (Nolensville, Tenn.) to cut the deficit to one. Samford got in position to take the set, but Thomas delivered two crucial kills back-to-back to force a timeout and bring the Bucs back into the set. ETSU was the one with set point for the first few points after 25, but two Samford kills ended the high-scoring first set. Both teams put up absurd numbers, with Samford posting 25 kills as a team while ETSU managed 17 on .444 hitting. Samford ended the set with four aces and eight service errors. Forster and Josannah Vazquez (Mansfield, Texas) lead the Bucs with five kills apiece. Forster achieved all five kills on five attempts. Anna Mayer (Franklin, Tenn.) recorded eight of the team’s 16 assists in the set. Samford’s Kayla Keshock managed 21 herself.

Set 2 (ETSU, 26-24): The theme of serve/receive continued this set as both teams posted multiple aces as Coffman and Sara Esposito (Pianiga, Venezia, Italy) contributed to the total. After both teams hit over .400 in the first set, both teams struggled to find the court as Samford took the early lead off some ETSU errors. The Bulldogs looked to have a strong lead going into the media timeout, but slowly and surely the Bucs fought back. ETSU took an 8-2 run late to take a 24-23 lead off a Samford error, their first of the set. A Coffman kill and another error from the Bulldogs sealed the second set for the Bucs. Neither team hit above .200, with ETSU holding Samford to a .108 hitting percentage with 10 errors. Thomas was a force defensively, nabbing three blocks, one solo and two assists.

Set 3 (ETSU, 25-18): This set stayed close through the early part, but ETSU’s defense stepped up big this set as Haley Sanders (Brentwood, Tenn.) was flying for digs. ETSU went on a 7-1 run with multiple attack errors from the Bulldogs to take a commanding lead this set as momentum was building and everything was favoring the Bucs. Samantha Shafer (Franklin, Tenn.) finished off the set with her third kill on four attempts to bring the Bucs up 2-1. Coffman and Esposito were everywhere around the net, combining for three blocks each as one set up set point. Both teams recorded 13 kills, but seven Samford errors compared to two from the Bucs proved to be the difference. A .423 hitting percentage was the second time ETSU had over .400 as a team in a set this match. Sanders, Vazquez, Dykes, and Taylor Roberts (Sneads, Fla.) each recorded three-plus digs as part of the team’s 16.

Set 4 (ETSU, 25-23): The Bulldogs took control early off some aces and kills from Kenya McQuirter, taking a six-point lead into the media timeout. Behind the serve of Coffman, ETSU rallied off nine straight with kills from Esposito and Thomas and five errors from the Bulldogs to swing the set and the match. Samford would rally an ace of their own and a kill to tie the set but kills from Vazquez and Esposito sealed the set and a crucial win over the preseason favorite. Despite Samford out-killing the Bucs in every set, ETSU had the upper hand in hitting percentage as their defense stood tall and their offense was clutch when it needed to be. Esposito finished the set with four kills, while Forster and Vazquez each contributed three. ETSU’s defense held the Bulldogs to another set under .200 as they finished the match hitting .230.

The Bucs bring in the Mercer Bears tomorrow for another match between top SoCon teams. First serve is set for 6:00 p.m. The match will be broadcasted on ESPN+.