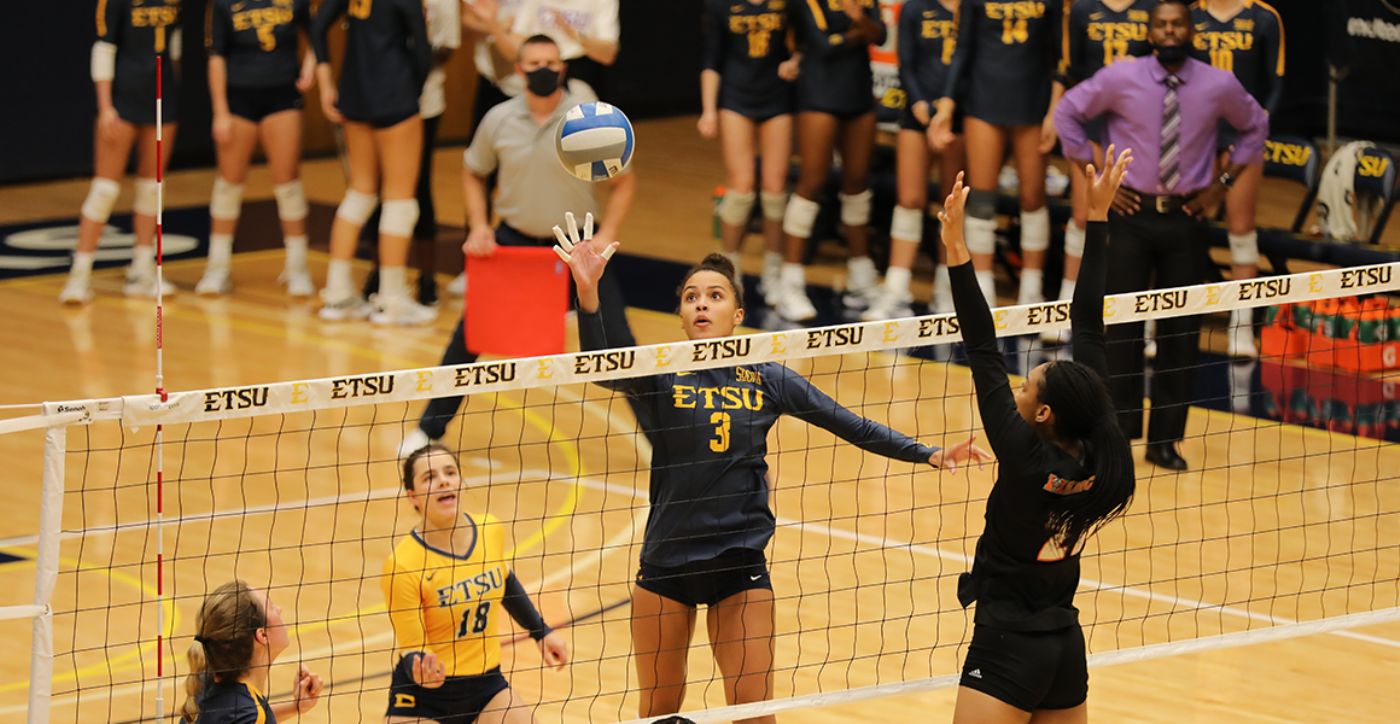 ETSU won both meetings in spring to end the season

JOHNSON CITY, Tenn. (Oct. 11, 2021) – The Bucs look to extend their nine-match win streak over the Mocs tomorrow night with ETSU’s three-match homestand coming to an end. Chattanooga enters the match 6-13 (2-4 SoCon) on the year after a split weekend where they beat Samford in five sets and were swept by Mercer. Chattanooga and Wofford, Saturday’s opponent, are the only two SoCon teams ETSU hasn’t faced since starting conference play three weeks ago.

The Bucs started to get into a groove after taking down Furman and the Citadel in four sets and it continued against preseason-favorite Samford, but their momentum came to a halt in Brooks Friday night as the Bears, who are tied for first in the conference standings, swept ETSU. The split weekend moves ETSU to 7-10 (3-3 SoCon) on the year, their first full season with double-digit losses since 2017 when they went 19-12. However, that team did sweep through the conference tournament en route to an automatic NCAA Tournament berth. ETSU has seen a few players really hit their stride lately, including senior Sara Esposito (Pianiga, Venezia, Italy). Going 3-1 in the last four matches, Esposito has 64 kills (16 kills per match), 4.27 kills/set on .305 hitting. Esposito has skyrocketed to just five kills behind Josannah Vazquez (Mansfield, Texas) for the team lead. Abbey Thomas (Goldsboro, N.C.) has also had a great start to the month with 26 kills on .364 hitting with 12 blocks. Thomas ranks sixth in hitting percentage in the conference in conference-only matches with .295. Two-time setter of the week Caroline Dykes (Flower Mound, Texas) continues to pace the Bucs offense in assists and aces, as she has 531 assists (9.00 per set) and 17 aces (leads the team). The squad’s offense continues to rank among the highest in the league in conference-only matches as they sit first in assists/set (12.64), second in kills/set (13.41), third in kills (295), and third in digs/set (17.32).

The Mocs start the season 6-13 (2-4 SoCon) with both of their conference wins coming in five sets against Samford and Furman. Chattanooga’s non-conference featured Memphis, Virginia Tech, and Troy. The Mocs are 2-2 over the last two weekends after losing to Mercer and The Citadel. Chattanooga went 6-12 (4-12 SoCon) in the abbreviated spring season as they dropped their last two matches against ETSU in Johnson City.

Chattanooga is led by Travis Filar, who enters his 11th season leading the Chattanooga volleyball program that won the 2015 Conference Championship. His 117-182 record is second all-time in Chattanooga history as his tenure is also the second-longest at UTC. The Mocs are led by Maia Rackel (230 kills), Sophia Bossong (563 assists), and Marcelle Baez-Carlo (75 blocks).