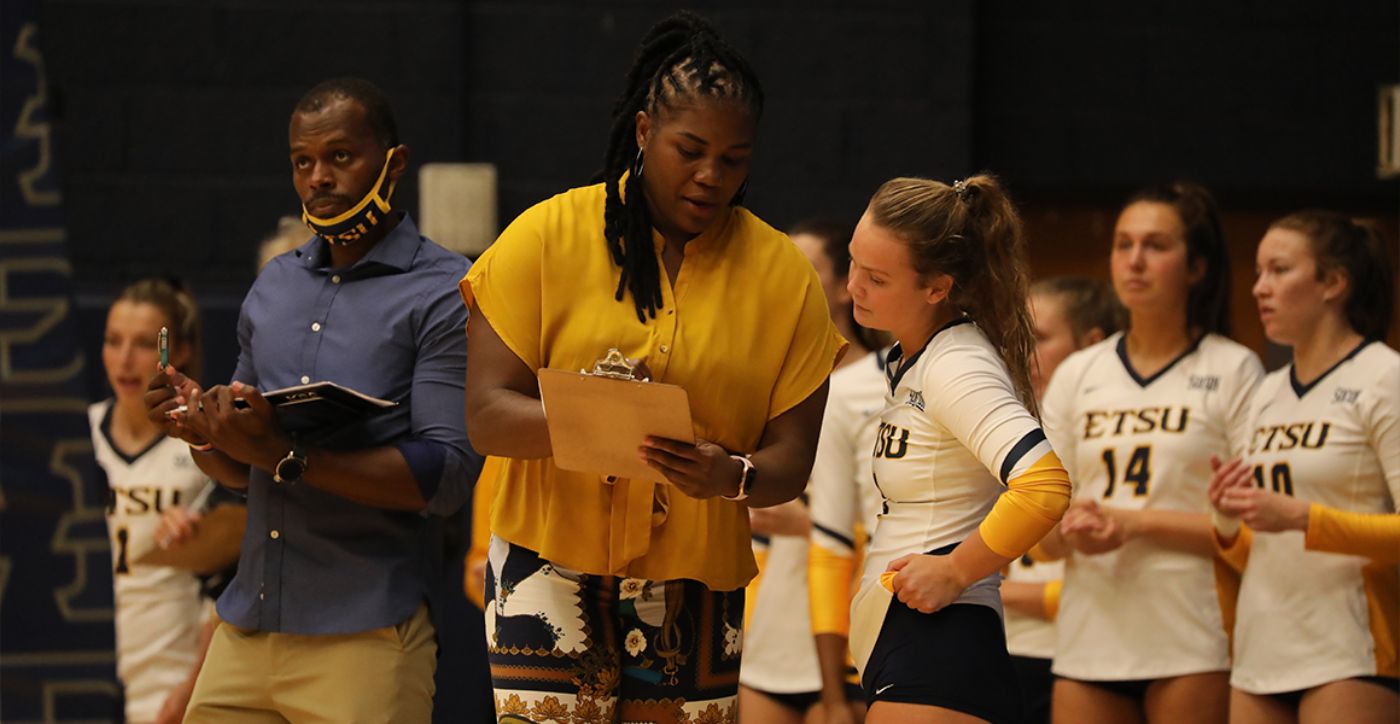 SPARTANBURG, S.C. (Oct. 16, 2021) – With a hot streak at hand, the Bucs were met with another high-powered offense as Wofford swept ETSU (21-25, 14-25, 11-25) for their 10th victory of their campaign. This marks the first road conference loss for ETSU this fall, and three straight losses in Spartanburg. Samantha Shafer (Franklin, Tenn.) led the Bucs with eight kills on .350 hitting.

Set 1 (WOF, 25-21): The Bucs were able to keep things close with kills from Sara Esposito (Pianiga, Venezia, Italy) and Lundyn Coffman (Nolensville, Tenn.) during the heart of the set Wofford then tallied a few blocks and kills to put some distance between them and the Bucs, but ETSU rallied four straight with two kills from Josannah Vazquez (Mansfield, Texas), one from Esposito and a block from Coffman got the set tied, but Wofford took the next four points and snag the first. ETSU put up 14 kills compared to Wofford’s 11. Caroline Dykes (Flower Mound, Texas) and Taylor Roberts (Sneads, Fla.) each added an ace in the set as they try and keep up with Esposito’s team lead. Vazquez paced the Bucs with four kills this set.

Set 2 (WOF, 25-14): The Terriers took the first four points of the set with an ace and a couple kills, and wouldn’t see that lead cease. ETSU cut Wofford’s lead to as small as two after an Esposito block at the 14-12 mark. Shafer and Coffman helped lead ETSU’s charge to cut the deficit, but Wofford’s offense led by Sarah Barham would limit any sort of comeback. Shafer finished with three kills in the set and Coffman added two herself. Wofford hit .324 with 14 kills this set. Wofford also tallied 17 digs compared to ETSU’s 13.

Set 3 (WOF, 25-11): ETSU was able to get their first lead of the match this set after a Dykes ace and a ball handling error from Wofford, but the Terriers took over fast. Wofford would tally another two blocks and aces to take a sizeable lead that they wouldn’t let go. Dykes and Shafer tallied back-to-back solo blocks in the middle of the set, but Wofford took an ace and a few kills to increase their lead. Wofford ended the set on an 8-2 run with another two blocks, holding ETSU’s offense this set to just four kills on -.148 hitting. Vazquez and Shafer recorded ETSU’s four kills this set, their lowest notching two in the second set of a four-set loss to Samford in the spring. Wofford tallied 12 kills on .375 hitting to put an exclamation point on the match.

ETSU starts the second half of conference play with a road trip out east to face Western Carolina on Friday, Oct. 22nd. First serve is scheduled for 5 p.m.