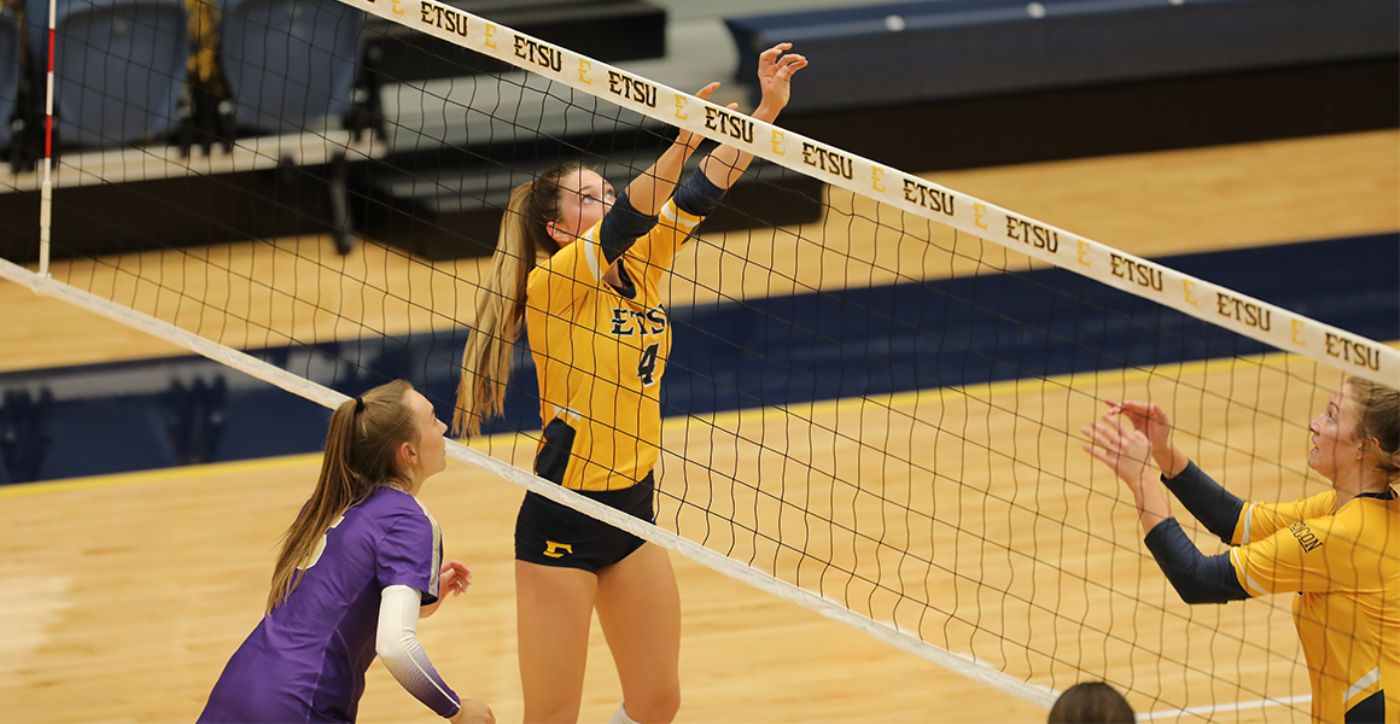 ETSU dropped matches to WCU and UNCG back in September

JOHNSON CITY, Tenn. (Oct. 21, 2021) – ETSU looks to turn the page in their conference season as the second half gets underway this weekend with the Bucs crossing the Appalachian Highlands into North Carolina to face Western Carolina and UNCG. This season is the first time that ETSU has lost to Western Carolina and UNCG at home in the same season since 2002.

After dropping their first two contests of the conference slate to the opponents on deck, ETSU found a rhythm on offense and took four of the next five matches to get back above .500 in conference play. However, ETSU was met with a balanced attack and defense from Wofford, dropping the match 3-0 to move to 8-11 (4-4 SoCon) on the year. After playing each conference team once, ETSU still ranks in the upper half of kills/set (12.75) and assists/set (11.75). Josannah Vazquez (Mansfield, Texas) and Sara Esposito (Pianiga, Venezia, Italy) are both in the thick of the top in kills/set in the conference with Vazquez holding 3.05 with Esposito right behind her at 3.02. Esposito has hit a different stride since starting conference play, boasting 3.50 kills/set through eight conference matches. Setter Caroline Dykes (Flower Mound, Texas) has done more than just set up her attackers, but she is tied for second in conference matches with 13 aces, just behind Samford’s Emily Naubert with 14. Dykes leads the team in aces with 20 on the season. The middle-blocker combination of Lundyn Coffman (Nolensville, Tenn.) and Abbey Thomas (Goldsboro, N.C.) have seen success during the start of conference play as well, with both of them recording 20+ blocks over those eight games. Coffman has enjoyed a career year, already with 11 solo blocks with eight-plus matches to go in the season. Thomas has benefitted from the success of others, as she has the highest hitting percentage on the team in conference matches with .303. As a team in eight conference matches, the Bucs rank third in assists/set (12.11), third in blocks/set (2.00), and third in aces/set (1.57).

The Catamounts have reeled in a 9-10 (5-3 SoCon) record going into the second half of conference play. Western Carolina is coming off a 1-1 weekend after sweeping The Citadel at home after dropping a four-set match to the Spartans. WCU’s Merry Gebel ranks fourth in the conference in kills/set with 3.65.

Western Carolina was victorious in the first meeting this season, taking the match in straight sets (23-25, 19-25, 28-30). Josannah Vazquez led the Bucs with 12 kills and four blocks, all block assists. Vazquez also recorded her third double-double of the season with 12 kills and 11 digs. Caroline Dykes posted a match-high 34 assists in the loss. Western Carolina’s Julia Gardon led the match with 13 kills.

The Spartans continue to have an impressive record, coming into the weekend at 17-4 (6-2 SoCon). Both of UNCG’s conference losses have come in five sets, dropping their first to Mercer and recently falling to The Citadel. UNCG’s Gabriela McHugh leads the conference in assists/set with 10.60, which puts her 31st in the nation. The Spartans defense also ranks seventh in the country in total attacks with 3,070.

ETSU was able to avoid the sweep by UNCG, falling in four to the second-place Spartans (21-25, 22-25, 25-21, 19-25). The match portrayed the potential for both of these high-powered offenses, as both teams hit above .250 and tallied more than 60 kills in the four-set contest. Caroline Dykes posted a career-high 51 assists and 17 digs, which was good for her seventh double-double of the season. UNCG’s Kayla White led the match with 17 kills.