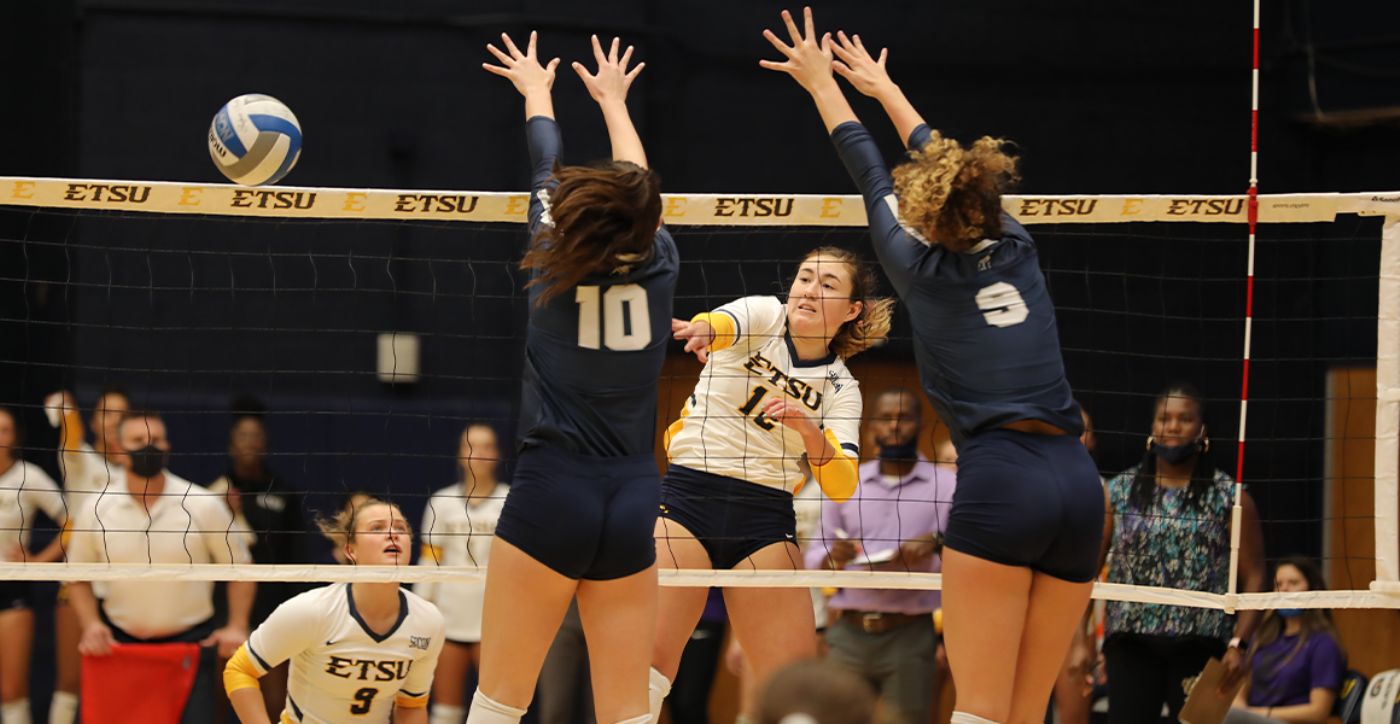 CULLOWHEE, N.C. (Oct. 22, 2021) – The ETSU Bucs started the second half of the season with a bang, putting down Western Carolina in four sets (25-19, 17-25, 25-22, 27-25). With ETSU at match point, the Catamounts rallied off five consecutive points to set up their set point and force a fifth. ETSU’s Lundyn Coffman (Nolensville, Tenn.) and Sara Esposito (Pianiga, Venezia, Italy) combined for a block while both notching a kill to halt WCU’s comeback efforts.

Set 1 (ETSU, 25-19): Josannah Vazquez (Mansfield, Texas) started on fire from the start, taking three kills in ETSU’s first ten points. Esposito and Coffman enjoyed productive sets as well, establishing offense from all parts of the net, making it easy for Caroline Dykes (Flower Mound, Texas) to spread the ball. Dykes finished the first set with 12 assists and a match-high five digs. Neither team had any large scoring runs except for four-consecutive from the Bucs to start the match. ETSU maintained at least a five-point lead after crossing the 20-point mark and finished the set off with a kill from Esposito and an ace from Coffman. ETSU’s offense finished with 15 kills on .344 hitting. Neither team recorded a block in the first set.

Set 2 (WCU, 25-17): It was Western Carolina that hit the ground running to start the set, giving ETSU their only lead in the set at the 5-4 mark. A 6-0 scoring run forced ETSU to take their first timeout of the match early. The Bucs would get four of those points back thanks to a kill from Samantha Shafer (Franklin, Tenn.) and a slew of Catamount errors, but WCU found their rhythm right after and held their lead to the end. Four different ETSU players notched two kills in the set: Coffman, Esposito, Vazquez, and Asia Mattress (Mauldin, S.C.). The Bucs were held to just ten kills on .121 hitting, compared to WCU’s 14 kills on .333 hitting. The Catamounts also posted four aces en route to tying the set.

Set 3 (ETSU, 25-22): The Catamounts jumped out early and fast, taking a commanding 7-2 lead thanks to some aces and kills from WCU’s Makenzie White. Mattress was able to stop the momentum from WCU, and her force was felt the rest of the set. The middle blocker would record another three kills to help propel ETSU back into their first lead at the 15-14 mark. The teams continued to trade points until back-to-back WCU attack errors gave the Bucs a two-point lead at 22-20. Esposito and Shafer would tag team a couple of kills to put ETSU in set point. Shafer would finish it with a kill off the tips of the block and the outstretched arms of Catamount defenders. Mattress finished with a perfect six kills on six attempts while adding a block assist to her stat line. Dykes nearly had a double-double in the set alone, notching 14 assists and nine digs. ETSU’s offense poured out 18 kills on .317 hitting while holding WCU to just 12 kills.

Set 4 (ETSU, 27-25): Both teams started out the set strong, trading points back and forth until Esposito sent ETSU ahead into the media timeout on her fourth kill of the set. The Bucs won the race to 20 on three-straight kills from Vazquez, forcing the Catamounts to burn one of their timeouts. ETSU would put themselves in match point with kills from Esposito and Coffman, but Western Carolina wouldn’t go away that easily. The Catamounts found a way to muster up five straight points and put themselves at set point and force a fifth set. Esposito and Coffman had other plans, as both notched a kill and combined for a block to halt WCU’s comeback. Vazquez finished the match strong, tallying nine kills on a whopping 24 attempts in the set. Esposito added seven to her match total of 15. The two combined for 16 of ETSU’s 21 kills in the set. Taylor Roberts (Sneads, Fla.) was flying across the floor, tallying nine digs in the set to put up a team-high 21. Both Dykes and Sydney Cherney (Knoxville, Tenn.) posted five digs in the set. Dykes would finish with a career-high 20 digs and Cherney would end the night with nine.

ETSU continues through North Carolina to face UNCG. First serve is scheduled for 5 p.m. The match is scheduled to be broadcasted on ESPN+.