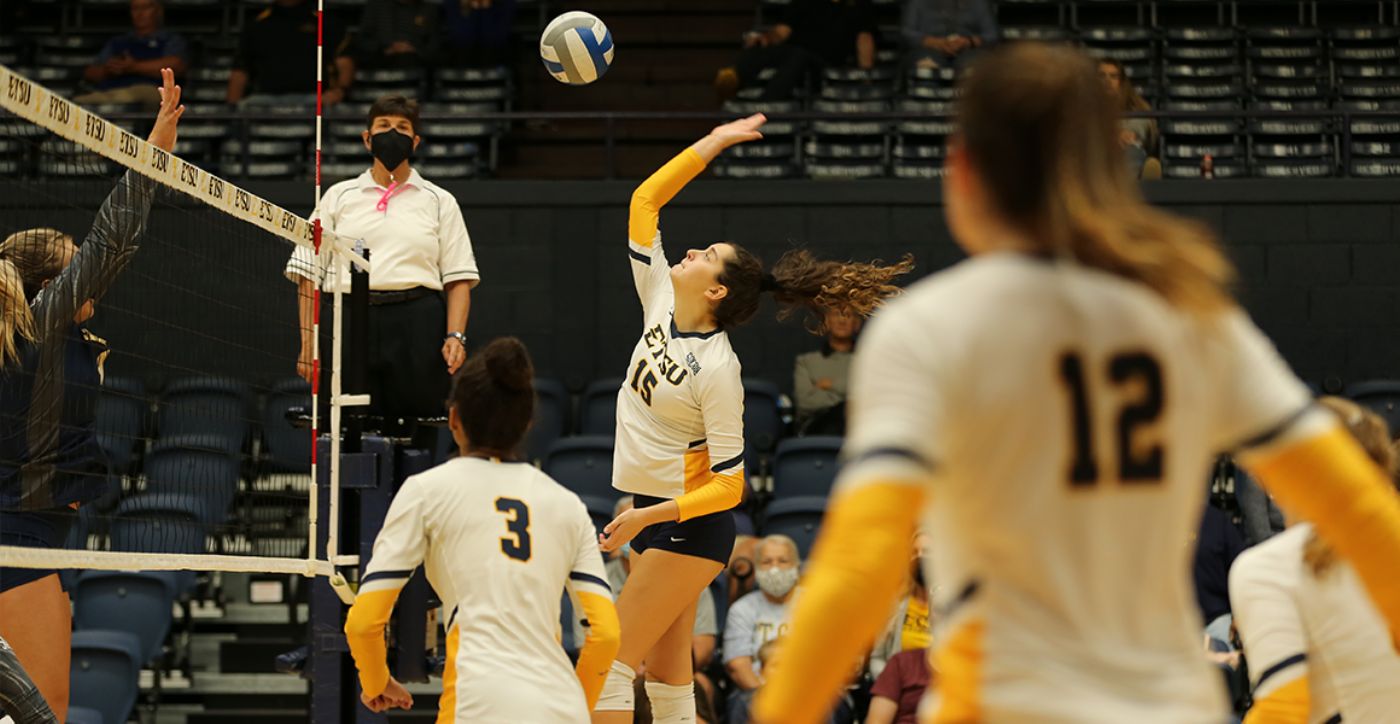 ETSU won both contests in four sets in early October

JOHNSON CITY, Tenn. (Oct. 28, 2021) – Coming off a tough loss against UNCG, ETSU aims to come back to Brooks Gym and welcome Furman and The Citadel in hopes to get back in the thick of the conference standings. The Bucs got their first two conference wins of the season against these two opponents in the first weekend of October down in South Carolina.

Sitting right in the middle of the standings, the Bucs did what they could do take a split weekend against Western Carolina and UNCG to come back home for two of their last three home matches. After a complete-team win against Western Carolina in four sets, momentum came to a halt against the SoCon leading Spartans, falling in three and losing the season series to UNCG for the first time since 2002. The Bucs (9-12, 5-5 SoCon) still have a chance to make some noise happen at the end of the season, with victories over four of their last six opponents (Furman, The Citadel, Samford, Chattanooga) before entering the conference tournament down in Birmingham, Ala. As we’ve seen all season, the offense runs through Josannah Vazquez (Mansfield, Texas) and Sara Esposito (Pianiga, Venezia, Italy), who both still rank in the top-10 in the conference in kills/set. Both have over 100 kills in conference play alone, with Esposito tallying 130 with 3.71 kills/set, with Vazquez coming just behind her with 107 on 3.06 kills/set. Caroline Dykes (Flower Mound, Texas) has consistently stayed as ETSU’s top setter, with Anna Mayer (Franklin, Tenn.) getting some action during the heart of conference play. Dykes leads the team with 648 aces and 22 aces, 15 of which have come in ten conference matches. Dykes, who has also seen a great amount of attention on defense, is second in digs (225) and digs/set (3.13) behind libero Taylor Roberts (Sneads, Fla.), who is sixth in the conference in the latter category (4.28). Along with Dykes and Roberts on the defensive end, Lundyn Coffman (Nolensville, Tenn.) has enjoyed a career season leading the team with 11 solo blocks and 48 block assists, with the former statistic being a career-high in a season with at least seven matches left to play. After a weekend of firepower from the Bucs, the crew still ranks second in team kills/set (12.94) and assists/set (11.99), both of which are behind UNCG.

The Paladins come into the season with just two conference wins yet both have been against the Wofford Terriers, who stand just above the Bucs in the conference standings as they eye to keep up with Mercer and UNCG. Speaking of, the Paladins are coming off a sweep of Wofford at home. Furman takes a quick stop at Chattanooga before coming to Brooks Gym tomorrow.

The Bucs got their first conference win of the season in the first meeting this season, taking the match in four sets (25-22, 16-25, 25-23, 25-13). Despite giving up seven aces and only recording two, Esposito’s 15 kills and Vazquez’s 12 kills were enough to push the Bucs past. Abbey Thomas (Goldsboro, N.C.) and Samantha Shafer (Franklin, Tenn.) enjoyed nice nights with Thomas hitting .455 with six kills and Shafer added eight kills on .350 hitting.

The Bulldogs have found themselves in the middle of the conference standings with the Bucs, coming into the weekend with the same record as ETSU. Led by Sharlissa De Jesus, who leads the conference with 4.40 kills/set, The Citadel is coming off a split weekend after downing Samford in four sets but falling to Mercer in three. The Bulldogs just had a midweek match against Wofford, falling in that match in four sets.

Historically, ETSU has always had The Citadel’s number. The Citadel got their first-ever win against the Bucs last spring, and ETSU wasn’t going to make it two in a row. The Bucs got better as the match progressed, winning the match in four sets (25-20, 22-25, 27-25, 25-21). Esposito enjoyed a career night with 22 kills, only the second time in her career that she posted 20+ kills. Fitting enough, both of those times were against The Citadel. Esposito earned SoCon Offensive Player of the Week after her weekend efforts.