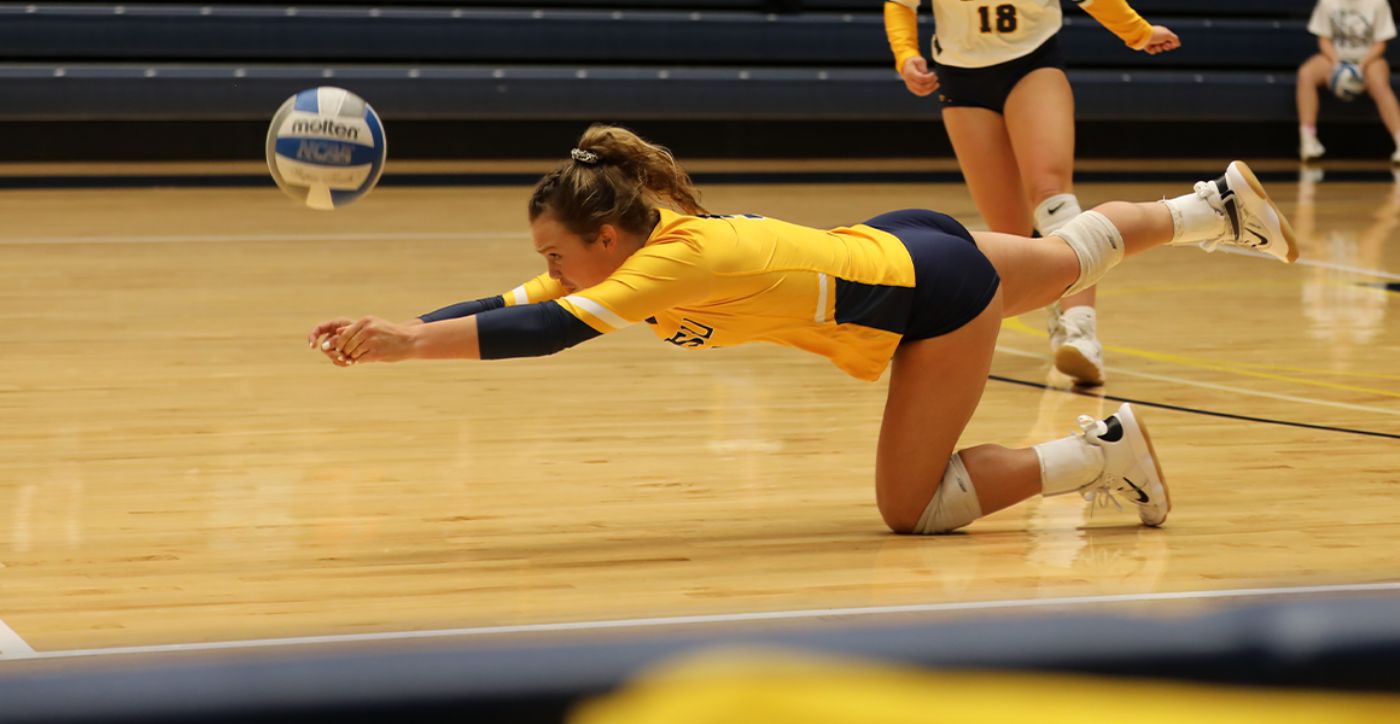 JOHNSON CITY, Tenn. (Oct. 30, 2021) – A weekend where ETSU needed two wins to stay in competition with the rest of the conference, the Bucs found a way through serving and flying around on defense to stay competitive and ride high energy. The Bucs, who only had more team aces and digs than The Citadel, did just that en route to their first five-set match and win of the season (25-21, 18-25, 15-25, 25-21, 15-9). As she’s done throughout her career against the Bulldogs, Sara Esposito (Pianiga, Venezia, Italy) led the team with 19 kills, totaling 41 kills in two matches against them this season.

Set 1 (ETSU, 25-21): Both teams got off to quick starts with ETSU getting offense from Josannah Vazquez (Mansfield, Texas) and Lundyn Coffman (Nolensville, Tenn.) to keep it close early. Esposito stole the show right after, serving during ETSU’s 11-point streak with four aces and two kills from Abbey Thomas (Goldsboro, N.C.). The double-digit lead was slowly taken away by the Bulldogs from Sharlissa de Jesus and Ali Ruffin but kills from Esposito, Thomas, and Samantha Shafer (Franklin, Tenn.) sealed the first set in favor of the Bucs. ETSU rallied off 16 kills, half of which came from Vazquez and Esposito, on .300 hitting. Caroline Dykes (Flower Mound, Texas) picked up right where she left off, dishing out 15 assists to five different attackers. Ruffin and de Jesus each posted five kills for The Citadel. The Bucs posted 21 digs in the first set, six coming from Vazquez and another six from Taylor Roberts (Sneads, Fla.).

Set 2 (CIT, 25-18): A block from Coffman started the set for ETSU, but both teams stayed close trading service errors and kills. Coffman put up back-to-back to tie the match at ten, but The Citadel went on an 8-3 run to put distance between themselves and the Bucs. ETSU was able to get some kills from Vazquez and Esposito, but not enough to go up two sets. Esposito continued her offensive afternoon with five kills in the second set as Vazquez tallied three. The Citadel’s offense found their rhythm, putting up 17 kills on .400 hitting, with de Jesus leading the way. Coffman’s block at the beginning of the set was the lone block for ETSU in the set.

Set 3 (CIT, 25-15): The Bulldogs got off to a quick start, making work of timely offense and aces to take a lead they wouldn’t surrender. ETSU’s offense continued through Esposito, tallying three more kills to increase her match total to 12. Those three were part of ETSU’s six kills in the set, the lowest amount until the fifth set. The Citadel didn’t fare that well on offense either, but still produced 13 kills to take what seemed like a commanding 2-1 set lead. In their previous meeting earlier this month, the Bulldogs only took set two.

Set 4 (ETSU, 25-21): In a set that needed momentum to change quickly, the Bucs turned their offense to Esposito, and she delivered. Putting up three kills and an ace in the Bucs’ first seven points, forcing The Citadel to take a timeout early. Thomas and Chloe Dupuis (Poquoson, Va.) benefitted from all the defensive attention to Esposito, as both posted a pair of kills. The back and forth battle between Esposito and de Jesus was the center of the set as the two dueled it out through the middle of the set to keep things interesting. Esposito got the last say, ending the set with her seventh kill of the set. ETSU found their offensive rhythm, putting up 17 kills on .229 hitting while holding The Citadel to .149 hitting. Dykes was impressive again on the defensive side, putting up eight digs along with 14 assists. Despite putting up six digs, Haley Sanders (Brentwood, Tenn.) ignited a spark in the Bucs defense, flying for digs and allowing ETSU to get in a better chance to win. Her six were part of ETSU’s 27 digs as a team this set alone.

Set 5 (ETSU, 15-9): The first time ETSU went into the fifth set this season, it couldn’t have started any better. Riding behind four aces, three of which coming from Coffman, the Bucs took a commanding 10-2 lead and momentum had completely switched. The Citadel still had discipline and fight in them, cutting the lead to five on kills from Ruffin, but Vazquez and Jenna Forster (Maryville, Tenn.) ended the night in favor of ETSU. Both teams recorded five kills, but ETSU’s three blocks and four aces paved the way to victory.

The Bucs hit the road for two impactful matches, with the first coming against the Samford Bulldogs. That match is scheduled for November 5th at 8 p.m. EST.