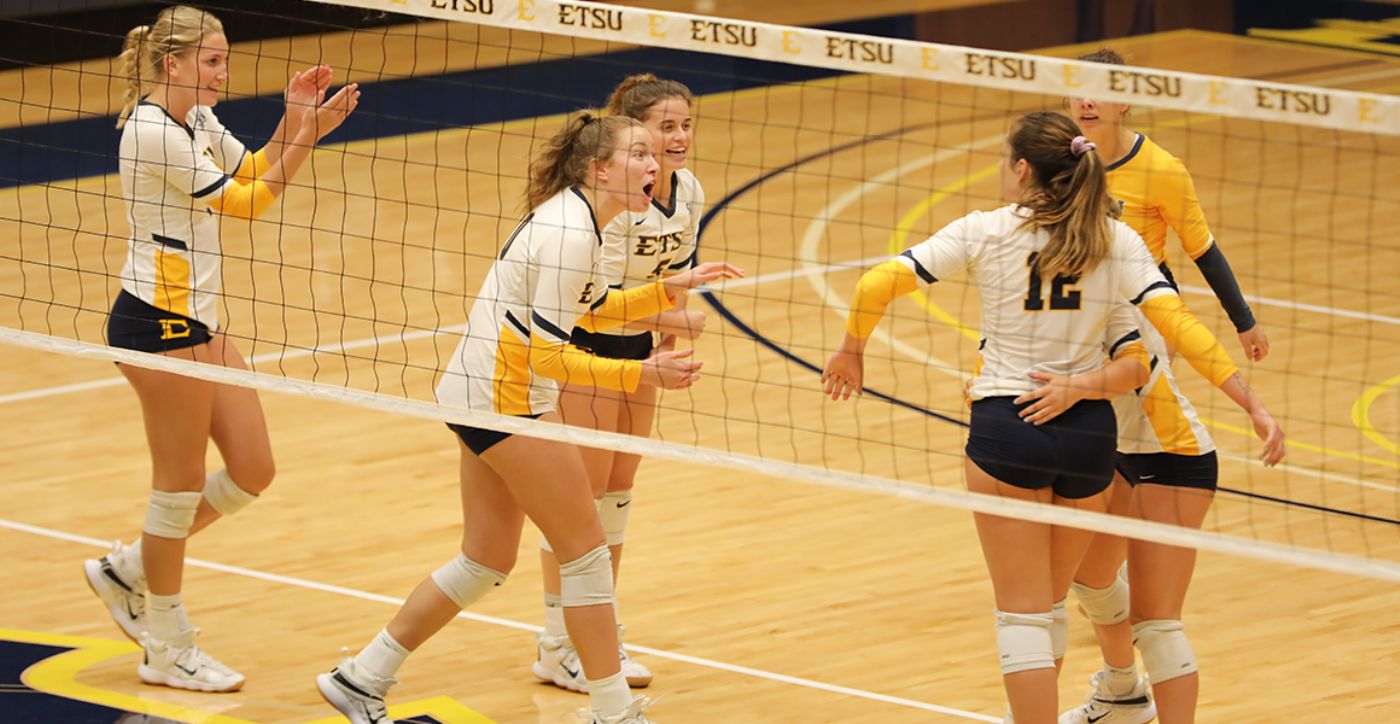 Set 1 (ETSU, 25-23): Samford looked like they were in control, taking a commanding 17-11 lead in the middle of the set behind blocks and their dynamic offense, but that didn’t stop ETSU from fighting back. Vazquez and Samantha Shafer (Franklin, Tenn.) got some points to cut their lead while Sara Esposito (Pianiga, Venezia, Italy) and Lundyn Coffman (Nolensville, Tenn.) each added a few kills of their own, and suddenly ETSU was down by one. Shafer and Abbey Thomas (Goldsboro, N.C.) came up with two huge blocks late in the set to not only tie the set but take the set point. The Bucs ended the set on an 11-3 run and Shafer accounted for all three of the final points for ETSU. After a slow start, ETSU still posted 17 kills, six of which came from Vazquez. Caroline Dykes (Flower Mound, Texas) dished the ball out efficiently, tallying 14 assists. The Bucs hit .324 as a team this set, holding Samford to .152.

Set 2 (SAM, 25-21): The story of Samford leading early continued, leading by the same score as the first set but a different story was written. Esposito and Vazquez continued to provide offensive support for the Bucs, but it was Samford’s defense that showed up this set. The Bulldogs tallied five blocks this set, only one of which was a solo block. ETSU was able to rally again to make it a one-score set at 22-21, but Samford put the Bucs away with two kills and an ETSU error. Esposito led the Bucs with five kills on .231 hitting. Samford’s defense held ETSU to hitting .062 as a team. Both Esposito and Vazquez reached double-digit kills this set.

Set 3 (SAM, 25-20): A set that started closer than the previous two, ETSU took a small lead in the middle of the set backed by kills from Esposito and Chloe Dupuis (Poquoson, Va.). The Bulldogs responded quickly, taking an 8-0 run in the middle of the set to put Samford up big. Jenna Forster (Maryville, Tenn.) added two quick kills off the bench after ETSU’s timeout to provide a spark for ETSU, but it was to no avail. The two squads traded the last few points before Samford took a 2-1 lead. Vazquez tallied another six kills this set, half of ETSU’s team total this set. The Bucs hit under .100 for the second consecutive set as Samford put up four more blocks, increasing their team total to 12.

Set 4 (SAM, 26-24): On Saturday night, the Bucs overcame a 2-1 deficit against The Citadel, and it looked like the Bucs were going to do that for the second consecutive match. The two teams went back and forth to start the set, as Haley Sanders (Brentwood, Tenn.) and Asia Mattress (Mauldin, S.C.) got in the offensive action. Samford would snag a few kills and take the small lead themselves, but the Bucs quickly responded with a couple of aces from Coffman and Taylor Roberts (Sneads, Fla.). Coffman, Roberts, and Sanders combined for four of the team’s five aces this set. Kills from Mattress and Shafer tied the match at 22, and the Bucs got the first chance at set point on back-to-back kills from Vazquez. Samford’s offense was too much, taking three straight kills to end the set and the match. Samford put up 17 kills this set compared to ETSU’s 11.

The Bucs continue on the road for another crucial match, facing the conference-leading Mercer Bears tomorrow. First serve is scheduled for 3 p.m.