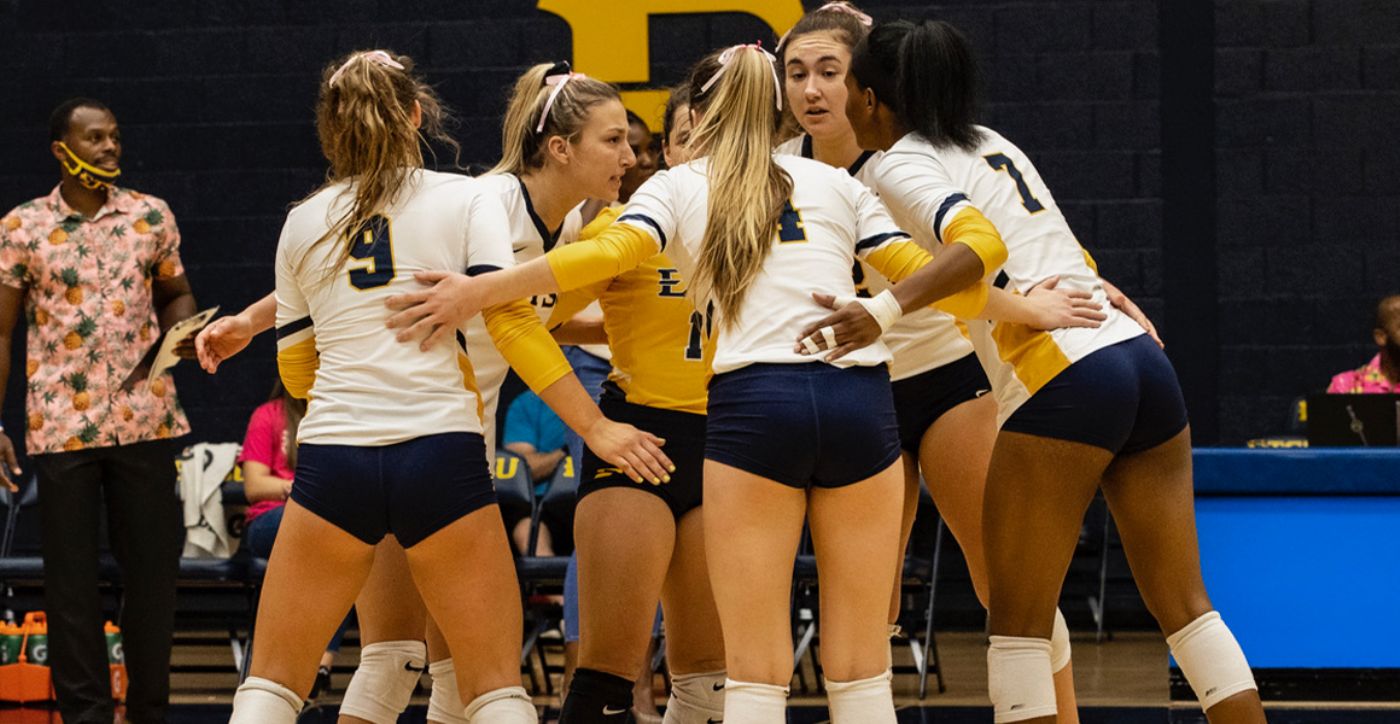 MACON, Ga. (Nov. 6, 2021) – Looking for revenge from their loss earlier this season, the Bucs couldn’t keep hold with the conference-leading Mercer Bears falling in straight sets (21-25, 16-25, 23-25). The Bucs led just once the entire match, doing so early in the third set. Mercer has won the last four matches, dating back to the start of the spring 2021 season.

Set 1 (MER, 25-21): The Bears got off to a hot start, taking an 8-3 lead before the Bucs were able to scratch away with a kill from Samantha Shafer (Franklin, Tenn.), a block from Asia Mattress (Mauldin, S.C.) and Josannah Vazquez (Mansfield, Texas), and some Mercer errors to tie the set at nine. Jenna Forster (Maryville, Tenn.) would get involved, notching herself a couple of kills before Mercer’s offense started to take control of the set. Vazquez, Sara Esposito (Pianiga, Venezia, Italy) and Abbey Thomas (Goldsboro, N.C.) each added a couple of kills towards the end of the set, but it was Mercer’s offense that stole the first set. Vazquez led the team with three kills while four separate Bucs posted two (Shafer, Thomas, Mattress, and Forster). Both teams recorded three blocks and two aces, but three extra attack errors from ETSU proved to be the difference.

Set 2 (MER, 25-16): A hot start was in play again for the Bears, scoring the first nine points of the set before a kill from Thomas put ETSU on the board. The Bears created their first double-digit lead off their second ace of the set, but kills from Forster and Vazquez didn’t allow the Bears to keep their sizeable lead. The smallest lead Mercer had was a six-point lead at the 22-16 mark, but the Bears scored the final three points on blocks and kills. Four different Bucs recorded an assist: Caroline Dykes (Flower Mound, Texas), McKenna Dietz (Gray, Tenn.), Haley Sanders (Brentwood, Tenn.) and Taylor Roberts (Sneads, Fla.). Roberts posted a team-high six digs to bring her total to seven. Vazquez posted a team-high five kills this set as the Bucs put up 12 kills against a stingy Mercer defense. The Bears put up three blocks and three aces this set.

Set 3 (MER, 25-23): Neither team got off to a quality start as both teams recorded a block and Mercer committed a few service errors to give ETSU the lead at 9-6. The lead wouldn’t last long, as the Bears went to what they do best in their defense, taking a few blocks and attack errors from ETSU to regain the lead and hold on for good. Forster and Shafer combined for kills late in the set to tie, but Mercer found their rhythm and held off a late comeback from the Bucs. Forster put up a set-high five kills on eight attempts, while Dietz dished out eight assists. Roberts was everywhere on the floor, snagging eight digs to put her match total at 15. The Bucs hit just .106 this set with 13 kills, while Mercer forced five blocks this set.

The Bucs face the Chattanooga Mocs on the road Tuesday, Nov. 9. First serve is scheduled for 6 p.m.