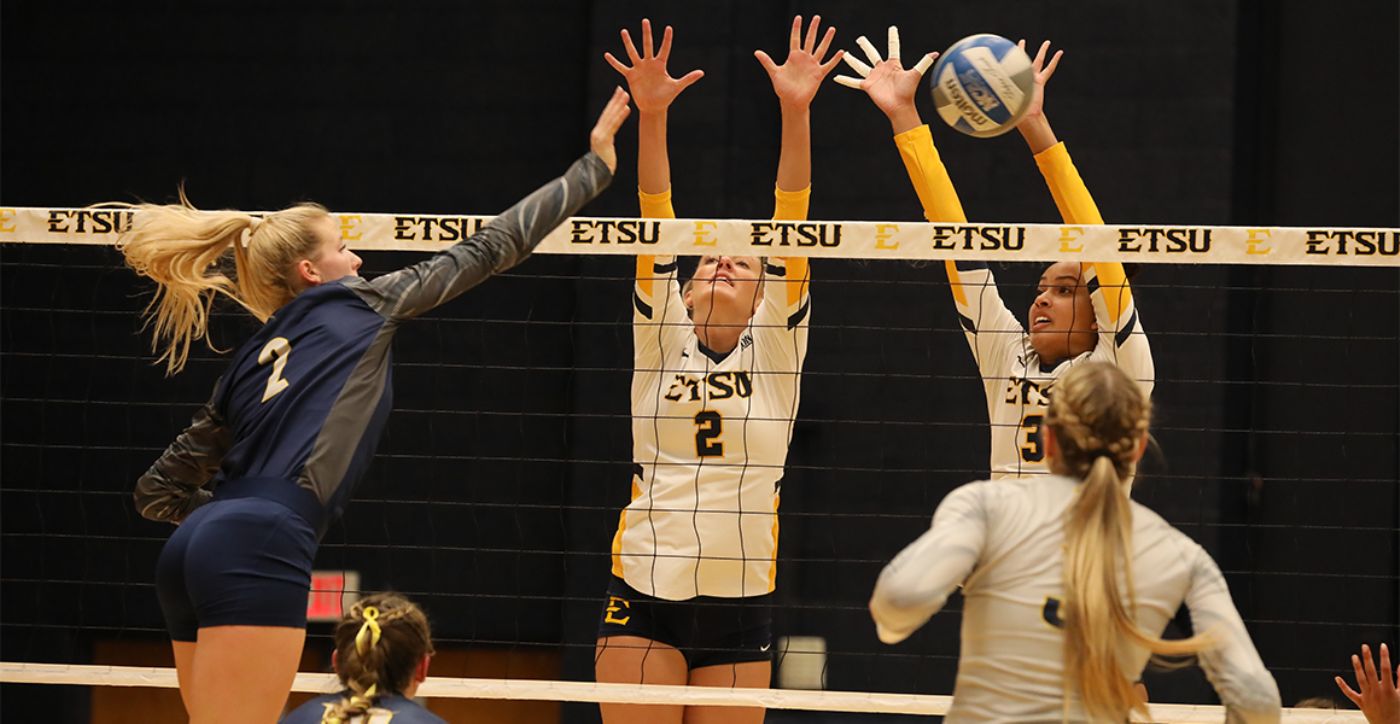 JOHNSON CITY, Tenn. (Nov. 8, 2021) – The Bucs look towards their final road regular season match with a Tuesday contest against Chattanooga at Maclellan Gym. ETSU won the matchup earlier this season in straight sets and has won three-straight on the road against the Mocs.

The Bucs embarked on arguably their hardest road conference trip, facing a Samford team that has now won four-straight matches and a Mercer team that was leading the conference standings. ETSU (11-14, 7-7 SoCon) fell in both of those matches, entering the last week of conference play tied for fourth in the conference with Western Carolina and Samford. The Bucs went 1-1 against their last two opponents, dropping a three-set match to Wofford but taking down Chattanooga in three sets. The Bucs offense has continued to run through the combo of Josannah Vazquez (Mansfield, Texas) and Sara Esposito (Pianiga, Venezia, Italy). Vazquez posted 21 kills in the four-set loss to Samford, her second 20+ kill performance this season. Esposito posted a career-high 22 kills in their road victory against the Citadel. The duo are the only Bucs this season to post 15+ kills in a match this season. Vazquez is eight kills away from 300 this season, while Esposito is 25 kills away from that feat. Esposito posted 305 kills her sophomore year, and was one of four Bucs to post as much in a season (Kaela Massey – 349, Lauren Hatch – 344, Olivia Cunningham – 319). Esposito is also 37 kills away from 800 in her career. Freshman phenom Caroline Dykes (Flower Mound, Texas) has continued to put up big numbers for the Bucs offensively and defensively. Dykes leads the team with 782 assists and 8.99 assists, good for sixth in the conference in both categories. Dykes posted a career-high 51 assists in the loss against UNCG, the highest mark for a freshman setter in the conference this season. The freshman also has 16 double-doubles this season, the most by a true freshman in the last decade. She has the fourth-most double-doubles in a season, behind ETSU Volleyball legend Megan Devine’s 22 set her senior year. Dykes is second on the team in digs behind Florida State transfer Taylor Roberts (Sneads, Fla.), who has been the starting libero all season. Roberts has enjoyed a career year, tallying 379 digs and 4.36 digs/set thus far, more than she put up in her three seasons down in Tallahassee. Vazquez joins the trio as the only three Bucs to have more than 200 digs this season. The Bucs rank fourth in the conference with 16.41 digs/set. At the net, Lundyn Coffman (Nolensville, Tenn.) has also seen a career year, putting up 14 solo blocks and 20 aces. The junior had nine solo blocks and four aces in her career entering this season. ETSU still sits second in the conference in assists/set (12.40) and fourth in aces/set in conference-only matches (1.48).

The Mocs find themselves in the bottom half of the standings entering the final weekend of play, pulling off a five-set upset against Mercer to spoil their senior night this past weekend. Libero Paige Gallentine is a three-time SoCon Defensive Player of the Week, ranking eighth in the nation in total digs and 24th in digs/set. The Mocs end their regular season at home against Wofford.

The Bucs swept the Mocs in their first meeting this season, backed by 11 aces in three sets. Sara Esposito put up 10 kills on .259 hitting, while Abbey Thomas recorded six kills with no errors. Gallentine put up 25 digs for the Mocs, while Taylor Roberts lead the Bucs with 19. ETSU hit .203 as a team while Chattanooga hit .175. The Bucs have won the last ten contests, dating back to 2016. The Bucs lead the all-time series 41-32.