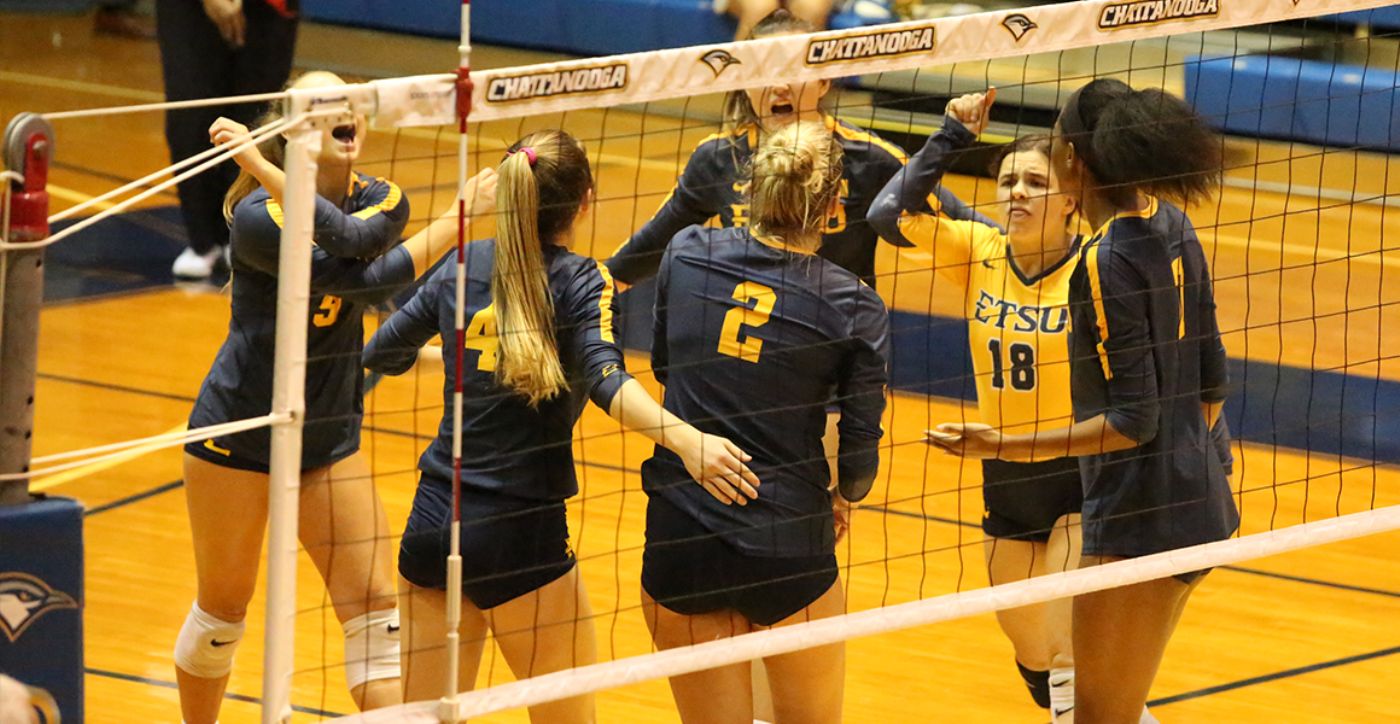 Set 1 (ETSU, 25-22): The set stayed close through the early going, with neither team taking any lead greater than two until a Samantha Shafer (Franklin, Tenn.) kill made it 10-7 ETSU. The Mocs were able to steal a few points back to tie the set at 11, but that was the last chance Chattanooga had to take the set. Kills from Sara Esposito (Pianiga, Venezia, Italy) and Forster continued to put distance between ETSU and the Mocs. Chattanooga was able to scratch away three points while ETSU held set point, but a block from Esposito and Abbey Thomas (Goldsboro, N.C.) sealed the first set. Vazquez led the team with five kills in the set, while Caroline Dykes (Flower Mound, Texas) put up nine of ETSU’s 16 assists. The Bucs put up 16 kills on .256 hitting, holding the Mocs to .195 on 14 kills. Each squad mustered up a block, but ETSU’s came at the most crucial point.

Set 2 (UTC, 26-24): The Mocs took hold of the early portion of the set, getting an ace and two blocks to maintain the lead. ETSU would return the favor with a solo block from Vazquez and an ace from Haley Sanders (Brentwood, Tenn.) to tie the set. Kills from Vazquez and Asia Mattress (Mauldin, S.C.) put the Bucs in the driver seat, but Chattanooga responded quickly with a slew of kills themselves. ETSU would win the race with 20 with a kill from Vazquez, but a service error and kill from Chattanooga tied the set at 21. The Bucs would take the first point following the timeout, but Chattanooga stole the next three to set up set point. A couple of kills from Shafer and Esposito tied the set at 24, but a pair of kills from the Mocs tied the match at one. Vazquez put up another five kills, increasing her match total to 10. ETSU put up more kills than Chattanooga this set (14 compared to 13), but seven attack errors to two from UTC proved the difference. The Mocs put up four blocks this set.

Set 3 (UTC, 25-18): A few kills and some ETSU attack errors gave the Mocs the lead right out the gate, going up 6-0 before a kill from Dykes stopped the bleeding. The Bucs would gradually cut at Chattanooga’s lead, getting some offense from Forster and an ace from McKenna Dietz (Gray, Tenn.) to make it a two-point lead for UTC at 12-10. Chattanooga was able to force some ETSU errors and took grasp of the third set handedly. Both teams recorded just 11 kills, but 10 attack errors from ETSU allowed Chattanooga to take a lot of momentum into a pivotal fourth set.

Set 4 (ETSU, 25-19): With Chattanooga looking to put away the Bucs, Forster was not going to let that happen. The sophomore-lefty got going early with a kill to tie the set at two, but the majority of her production came late and timely. After UTC tied the set at 12, Forster grabbed her third kill of the set and added an ace to completely swing momentum in favor of the Bucs. Shafer and Vazquez would combine for a few more kills and really put space between the Mocs and the Bucs. Forster finished what she started with two kills and a block. She ended the set with six kills on nine attempts. Vazquez and Shafer each added four. ETSU put up 18 kills on .361 hitting to enter their second fifth-set match of the season. Chattanooga did not record an ace or a block this set.

Set 5 (UTC, 15-12): Momentum was in favor of the Bucs after the way the fourth set ended, but Chattanooga used an ace and block to take hold of the early part of the set. Forster, Vazquez and Shafer would add some more offense, while perfectly-placed ace from Taylor Roberts (Sneads, Fla.) in the Bermuda triangle of Chattanooga’s defense kept it close. The Bucs held off two match points from Chattanooga, but their offense got through and ended any comeback from ETSU. Forster put up five of ETSU’s eight kills this set, while Dykes and Roberts each added three digs in the final set.

The Bucs end the regular season at Brooks Gym against Wofford for Senior Night. First serve is scheduled for 6 p.m. The match will be broadcasted on ESPN+.