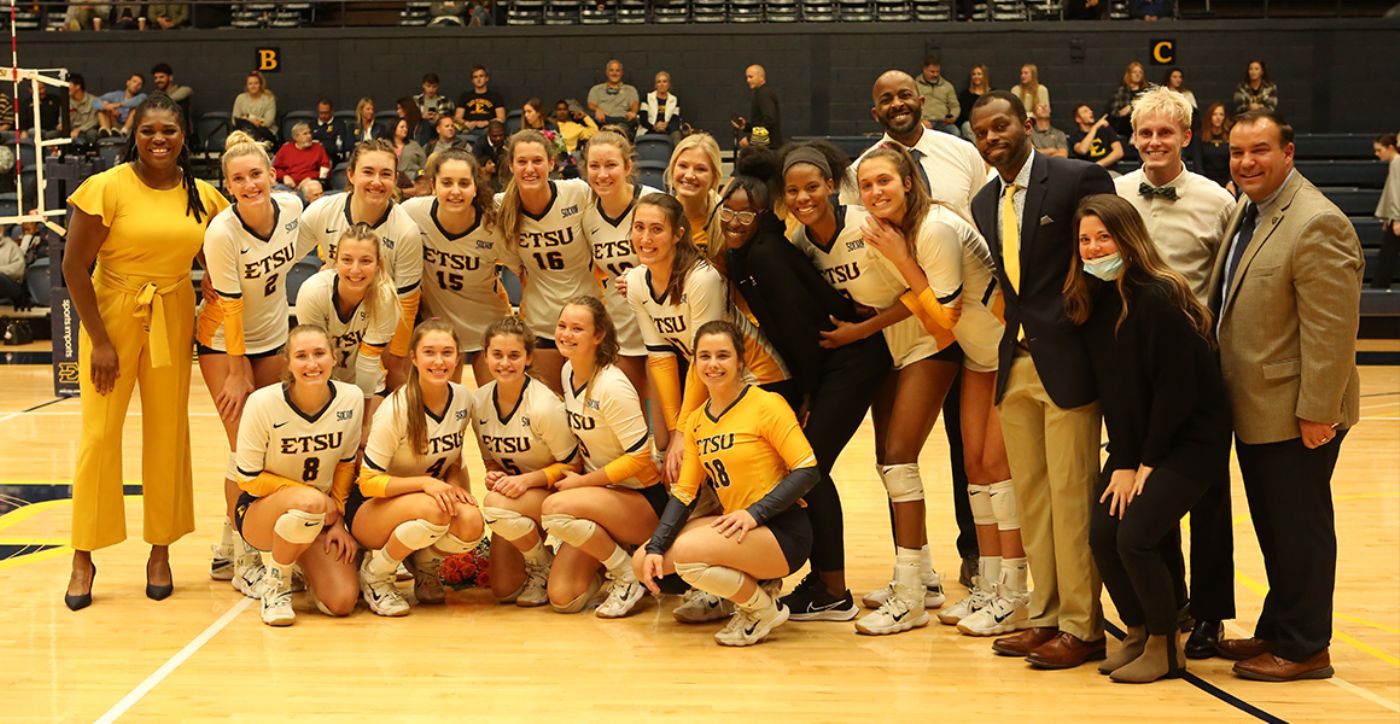 Set 1 (WOF, 25-21): Wofford got hold early, going up 5-1 before the Bucs, but kills from Esposito and Samantha Shafer (Franklin, Tenn.) got the set tied at 6. Both teams would trade a few service errors to keep this close, but a 6-1 run by the Terriers late put Wofford into set point. Blocks from Josannah Vazquez (Mansfield, Texas) and Jenna Forster (Maryville, Tenn.) and a kill from Asia Mattress (Mauldin, S.C.) would allow the Bucs to survive a few set points, but the Terriers eventually found the court and took the first set. Both teams finished hitting under .200 in the set, with the Terriers garnering 14 kills compared to 13 from ETSU. The two seniors, Esposito and Vazquez, led the Bucs in kills after the first set with four and three, respectfully. Caroline Dykes (Flower Mound, Texas) put up a team-high 11 assists, one behind Wofford’s Emily Hodsdon. Both teams’ defense was putting up big numbers, as the Terriers posted five blocks while ETSU posted four. The Bucs mustered up 22 digs as opposed to Wofford’s 18.

Set 2 (WOF, 25-22): Wofford took the early lead and carried the momentum to force ETSU’s first timeout before ever reaching the media timeout. A couple of Esposito kills allowed some momentum to swing the Bucs way, along with the help of a few Wofford service errors. The Bucs were able to tie the set at 18, but the Terriers took the next six points en route to the two-set lead. Esposito led the Bucs again with five kills, bringing her total to nine through two sets. The Terriers put up 16 kills on .196 hitting to take the second set. Both teams posted three blocks.

Set 3 (ETSU, 25-20): The Terriers took the first three points, and one would think that they were going to carry that momentum and leave with a sweep, but the seniors had different plans. Both notched a kill at the beginning of the set, tying the set at five to bring the Bucs quickly back into the set. The two would trade some points, as the Bucs got some offense from Abbey Thomas (Goldsboro, N.C.). After an ETSU service error, Esposito found a rhythm on offense and defense that put the Bucs ahead big. On an 8-2 run, Esposito added three kills and a block to put the Bucs in a position to force a fourth set. The Terriers posted five consecutive points while ETSU was at set point, but a kill from Esposito made it official. The senior finished the set with eight kills on nine attempts with no errors. The Bucs hit .314 as a team, even with Wofford putting up three blocks. The Bucs held Wofford to 13 kills on .154 hitting, their lowest set hitting percentage in the match.

Set 4 (WOF, 26-24): After a largely defensive showing from both teams, the offenses got their time to shine and fireworks went off. Esposito and Thomas would continue to find the center of the court with their attacks, with both contributing to the team’s first five kills of the set. Esposito and Dykes each added an ace in the first half of the set, taking a 15-12 lead into the media timeout. The Terriers would eventually crawl back, tying the set at 20 with back-to-back kills. Both teams would trade points, as Vazquez and Ally Johnson (Rogers, Minn.) would notch a couple of crucial kills to put ETSU at set point up 24-23. The Terriers would get the following three points, and bar any comeback from the Bucs. Esposito posted another six kills, finishing the night with a career-high 23 kills. Thomas and Vazquez each put up four kills, as part of ETSU’s 18 kills on .208 hitting. Wofford’s offense was in rhythm, totaling 19 kills on .421 hitting with three errors. Two of those errors came from blocks by Thomas and Forster.

The Bucs face the SoCon Conference Tournament next weekend in Birmingham, Ala., for the rights to an automatic bid to the NCAA Tournament. ETSU still waits on weekend matches to see where they are seeded.