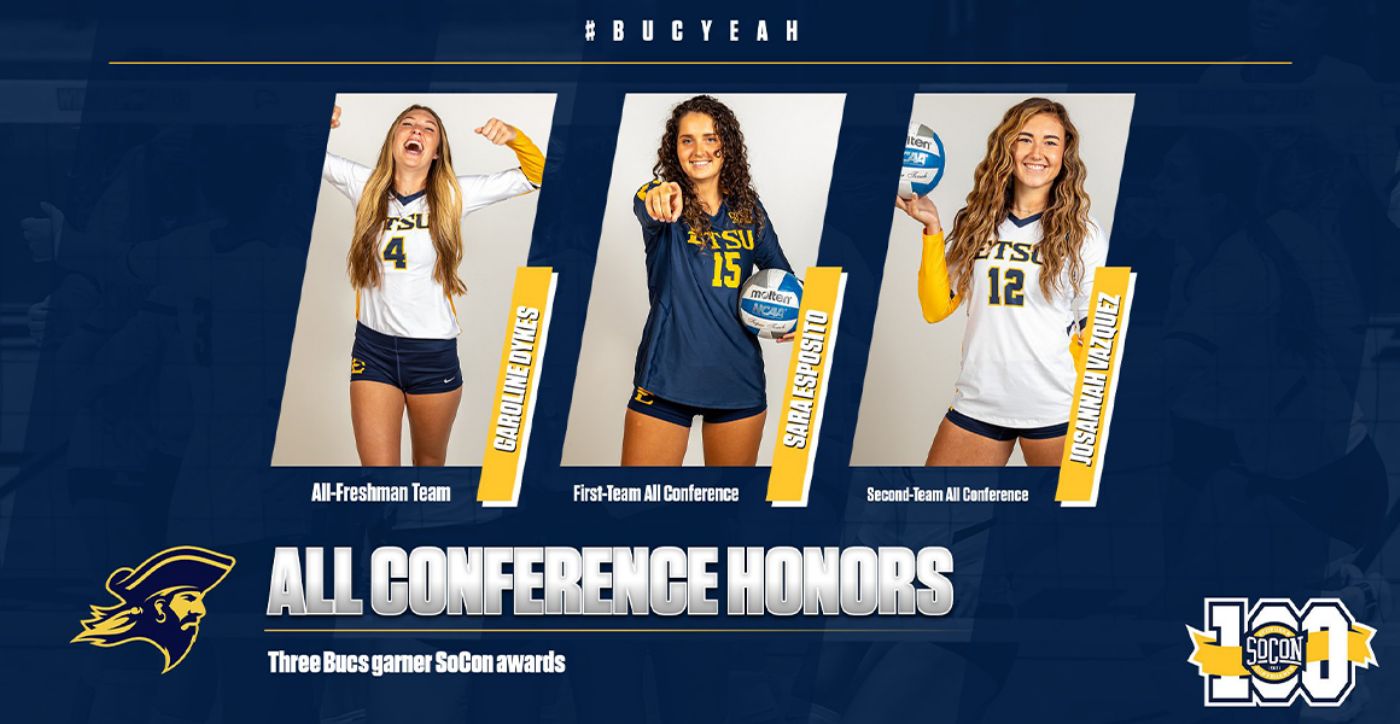 It’s the second yearly award that Esposito has been awarded after earning a Second-Team All-Conference selection in the spring. Esposito found her groove as conference play ramped up, posting double-digit kills in eight of the ten October matches ETSU played against. Her performance was a big reason ETSU went 7-3 in the month of October and was looking at a top-half seed going into this weekend. The four-year letterwinner finished the regular season with 307 kills and 3.27 kills/set on .228 hitting. This is her second season finishing the regular season with over 300 kills. Her 307 kills and 3.27 kills/set are career-highs in a season as she finished the 2019 season with 305 kills. One of two seniors, Esposito needs one kill this weekend to eclipse 800 in her career.

Going into her last year of eligibility, Vazquez made the transition from beach to indoor to play under Head Coach Benavia Jenkins. In her lone year, Vazquez led the team with 320 kills and 3.33 kills/set. Vazquez got off to an incredible start to enter this year, nothing 13 kills on .444 hitting against Texas Tech, and recorded a season-high 21 kills at Samford in early November. Vazquez has recorded 20+ attack attempts in every match this year with a season-high of 54 attempts in that match aforementioned. The transfer also recorded 252 digs and 2.63 digs/set, both good for third on the team. Vazquez recorded eight double-doubles on the season, with her last coming off a 19-kill, 17-dig performance in the heart-breaking five-set loss to Chattanooga on the road. Vazquez was named to the Tennessee Classic All-Tournament team after posting 33 kills in her first three matches.

Dykes has been the go-to setter all season long, and her stats and being named to the All-Freshman team proves that. Dykes adds to her awards this year after winning back-to-back Setter of the Week awards in late September. Dykes led the team in assists (867), assists/set (9.03), and aces (27). The first-year setter had some big shoes to fill after Emily Arnold transferred, but Dykes has made it happen for the Bucs. Dykes also leads the team in double-doubles this season with 18. No true freshman has posted more double-doubles in a season in the last decade. Her 18 ranks third-most in a season behind the legendary Megan Devine, who recorded 74 double-doubles in her career. This is the third-straight season an ETSU freshman has been named to the All-Freshman Team, with Jenna Forster (Maryville, Tenn.) earning honors last year and Olivia Cunningham (Knoxville, Tenn.) winning SoCon Freshman of the Year in 2019.

The Bucs play the tournament-host Samford Bulldogs in the quarterfinal round of the 2021 SoCon Volleyball Tournament. First serve is set for 8:30 EST. The match will be broadcasted on ESPN+.