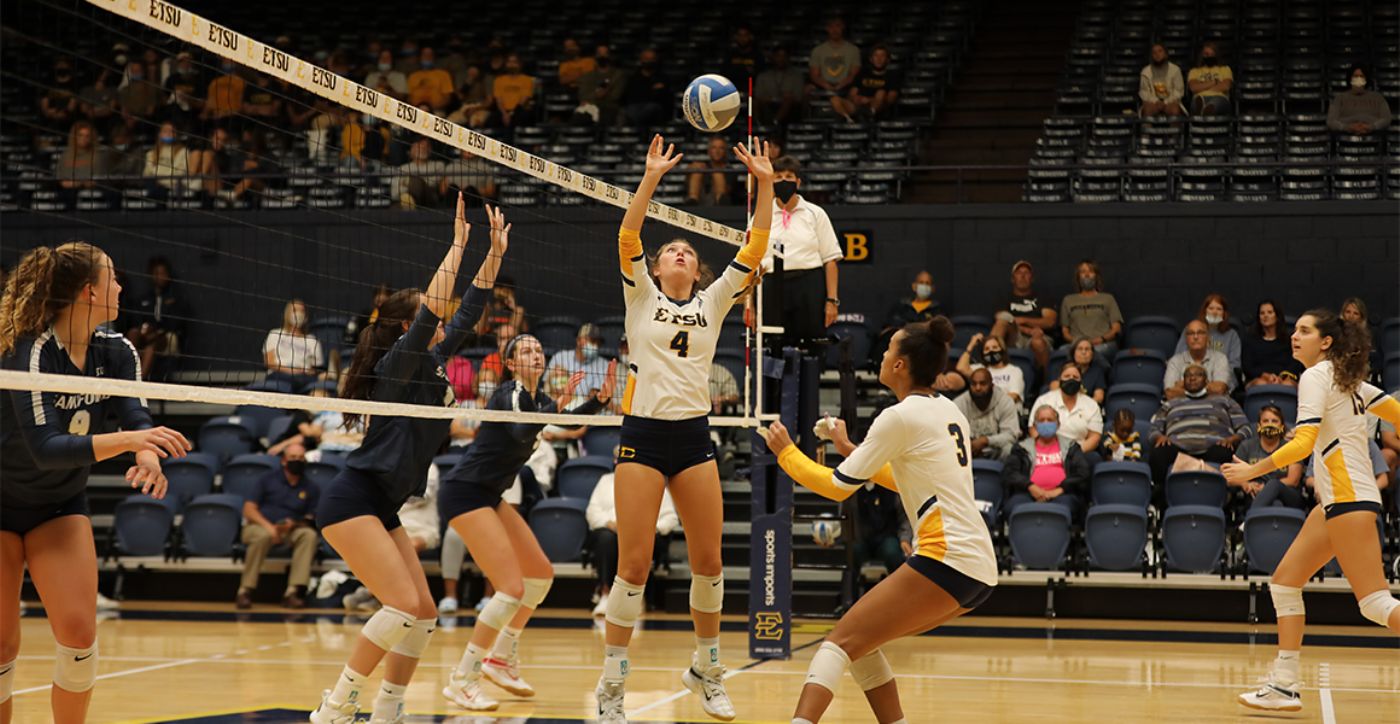 The two split the season series this year

JOHNSON CITY, Tenn. (Nov. 18, 2021) – The time has come. The quest to earn the Southern Conference’s automatic qualifying bid to go to the NCAA Tournament begins tomorrow. The Bucs drew the #6 seed and will face the tournament-host Samford Bulldogs. Each team won their respective home game during the regular season.

After dropping their last four regular season matches, the Bucs (11-16, 7-9 SoCon) enter the conference tournament with the same conference record from last spring. This is the first time since 2009 that the Bucs finished a full fall season with a conference record under .500, when they were still in the Atlantic Sun conference. The Bucs are tasked with facing a hot Samford team that has won their last six matches, five of which came in Birmingham. The Bucs offense has continued to run through the combo of Josannah Vazquez (Mansfield, Texas) and Sara Esposito (Pianiga, Venezia, Italy). In her first season back from playing beach volleyball, Vazquez led the Bucs with 320 kills and 3.33 kills/set. Vazquez earned Second-Team All-Conference recognition for her performance. Esposito, in her final year, notched 307 kills on .228 hitting, the highest mark among hitters with at least 50 kills this season. This is Esposito’s second season amassing 300 kills in a season, doing so in 2019 when she recorded 305. Esposito broke her career-high kills in a match twice this season, notching 22 kills in a four-set win over The Citadel on the road, and ended her fantastic year with 23 kills in the four-set loss to Wofford on senior night. Esposito earned First-Team All-Conference recognition, the only official right-side hitter to be named First-Team. Freshman phenom Caroline Dykes (Flower Mound, Texas) has continued to put up big numbers for the Bucs offensively and defensively. Dykes leads the team with 867 assists and 9.03 assists/set. Dykes posted a career-high 51 assists in the loss against UNCG, the highest mark for a freshman setter in the conference this season. The freshman also has 18 double-doubles this season, the most by a true freshman in the last decade. She has the fourth-most double-doubles in a season, behind ETSU Volleyball legend Megan Devine’s 22 set her senior year. Dykes earned a spot on the All-Freshman team. Dykes is second on the team in digs behind Florida State transfer Taylor Roberts (Sneads, Fla.), who has been the starting libero all season. Roberts has enjoyed a career year, tallying 417 digs and 4.34 digs/set thus far, more than she put up in her three seasons down in Tallahassee. Vazquez joins the trio as the only three Bucs to have more than 200 digs this season. The Bucs rank fourth in the conference with 16.38 digs/set and first in assists/set with 12.14. At the net, Lundyn Coffman (Nolensville, Tenn.) has also seen a career year, putting up 14 solo blocks and 20 aces. The junior had nine solo blocks and four aces in her career entering this season. ETSU sits first in the conference in assists/set (12.54) and fourth in digs/set in conference-only matches (17.31).

The last time ETSU was in Birmingham, the Bulldogs took the match 3-1 to notch their fourth-straight four-set win. Vazquez led the Bucs with 21 kills, while Samford’s Kenya McQuirter posted a match-high 22. The Bulldogs notched 14 blocks in the win while ETSU managed just five. The Bucs hit an even .150 on the afternoon, as Esposito was the only other Buccaneer in double figures in kills. The all-time series is tied at 10.