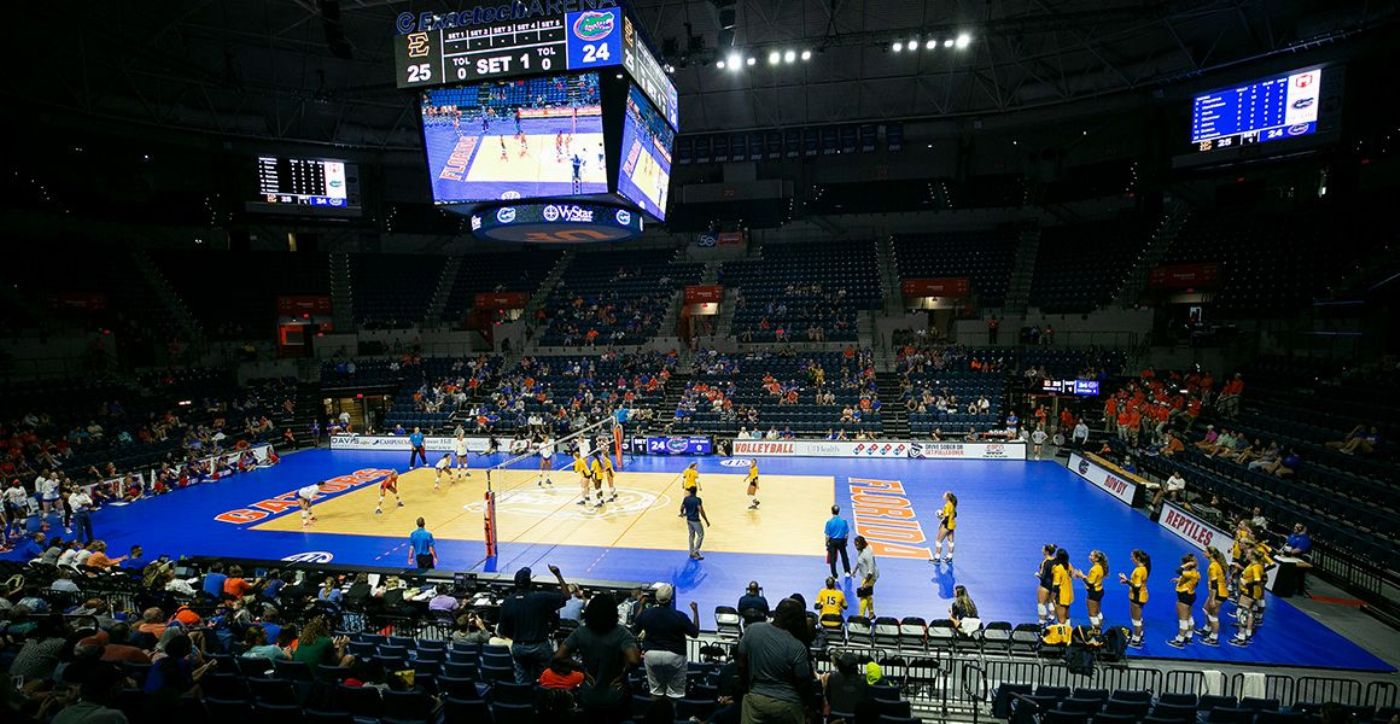 Bucs fall to No. 15 Florida and UNF on Saturday

With the pair of setbacks, ETSU opens the season 0-3 for the first time since 2017 when the Bucs dropped three straight at the Lipscomb Volleyball Invitational.

ETSU began the day putting a scare into the host Gators as the Bucs rallied to win the opening set, 26-24. In the second, the Blue and Gold led 13-12 following an ace by Taylor Roberts (Sneads, Fla.), but then with the score knotted at 14, Florida ended the frame on an 11-3 run to pull even in the match. From there, Florida posted a wire-to-wire win in the third – and after ETSU started strong in the fourth – the Gators pulled away midway through the stanza, ending the match with a 25-15 victory.

Jenna Forster (Maryville, Tenn.) led the Bucs with eight kills against the Gators, while Abbey Thomas (Goldsboro, N.C.) hit .385 (5-0-13) in the match. Sophomore Caroline Dykes (Flower Mound, Texas) accounted for 27 of the Bucs’ 33 assists and Roberts totaled 16 of ETSU’s 34 digs. The serving game caused the Blue and Gold problems as they committed 14 service errors, compared to 10 aces by Florida. The Gators were also plus-8 in blocks, 14-6.

In the nightcap, ETSU and UNF played two tightly contested sets before the Ospreys pulled away in the third to complete the sweep.

In the first set, neither team led by more than two points until ETSU opened a 16-12 lead following an ace by Taylor Roberts. Unfortunately, the Bucs couldn’t put the Ospreys away, as UNF mounted an 8-1 run to regain a 20-17 advantage. ETSU was able to pull within one twice in the late stages of the opener, but with the scoreboard reading 22-21, UNF won three of the final four points to take the first, 25-22.

Just like first, the teams were unable to gain any breathing room in the second until UNF opened a 19-15 lead. The Bucs were able to inch within a point by winning four of the next five, cutting the deficit to one, 20-19. However, after getting within a point on two other occasions, the Bucs were unable to get over the hump, as the Ospreys again won three of the last four points for another identical 25-22 victory.

The Bucs fell behind early in the third and never regrouped as UNF ended the match with a 25-12 win.

Whitley Rammel (Ft. Recovery, Ohio) provided the Blue and Gold with a spark as she led ETSU with eight kills on a .545 attack percentage, while Caroline Dykes registered 21 of the Bucs’ 25 assists. UNF was led by Mahalia White (15 kills) and Kailey McKnight (12 kills) as they combined for 27 kills and White hit .619 for the match.

ETSU returns to the court next Friday as the Bucs head to Durham, N.C. for the Duke Invitational. The Blue and Gold open play against the host Blue Devils Friday at Noon.