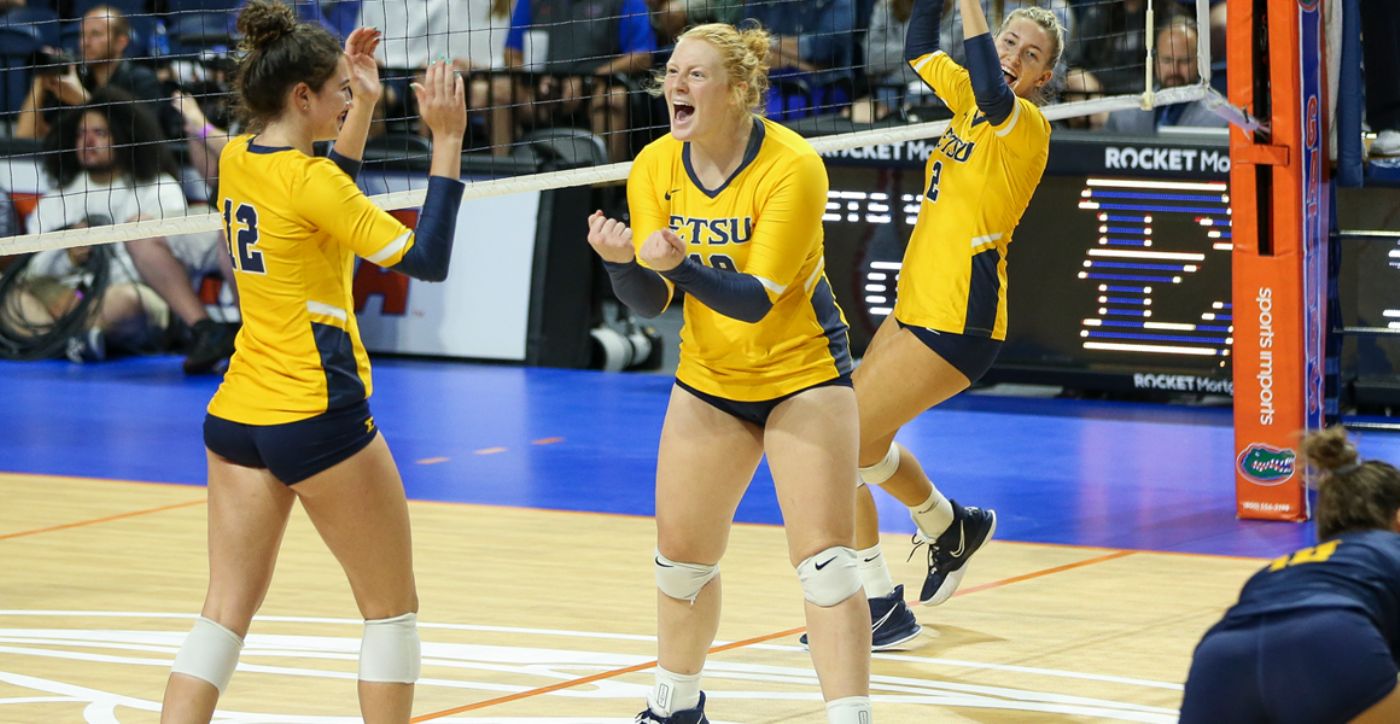 Behind a well-balanced attack and a double-double by sophomore setter Caroline Dykes (Flower Mound, Texas), the Buccaneers earned their first victory of the season as ETSU defeated East Carolina in five sets (25-14, 14-25, 25-22, 23-25, 15-9) in its final match of the Duke Invitational on Saturday afternoon inside Cameron Indoor Stadium.

Haley Sanders (Brentwood, Tenn.) and Lauren Hatch (Homewood, Ill.) joined Dykes with double-digit digs as they combined for 24 of ETSU’s 64. Sanders notched 13 to go with four assists and Hatch finished with 11. Lundyn Coffman (Nolensville, Tenn.) joined Rammel with a hot arm as she ended with a .455 attack percentage (7-2-11) and added six digs.

With the win, ETSU snapped its five-match skid and moved to 1-5 on the season, while East Carolina dropped to 2-3.

The second set was a bit bumpy for the Bucs as ECU flipped the script and won, 25-14, before ETSU bounced back with a 25-22 victory in the third. The Blue and Gold never trailed in the frame despite there being three ties early on in the stanza. With the score even at three, ETSU won eight of the next 10 points to open a 11-5 advantage when Sanders set Forster up for a kill. East Carolina didn’t back down as they inched within two at 21-19, 22-20 and 23-21, but kills from Rammel and Forster gave ETSU a 2-1 lead in the match. The Bucs hit .308 as a team in the frame and got six kills each from Forster and Cantrell, while Dykes registered 14 of ETSU’s 17 assists.

After the fourth set had seven ties and two lead changes, ETSU was unable to put away the Pirates as ECU hung on for a 25-23 win after capturing the last two points of the frame en route to forcing the decisive fifth set.

Fortunately, the Bucs regrouped and stormed out of the gates in the final frame, as they won four of the first five points and pushed their lead to 10-5 thanks to a kill by Cantrell. East Carolina forced the Bucs to burn a timeout after cutting the deficit to two, 10-8, but the break worked as ETSU closed the match on a 5-1 run to secure the 15-9 victory.

The Bucs now return home to Johnson City to host the Buccaneer Invitational, which gets underway inside Brooks Gym on Friday, Sept. 9. ETSU takes on Georgia State in the opener at Noon and closes up day one against Clemson at 7 p.m.