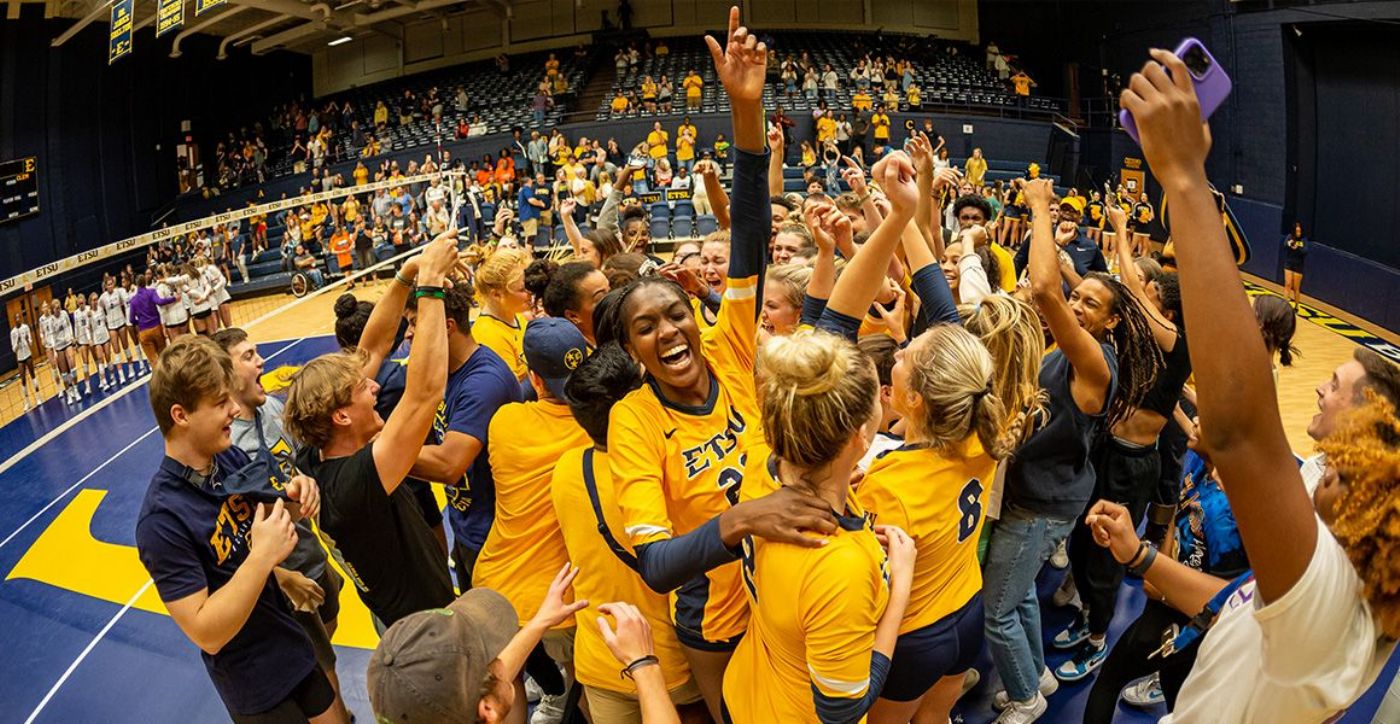 JOHNSON CITY, Tenn. (Sept. 9, 2022) – For the first time since 2016, ETSU hosted a volleyball tournament inside Brooks Gym, opening play with a 3-0 sweep of Georgia State and an exciting 3-2 victory against Clemson on Friday in Johnson City.

The Buccaneer Classic also served as ETSU’s home opener, as over 700 fans packed into Brooks Gym for its first glimpe of the Bucs on its new-and-improved volleyball court.

The Bucs move to a 3-5 record and will wrap up tournament play tomorrow at 1 p.m. against USC Upstate.

ETSU secured its first sweep of the season with three competitive set wins over Georgia State Friday afternoon. The Bucs set the tone with six straight points out of the gate and never lost the lead, winning the set 25-18. The second set started nearly the same way with five ETSU points, and much like the opening frame, the Blue and Gold never lost the lead. The Panthers pulled within one with a 5-0 run to make it 16-15, but Jenna Forster (Maryville, Tenn.) and Brianna Cantrell (Appleton, Wisc.) had a pair of kills down the stretch to secure the second frame, 25-18.

The third set was a see-saw battle most of the way, with the Panthers earning their first lead of the match at 9-8. Later in the set, the teams were knotted at 15-15, but the Bucs gained some key momentum with three straight points on kills from Cantrell and Amanda Lowe (Blacksburg, Va.), followed by a service ace from Cantrell. The Bucs went on to finish things off with a Cantrell kill to win 25-19.

Forster led the Bucs with 15 kills against the Panthers, while sophomore Caroline Dykes (Flower Mound, Texas) led in assists for the seventh straight game with 32 while adding eight digs. Cantrell was slightly off a double-double with 12 kills and nine digs, while owning a team-best .345 attack percentage. Sophomore libero Haley Sanders (Brentwood, Tenn.) led defensively with 15 digs.

ETSU hit .223 for the match, including a .323 percentage in the first set, while limiting the Panthers to a .172 attack percentage for the match. Georgia State was led by Laura Ehieze with six kills.

The nightcap brought many highs and lows, but the Bucs powered through in the end for a come-for-behind five-frame win over the Tigers in front of an energetic crowd at Brooks Gym.

The tone was set in the opening set with ETSU winning 26-24 to take an early lead. Clemson led most of the set, but the Bucs worked back into it and retied the game at 21-21. Later, the Tigers forced a set point situation at 24-22, but ETSU rattled off four straight points to steal away the set and send the crowd into a frenzy. There were four lead changes in the opening set. Six Bucs had at least one kill in the first set, while Dykes added 10 assists.

Clemson earned two convincing set wins to regain the advantage, winning 25-12 in Set 2 and 25-17 in Set 3. The Tigers had an eye-catching .619 attack percentage with 14 kills and just one error in the second frame, earning back some of the momentum.

It didn’t look good early in the fourth set, but the Bucs evened things up again with a gritty 25-23 set win in the fourth frame. Clemson led by as many as six points early on (8-2), but ETSU surged back ahead with a 7-1 run to make it 14-12. The Bucs never lost the lead again, but Clemson made it interesting at 23-23. Needing two points to stay alive, a pair of Tiger miscues allowed the Bucs to force a fifth set. Sophomore Amanda Lowe (Blackburg, Va.) led the way with five kills, while Cantrell had 10 digs in the frame.

In the race to 15 points, there were three lead changes. ETSU started with a 4-3 lead, but Clemson scored four straight to hush the raucous crowd momentarily. Much to Clemson’s chagrin, the flood gates opened as the Tigers tried clinging to a 12-9 lead, but ETSU went on a 6-0 run to win the set and the match.

Despite being outkilled 61-46, ETSU found its momentum defensively with a 15-5 advantage in blocks. Olivia Cunningham (Knoxville, Tenn.) had a team-high 10 kills, while Lundyn Coffman (Nolensville, Tenn.) impacted the game with a game-high 8.0 blocks. Four Bucs had higher block totals than Clemson’s leader, including Whitley Rammel (Ft. Recovery, Ohio) with 6.0 and Jenna Forster (Maryville, Tenn.) and Kimani Johnson (Southfield, Mich.) with 4.0.

The Buccaneer Classic concludes Saturday with Clemson vs. Georgia State at 11 a.m. and ETSU vs. USC Upstate at 1 p.m. – all inside Brooks Gym. The Bucs will seek their fourth straight win on Saturday.