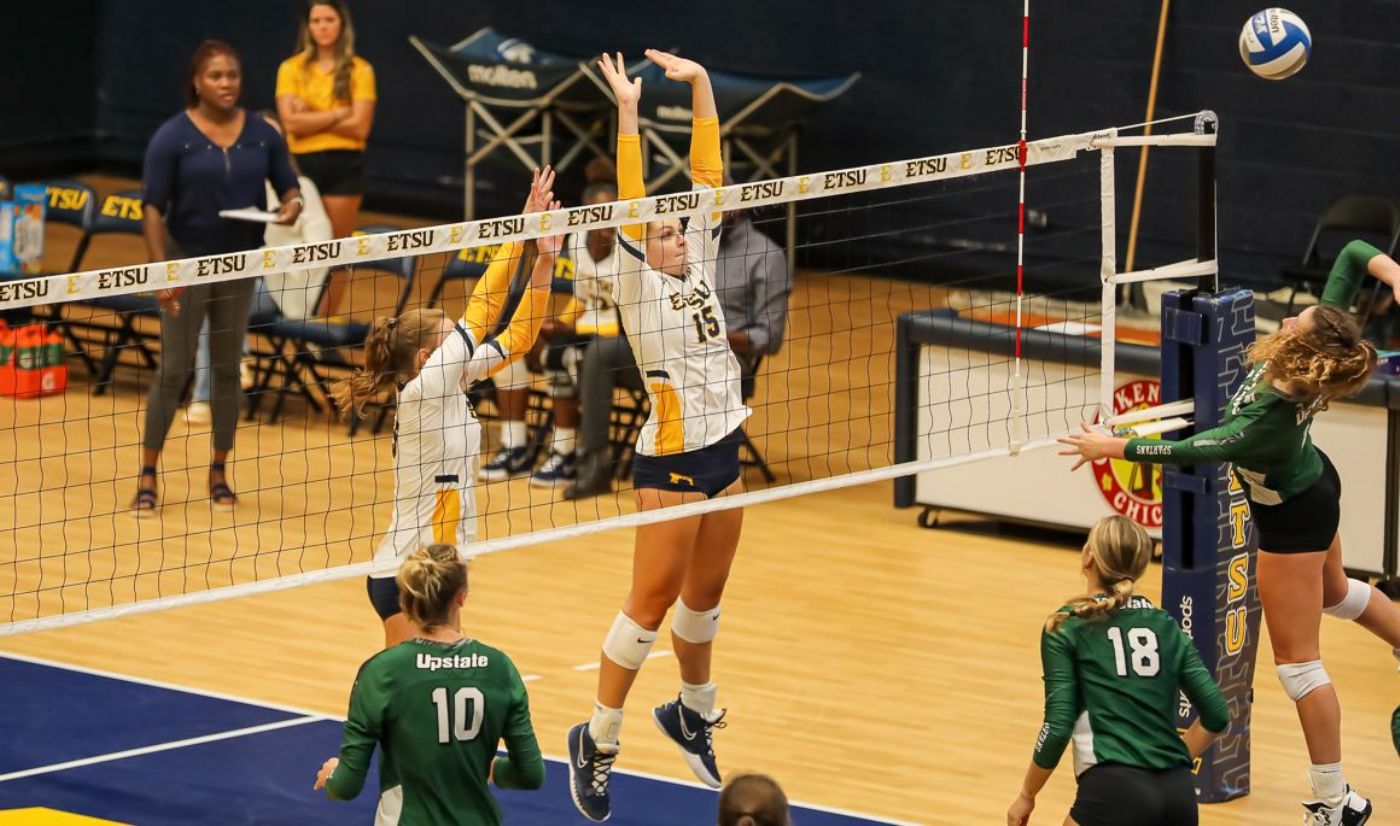 JOHNSON CITY, Tenn. (Sept. 10, 2022) – The ETSU volleyball team is beginning to catch its stride, completing the Buccaneer Classic trifecta with a 3-1 win over USC Upstate on Saturday inside Brooks Gym.

After a rocky start to the season against stiff competition, the Bucs now ride a four-match win streak and enter next week’s tournament at Austin Peay with a 4-5 record. ETSU defeated Georgia State, Clemson and USC Upstate to win its home tournament – the first one hosted in Brooks Gym since 2016.

Lowe finished the tournament with a steady 29 kills and a .383 attack percentage, including 13 kills and a .542 percentage against USC Upstate, while adding six blocks for 32.5 total points. Meanwhile, Rammel had 17 kills and a tournament-high 17 blocks over three matches, including 11.0 blocks in today’s win over the Spartans. Rammel was just three total blocks off the four-set school match record set in 1988 by Kim Byrd with 14.

As a team, ETSU had a 58-48 advantage in kills and never hit below .200 in a single set to finish with a .305 attack percentage for the match. Meanwhile, USC Upstate struggled in its attack with a match percentage of .133. ETSU didn’t help those efforts with 13.0 total team blocks.

The first set provided fans with early entertainment, as ETSU held a slim lead most of the way through. USC Upstate gained the momentum late with a 4-0 run, taking a 22-20 lead. ETSU went on to force set point sparked by kills from Lowe and Jenna Forster (Maryville, Tenn.), but Upstate survived and went on to win the opening frame 28-26.

The second set was a see-saw battle with the score tied 13 times, but the Bucs would even the match with a pair of large runs at the end. Down 15-14, ETSU went on separate 5-0 and 4-0 runs to gain a comfortable lead and eventually win 25-20. In that span, the Bucs impressed with four blocks, four kills and a service ace by Haley Sanders (Brentwood, Tenn.). Lowe had three of the four kills, while Cantrell had the other. Rammel was in on all four blocks with one solo and three assists, igniting the run.

ETSU took a 7-1 lead in the swing set and never looked back, leading the whole way while out-hitting the Spartans .424 to .156. ETSU had 17 kills and only three miscues all set. In the fourth set, the first 18 points were traded back-and-forth to make it 9-9 early, but the Bucs pulled away with an 8-0 run and won 25-17 to cap the tournament sweep.

Next week, the Bucs are back on the road with a short trek to Clarksville for the Stacheville Challenge from Sept. 16-17. On Friday, ETSU faces in-state rivals UT Martin (11 a.m.) and Austin Peay (7:30 p.m.) and end the tournament with North Dakota State on Saturday at noon.