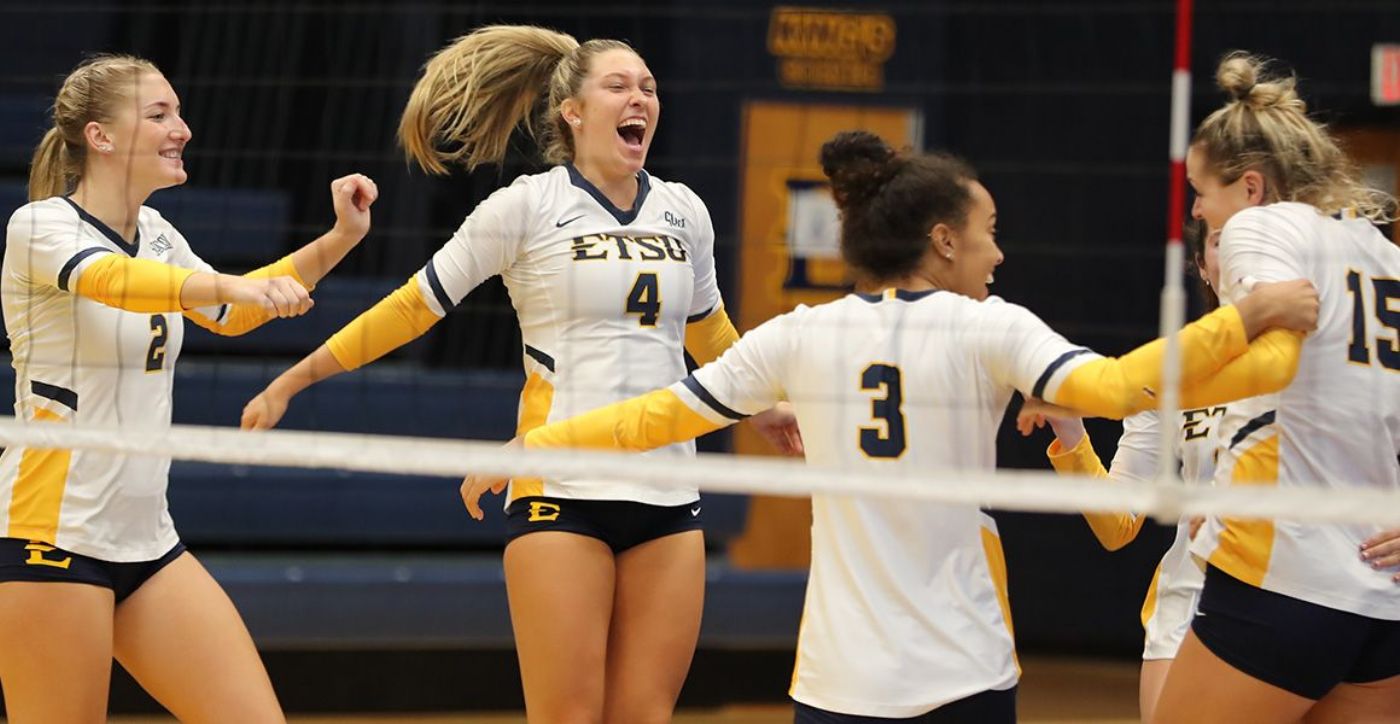 CLARKSVILLE, Tenn. (Sept. 16, 2022) – ETSU volleyball took on a pair of in-state foes at the Stacheville Challenge in Clarksville, Tenn. on Friday, earning a 3-0 sweep over UT Martin and falling in a competitive 3-0 battle against host Austin Peay.

After starting the season with an 0-5 overall record, the Bucs evened it up Friday morning with a fifth-straight victory – sweeping the Skyhawks. The nightcap ended the winning streak as Austin Peay defended its home court. ETSU now sits at 5-6 with one non-conference match remaining.

The Bucs started the invitational with their fifth straight win – the first such streak since 2019 – en route to a dominant 3-0 sweep of UT Martin. ETSU looked stronger in each frame with set wins of 25-19, 25-18 and 25-13, respectively.

ETSU had an efficient attack all match with 39 kills and a .292 attack percentage, while the Skyhawks had 29 kills and 18 errors for a .117 clip. The Bucs also had a 7-2 advantage in service aces.

Sophomore Caroline Dykes (Flower Mound, Texas) was a key component in all facets of the match with a match-high 25 assists, five kills on six attempts for an .833 percentage, six digs, two blocks and two service aces.

The first set started even, but a 7-0 Buccaneer run gave ETSU a comfortable 15-7 advantage. The Skyhawks later pulled within three (21-18) but ended their run with a service error and dropped four of the next five points. UT Martin had a 13-10 advantage in kills, but also had three more errors in the set.

ETSU became more efficient in the second set with 13 kills and a .406 kill percentage, losing the first point but taking the next two to lead the rest of the set. A pair of blocks by Coffman with assists from Amanda Lowe (Blacksburg, Va.) and Jenna Forster (Maryville, Tenn.) sparked a 4-0 run that ultimately provided enough cushion.

The third set was all Bucs, as the Blue and Gold tallied 16 kills with just two errors for an efficient .467 attack percentage while limiting UT Martin to just eight kills and four errors. Cantrell, Forster, Lowe, Coffman, Dykes, Abbey Thomas (Goldsboro, N.C.), Lauren Hatch (Homewood, Ill.) and Samantha Shafer (Franklin, Tenn.) all had at least one kill in the final frame.

The nightcap saw two competitive sets in the early going, but Austin Peay took advantage of two tight set wins en route to a competitive sweep of the Bucs.

An entertaining first frame took a tough turn for ETSU at the end, as the Govs finished on a 7-1 run to steal away the first set. Despite a 23-20 lead for the Blue and Gold, Austin Peay charged back with a 5-0 run to win 25-23. The second set went similarly despite ETSU’s 16-14 kill advantage, as the Govs once again edged the Bucs 25-23.

The third set got away from ETSU midway through as the Govs closed it out, 25-18.

Though the Bucs had 10 less attack errors in the match with just eight total, APSU surged ahead with a 50-37 kills advantage and a slight .320 to .309 edge in hit percentage. The Govs also had 43 digs to ETSU’s 28 to go with 11 service aces.

Jenna Forster (Maryville, Tenn.) posted a team-leading 14 kills, while Caroline Dykes (Flower Mound, Texas) chipped in 25 assists to lead the team in helpers for the 11th time in as many games.

The Bucs conclude the Stacheville Challenge Saturday at noon against North Dakota State in Clarksville.