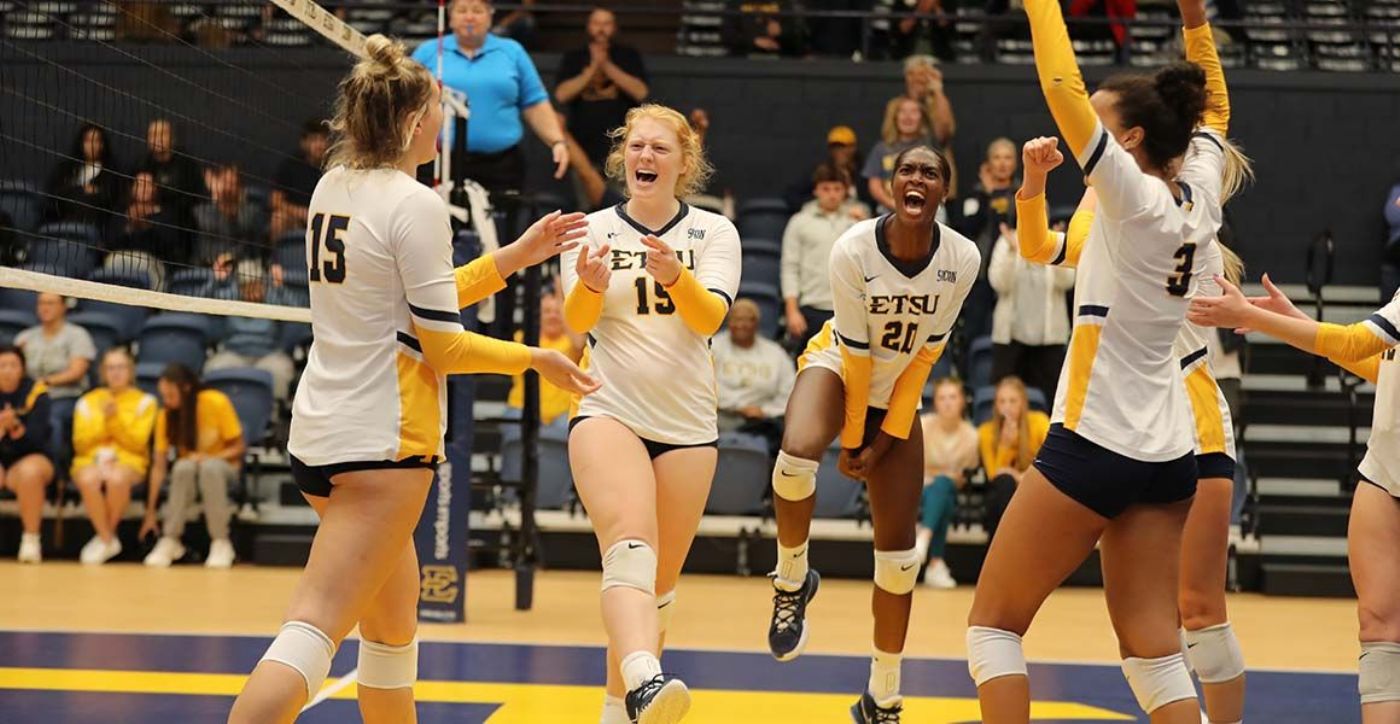 Bucs improve to 5-0 in matches inside Brooks Gym

JOHNSON CITY, Tenn. (Sept. 23, 2022) – ETSU volleyball won every phase of the match in Saturday’s Southern Conference contest against Furman, using a consistent attack and stifling defense to earn a 3-0 win over the Paladins inside Brooks Gym.

The Bucs improved to a 5-0 record at home and a 2-0 record in SoCon play, following a pair of wins over Palmetto State foes Wofford and Furman. ETSU improved to 8-6 overall with wins in eight of the last nine matches. Meanwhile, Furman drops to 4-9 overall and 0-3 in the conference.

ETSU finished with an even .250 attack percentage and out-attacked Furman in every frame, finishing with a 46-29 advantage. The Bucs totaled at least 15 kills in each set while limiting Furman to 10 or less each set.

Taylor Roberts (Sneads, Fla.) served as the team’s libero and led a defensive back line that totaled 42 digs, contributing 14 of those. Furman finished with a .105 attack percentage, struggling to find space within the inner mat.

Sophomore Caroline Dykes (Flower Mound, Texas) once again led the game with 39 assists – 12 more than Furman’s entire team. Dykes has led the team in every match so far. She also snuck through three kills and added seven digs.

The first set was the closest one with 11 ties, but the Bucs managed to pull ahead to a 24-20 lead via a kill from veteran spiker Olivia Cunningham (Knoxville, Tenn.). The Paladins hung around with three straight points to pull within one, but a service error ended their comeback bid.

The next two sets were all Bucs, both ending in 25-17 fashion. ETSU led 8-1 in the second frame powered by two kills each from Cunningham, Cantrell and Johnson, but Furman worked back in it and eventually took the lead at 11-10. ETSU then proceeded to go on a 6-0 run to break a 14-14 tie, starting that rally with a surprise attack by Dykes, to cruise to victory.

Some different faces made key kills in the closing frame, as the foes were knotted up at 10-10. Three straight kills by Johnson, Amanda Lowe (Blacksburg, Va.) and Whitley Rammel (Ft. Recovery, Ohio) broke the tie and put ETSU ahead for good. Lowe had the final kill, while Lundyn Coffman (Nolensville, Tenn.) added a pair of late service aces down the stretch.

The Blue and Gold hit the road for their next four volleyball matches, beginning with Samford on Friday, Sept. 30 at 7 p.m. in Birmingham, Ala.