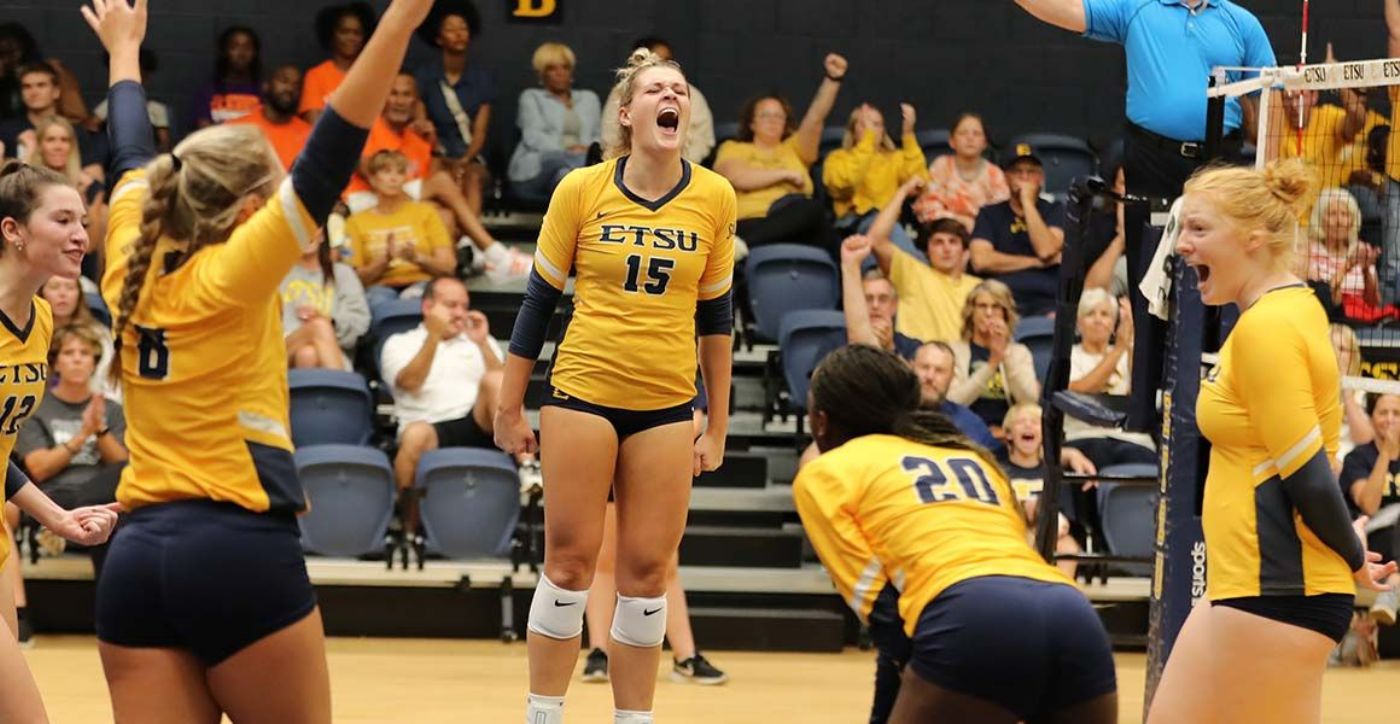 JOHNSON CITY, Tenn. (Oct. 29, 2022) – ETSU volleyball posted a season-high 17 blocks in a battle of Southern Conference leaders on Saturday, turning those efforts into a 3-1 win over Samford inside Brooks Gym in Johnson City.

The Bucs extend their stay at the top of the Southern Conference standings with an 11-1 record, while improving to 17-7 overall. The Bulldogs, who have lost two straight after a seven-match win streak, drop to 8-4 in league play and 13-11 overall.

After matching her career-high with 15 kills in yesterday’s win over Mercer, sophomore Amanda Lowe (Blacksburg, Va.) exceeded that total Saturday with 17 against the Bulldogs. True freshman Whitley Rammel (Ft. Recovery, Ohio) added 13 kills and eight blocks for an impressive night, as she and Lowe combined for 36.5 points.

Sophomore setter Caroline Dykes (Flower Mound, Texas) aided both the attack and defense for another double-double, racking up 37 assists with 11 digs. Dykes has eight double-doubles this season — half of which came in conference play.

The defense did not stop at the net front, as the Bucs tallied 72 digs for their third-highest total this season and the most in a four-set match. Four players hit double digit digs, led by libero Haley Sanders (Brentwood, Tenn.) with 16. For a third straight match, Sanders snuck over a kill. She also went a perfect 14-for-14 on serve receptions.

Graduate Taylor Roberts (Sneads, Fla.) added 12 digs in the effort, while Cantrell and Dykes had 11.

As a team, ETSU was more efficient than Samford with a .235 to .146 attack percentage advantage. Samford also had eight less blocks than the Bucs, but had a 56-54 advantage in kills. ETSU held Samford to a negative percentage in the final frame.

The Bucs have two home matches remaining this season — both of which happen next weekend. First, ETSU welcomes Western Carolina on Friday, Nov. 4 at 7 p.m. The home finale and Senior Day is set for Saturday, Nov. 5 at 4 p.m. against UNCG.