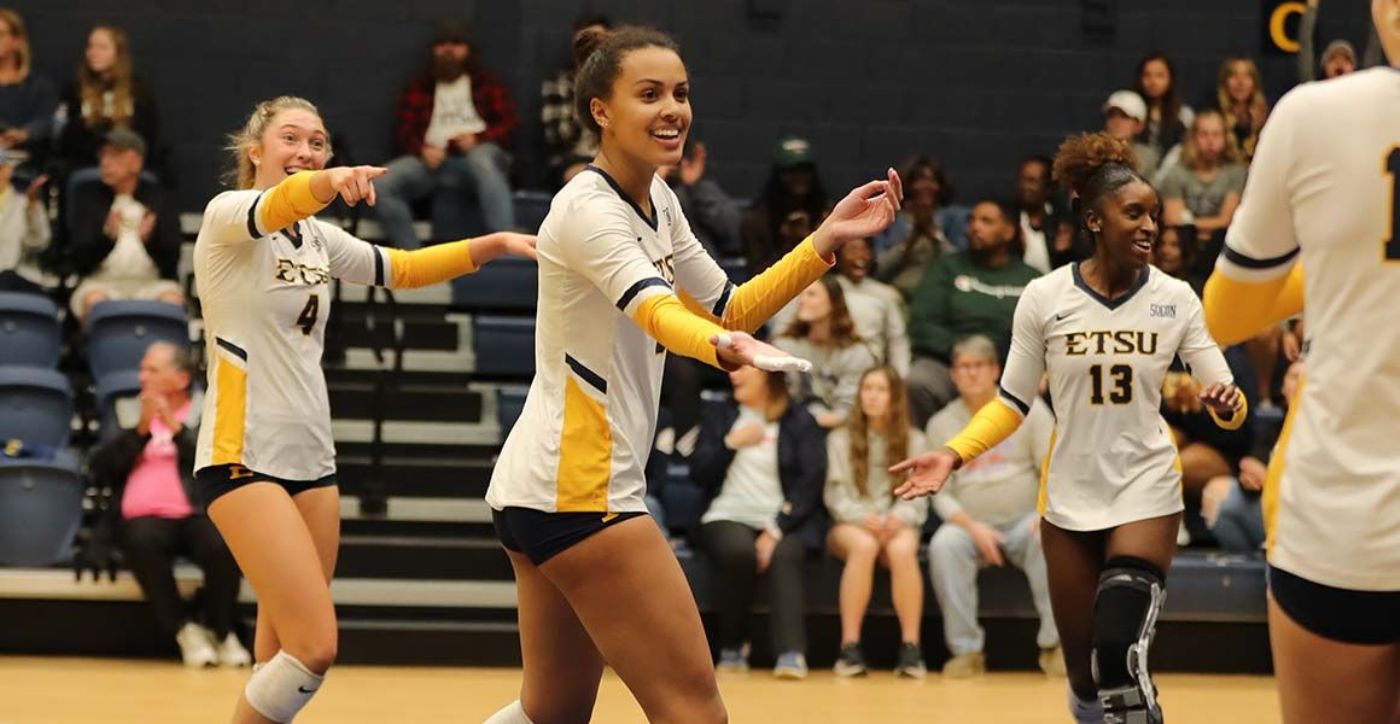 ETSU volleyball clinched the No. 1 seed and at least a share of the regular season conference championship on Friday with a 3-1 win over Western Carolina inside Brooks Gym in front of an electric crowd.

The Bucs have won six in a row and improve to 12-1 in conference matches, taking a three-match lead over both WCU and Samford. ETSU owns the tiebreaker over both schools, meaning neither can overtake the top seed. Western Carolina falls to 9-4 but remain in second place with three matches remaining.

For ETSU, a win tomorrow would secure the outright regular season championship with two matches to go.

The first two sets were tight throughout, as the lead exchanged 11 times and the score was tied on 16 occasions. The Bucs won both sets, despite allowing a 10-0 run in the first frame, to grind out 27-25 and 25-23 set victories.

The Catamounts attempted to mount a comeback in the third frame, holding ETSU below the positive and winning 25-14 to survive. The Bucs did not lie down, keeping WCU’s attack below .100 in the clinching set to finish off the victory.

Western Carolina had most of the statistical advantages, including a 53-48 advantage in kills and a .164 to .149 percentage clip, but ETSU out-hit the Catamounts in all three of the sets it won.

True freshman Kimani Johnson (Southfield, Mich.) and sophomore Abbey Thomas (Goldsboro, N.C.) led the Bucs with double-digit kills, as Johnson landed 11 and Thomas put down 10. Both players were one shy of a career high.

Defensively, the Bucs had 11 blocks and were led by senior Lundyn Coffman (Nolensville, Tenn.) with nine blocks — one solo and eight assisted. She added eight kills and ranked second behind Johnson in points. Johnson was in on five blocks on Friday.

The reigning SoCon Setter of the Month, sophomore Caroline Dykes (Flower Mound, Texas), finished with her ninth double-double of the season with 39 assists and 13 digs. She continues her streak of 20-plus assists matches that’s spanned all 25 matches.

Western Carolina had most of the statistical advantages, including a 53-48 advantage in kills and a .164 to .149 percentage clip, but ETSU out-hit the Catamounts in all three of the sets it won.

The match was No. 100 for ETSU head coach Benavia Jenkins, as she improved her overall coaching record to 61-39 over four seasons.

The Bucs can lock up their first regular season conference championship since 2018 with a win tomorrow, as ETSU hosts UNCG on Saturday at 4 p.m. inside Brooks Gym. Saturday’s match will be senior day, as ETSU will honor Sydney Cherney, Lundyn Coffman, Olivia Cunningham, Lauren Hatch, Samantha Shafer and Taylor Roberts.