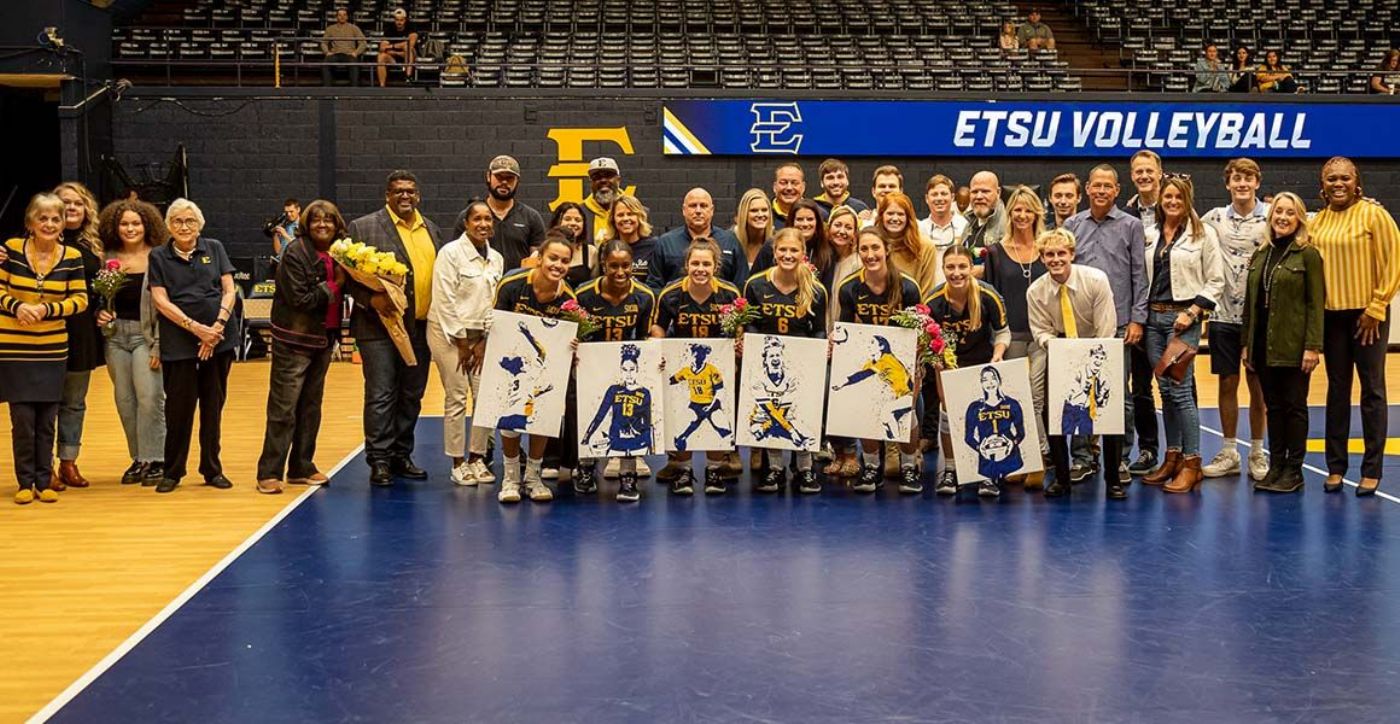 The Bucs played their final home match of the season inside Brooks Gym on Saturday, honoring six senior players and senior volunteer assistant coach Levi Little prior to the team’s 3-1 victory of UNCG. The win guarantees ETSU the outright regular season conference championship and top overall seed in the SoCon tournament, regardless of what happens in the final two matches next week.

ETSU now owns a 19-7 overall record and a 13-1 record in conference play, while finishing with a 10-1 record inside Brooks Gym this season. The Bucs have also won seven matches in a row. Meanwhile, UNCG drops to 10-17 overall and 4-10 in the league.

The route to victory was not ideal, as UNCG stunned the Bucs early and won 25-22 in the first frame. After that, ETSU came alive and outhit the Spartans in the next three sets to pull away, winning set two by a 25-20 final and the swing set 25-15.

The final set brought much anticipation from the crowd, as it took three match points for ETSU to finish things off. Up 26-25 with chants of “Let’s go Bucs” from the home fans, ETSU got the final block from Caroline Dykes (Flower Mound, Texas) and Abbey Thomas (Goldsboro, N.C.) to seal the net, the victory and the regular season title.

Dykes had a stellar match with 51 assists, the most in a four-set match for her all season. She also dug up five, landed two service aces and helped on the final block to win it.

Defensively, libero Haley Sanders (Brentwood, Tenn.) was all over the court with a career-high 26 digs in the win. As a team, the Bucs had a 74-66 advantage in digs.

Four Bucs had double-digit kill totals, led by senior Lundyn Coffman (Nolensville, Tenn.) with 14 kills and just two errors on 28 attacks for a .429 percentage. Coffman also added five digs, one assist and three blocks to cap off her senior day.

Outside of the game-winning point, Thomas was also a factor with seven kills and three blocks, tying Coffman for the team lead. The Bucs out-killed UNCG 59-42 with a .231 to .149 attack advantage.

The set lead changed 12 times over the course of the match, including eight times in the final frame. The set score was also tied on 26 instances on Saturday.

The Bucs still have something to play for despite locking up the regular season championship, as it can match its 2018 conference record of 15-1 with two more wins.