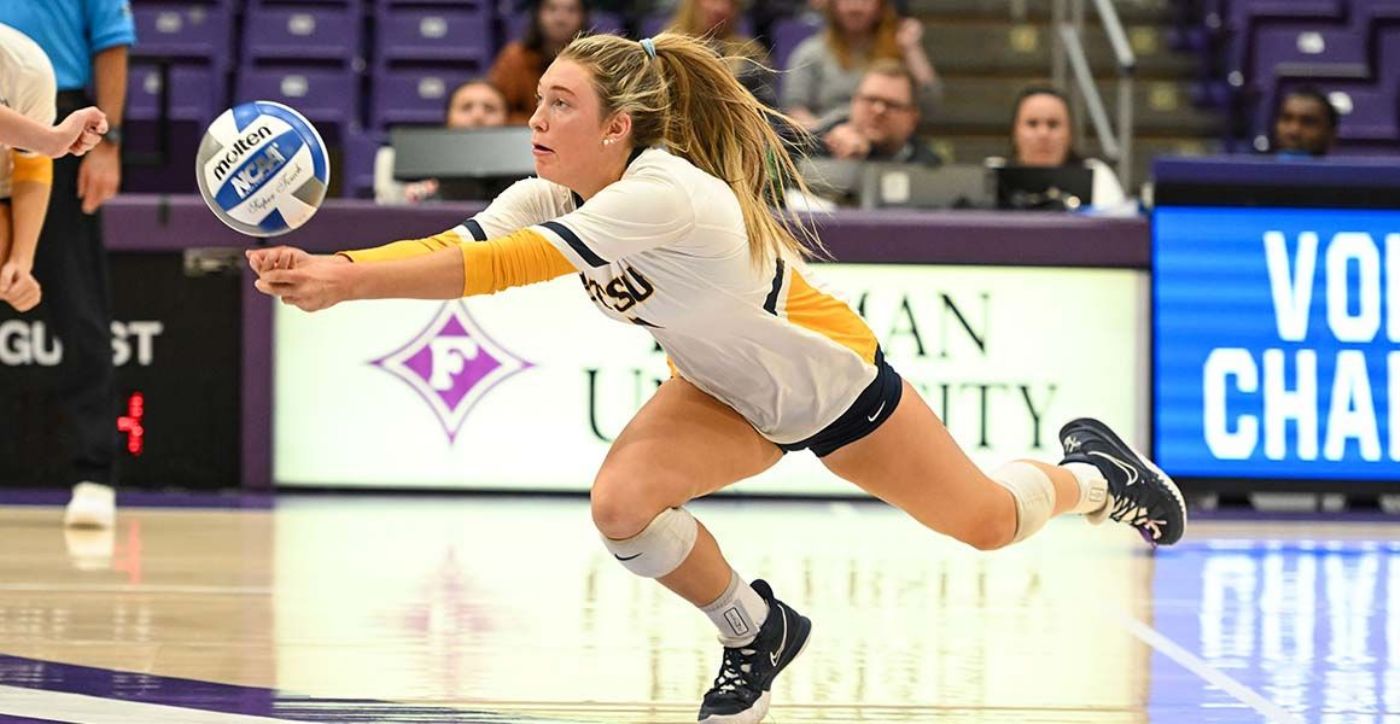 GREENVILLE, S.C. (Nov. 18, 2022) – It was not the tournament result ETSU volleyball hoped for on Friday, as a four-set quarterfinal battle resulted in a 3-1 upset of the top-seeded Bucs by the No. 8 Furman Paladins inside Furman’s Timmons Arena.

ETSU ends this stage of the season with a 21-8 overall record, while finishing Southern Conference play with a 15-1 record and a regular season championship. Today’s setback also ended a nine-match win streak for the Bucs.

On the other side of the net, Furman entered playing its best volleyball of the season, winning three straight prior to Friday’s match. The Paladins also rode the momentum of a first-round win over No. 9 UNCG this past Monday and the advantage of playing on campus in front of their home crowd.

The Bucs have not been defeated in four sets since the second preseason tournament on Sept. 2, winning 21 of their next 24 matches after an 0-5 start.

Friday’s battle included 38 situations where the score was tied and 12 lead changes. Additionally, the first three sets were decided by a combined eight points.

The first set saw five lead changes and 13 ties, including an impact kill by freshman Kimani Johnson (Southfield, Mich.) to make it 21-21 late in the frame. After that, a block by in-state duo Lundyn Coffman (Nolensville, Tenn.) and Jenna Forster (Maryville, Tenn.) put the Bucs ahead and ETSU rode that momentum to a 25-22 first frame win.

The next two sets were also close, but the host school eeked out a 25-23 win in the second set and won a dramatic 25-22 fourth set that saw 16 ties and five lead swaps. The fourth set was where Furman hit its stride, riding the momentum of a .520 hitting percentage.

Forster went on to finish with 14 kills and a .387 hitting percentage, while Amanda Lowe (Blacksburg, Va.) landed 11 kills. The SoCon Freshman of the Year Brianna Cantrell (Appleton, Wis.) had a 13 dig, 10 kill double-double while successfully receiving 44 serves in a busy match.

The NCAA Tournament selection show is announced on Sunday, Nov. 27, while the women’s National Invitational Volleyball Championship (NIVC) announces its bracket after the unveiling of the NCAA Tournament bracket.