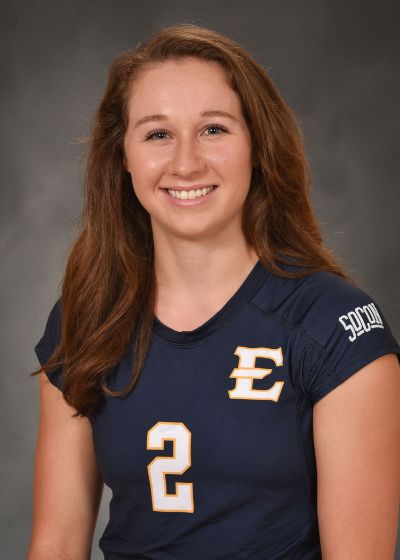 2015 Season (Junior)
Played in and started 30 matches as a junior...Named to the SoCon All-Tournament Team...Also received All-Tournament honors at the Comfort Inn-Vitational in September...Posted five double-doubles and had 40 or more assists on 14 seperate occasions...Tallied a season-high 54 assists at Clemson (Sept. 11)...Led team with 1,088 assists and averaged 10.44 assists per set...Finished second on the squad with 28 aces and third on the team with 65 total blocks.

2014 Season (Sophomore)
Named to SoCon All-Academic Team … Played in 31 of the 33 matches, making 22 starts … Led the team in assists (799) and assists per set (6.66), while also ranking second on the squad in service aces (33) … Ranked sixth in the SoCon in assists per set … Totaled two double-doubles – both coming against Western Carolina … Finished with 54 assists and 12 digs (Oct. 11, at Western Carolina) and 37 assists and 15 (Nov. 4, vs. Western Carolina) … Recorded a career-high 57 assists on Sept. 5 versus William and Mary … Totaled a career-high five service aces on Nov. 4 against Western Carolina … Recorded double-digit assists in 30 of the 31 matches.

2013 Season (Freshman)
Played in 24 of the 31 matches during her rookie season … made collegiate debut against UNC Greensboro on Aug. 30 … recorded a season-high 26 assists in the win vs. Northern Kentucky on Nov. 9 … also posted five digs against the Norse … totaled 12 assists and three digs in the five-set comeback win at Marshall on Sept. 10 … had 10 assists in one set played vs. Mercer on Oct. 22.

About Favre
Played for coach Nick Gonzalez at John Paul II High School in Plano ... Was a four-year letterwinner for the Cardinals, and averaged 7.73 assists per set (711 total) as a senior ... The Plano, Texas native was named team captain as a junior and senior, while being tabbed Most Valuable Player in 2012 … Two-time All-District selection and was named Offensive Player of the Year as a junior ... Favre spent her time playing club volleyball for the Dallas Summit under head coach Mike Minnis.