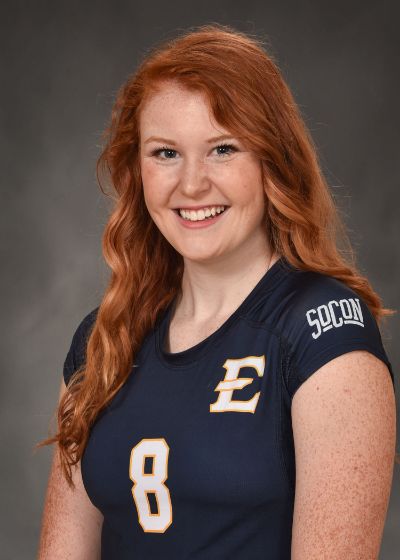 2015 Season (Junior)
Made an appearance in 16 matches and 51 sets during her junior campaign...Totaled 72 digs, 15 aces and eight assists...Had three double-digit dig performances, including a season-high 12 digs against Chattanooga in the SoCon Tournament...Had four aces against Mercer (Oct. 31), which was the most for an ETSU player on the season.

2014 Season (Sophomore)
Named to SoCon All-Academic Team … Played in 29 matches, making eight starts … Recorded double-digit digs four times, including a career-high 17 at Western Carolina (Oct. 11) … Had a career-best four service aces in the four-set win against MTSU (Oct. 7), while finishing the season with at least one ace in her final five matches.

2013 Season (Freshman)
Played in 29 of the 31 games for the Bucs during her rookie campaign … made her collegiate debut against UNC Greensboro on Aug. 30 … posted a season-high 14 digs versus Northern Kentucky on Nov. 9 … had back-to-back games with three service aces against Liberty (Sept. 6) and VCU (Sept. 7) … registered 11 digs in the win vs. North Florida on Nov. 15.

About Rice
Played high school volleyball at Science Hill … Was the Lady ‘Toppers’ primary setter in 2011 and moved into a hitter’s role in 2012 … Named Big Conference co-Player of the Year in 2011 and 2012 … Totaled 411 kills with a .269 hitting percentage in 2012, along with tallying 330 digs, 98 assists, 73 service aces and 69 blocks en route to leading Science Hill to the Class AAA sectionals.

Personal
Daughter of Ren and Stacy Rice … Her sister, Ivey was a former outside hitter for ETSU while other sister, Sydney, played volleyball at Freed-Hardeman University.