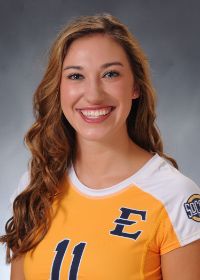 2015 Season (Senior)
Started 27 of 31 matches in her final season as a Buc...Had a career day on the block Nov. 7 at UNCG with seven total blocks...Notched a career-best seven kills in the Comfort Inn-Vitational vs. Akron (Sept. 19)...In total, Schafer had 67 kills and ranked fourth on the team with 51 blocks as a senior.

2013 Season (Sophomore)
Played in 19 matches for the Bucs … finished with three kills (1.000 attack percentage) and a block in a win against North Florida … posted two blocks at Kentucky on Sept. 7 and versus Northern Kentucky on Nov. 9 … tallied 10 total blocks on the year and had at least one block in eight matches for the Blue and Gold.

2012 Season (Freshman)
Received Atlantic Sun All-Academic honors … played in 23 matches … tallied two kills and a career-best five blocks in the sweep at Presbyterian on Aug. 28 … also had two kills and five blocks in the win vs. Charlotte on Sept. 1 at the Clemson Classic … was a perfect 2-of-2 in attacks in the four-set home-opening win over Marshall … also provided the Blue and Gold with five blocks vs. the Thundering Herd.

About Schafer
Four-year letterwinner at Dekalb High School and led the Barbs to regional titles in 2010 and 2011 … named Northern Illinois Big 12 all-conference in 2011 and received Honorable Mention honors in 2009 ... named by the AVCA to the 2011-12 Under Armour Girls High School All-America Watch List …  tallied 76 blocks and 135 kills in 2011.