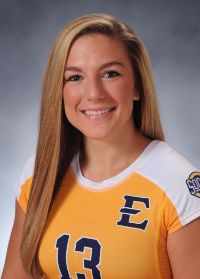 2015 Season (Senior)
One of three Bucs to appear in every set of every match in 2015...Finished third on the team with 22 aces and 233 digs...Had two aces or more in six different matches, including a season-high three vs. Morehead State (Sept. 18)...Reached double figures in digs eight times with her season-high coming Oct. 17 vs. Wofford with 18 digs.

2012 Season (Freshman)
Atlantic Sun All-Academic member … played in all 36 matches as a freshman … totaled 214 digs and 16 service aces for the Bucs … had a career-high 12 digs in the four-set win over Kennesaw State on Nov. 6 – marking one of five matches with double-digit digs … recorded her first collegiate kill in the five-set win at Stetson on Sept. 29 … the kill against the Hatters won the match for the Blue and Gold as ETSU rallied from two sets down to win the fifth set, 15-11.

Prior to ETSU
Four-year letterwinner under coach Johnson at Geneva High School … also played club volleyball at Sports Performance for ten seasons … was named Defensive Player of the Year in 2010 and 2011 … set the school record for most digs in a match, season, and career with the Vikings … named all-conference in the Upstate Eight and selected All-Area Player in October 2011 … voted all-tournament in three club postseason appearances, while also winning one national championship.