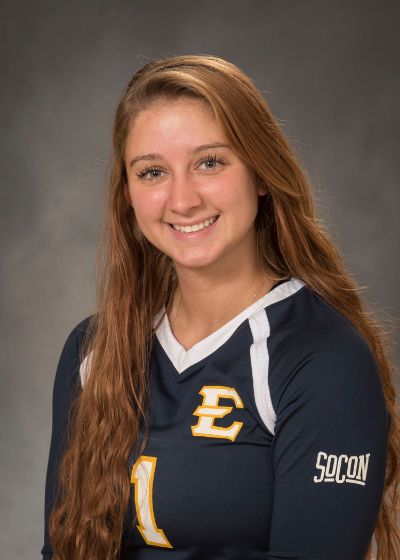 2016 Season (Sophomore)
Recorded a career-high three service aces vs. Troy (8/27) ... named to the Liberty Invitational All-Tournament Team ... registered a season-high seven assists and 25 digs at UNCG (10/29) ... from October 7 to Oct.29 recorded nine straight double-digit digs ... had back-to-back 20 dig or more games two times during the season ... earned 20 or more digs seven times during 2016 ... averaged 4.29 digs per set, which ranks as the fourth best in an single-season in ETSU history

2015 Season (Freshman)
The Oswego, Ill. native was named to the All-SoCon freshman team following the season...Aguilar, who served as ETSU’s libero during her entire freshman season, was one of three players to appear in every set this season...Aguilar led the Bucs and all SoCon freshmen with 413 digs (4.01 per set)...She had 20 digs or more in a match five times in 2015, including a career-high 29-dig performance at Wofford (Nov. 4)... Aguilar was named to the Clemson Classic All-Tournament team in September and was the SoCon Defensive Player of the Week (Nov. 9).

About Aguilar
Two-year letter winner at Oswego East High School in Oswego, Ill. … Played varsity as a sophomore and was a two-time all-conference and all-area selection … Helped guide the Wolves to a pair of regional championship finals and was named to the Antioch All-Tournament Team in 2013 … Played club volleyball for Mizuno Sports Performance – where her team tied for fifth at the 2013 and 2014 AAU National Championship and placed second at the 2013 Wisconsin Dells Championship … Named to the Wisconsin Dells Championship All-Tournament Team.  Hailey played with the USA Volleyball High Performance A1 Red team in 2014, winning the gold medal in the tournament