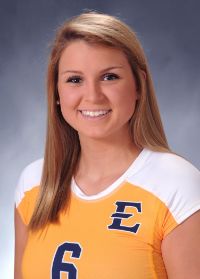 2015 Season (Freshman)
Redmond appeared in 17 matches and 33 sets as a freshman in 2015...Totaled 13 kills, 17 digs and six service aces in her first season in the Blue and Gold...Her best match came Oct. 24 vs. Western Carolina in which she notched seven kills to go along with nine digs...Posted an ace in five of six matches from Oct. 23 vs. The Citadel to Nov. 13 vs. Chattanooga.

About Redmond
Carries a winning pedigree to Johnson City as she led Liberty Hill High School to three straight district championships, including a perfect 10-0 district record in 2014 ... The Panthers won 60 of their 65 sets played over the last three seasons, while totaling 113 victories in Redmond's four-year playing career ... Named Most Valuable Player for the Panthers as a senior, while landing all-district and academic all-district accolades all four years ... Two-time District 8-4A MVP and was tabbed AAU Girls’ Junior National Champions All-American.

Personal
Born Sept. 14, 1996 ... Daughter of Todd and Jana Redmond ... Her mother played volleyball at Concordia Lutheran College, while Redmond’s father was a basketball player at Ranger Junior College and Concordia Lutheran College … Her sister played basketball at Southern Arkansas University before transferring to Concordia University to play volleyball ... Has yet to declare a major.