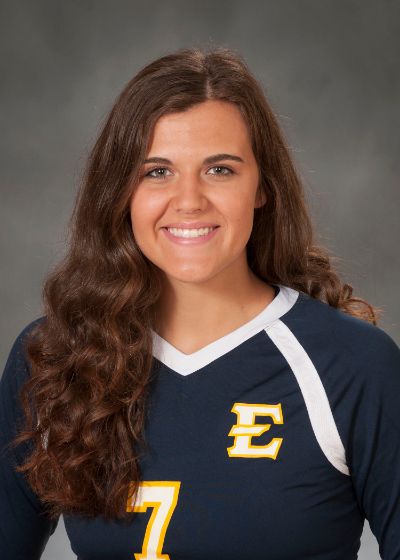 Played in 84 sets...recorded a career-high six blocks vs. Western Kentucky (9/8)…registered 69 total blocks on the season…finished with 11 solo blocks (second highest on the team)…had five kills and five blocks against Virginia (9/1)…registered a block or more in all but five matches...named to the SoCon All-Academic Team.

2016 Season (Sophomore)
Registered a career-high 11 kills vs. North Dakota (9/9) ... registered four digs along with eight kills and two blocks at Western Carolina (10/15) ... in the SoCon Tournament Quarterfinals had nine kills, a career-high two assists and five blocks (11/19) ... during the season had 15 matches of at least four kills and eight matches of at least three blocks.

2015 Season (Freshman)
Appeared in 30 matches and made 25 starts as a freshman...McPartland finished fourth on the team with 143 kills and was second with 77 total blocks...Had nine matches in which she had four or more blocks including a six-block performance vs. LIU Brooklyn (Aug. 29)...Posted a career-high nine kills in an Oct. 17 match vs. Wofford...Had nine matches as a freshman when she hit .300 or better in a match with her best performance coming Nov. 14 vs. Samford where she hit .571.

About McPartland
Multi-sport athlete at Boone High – volleyball, basketball and track and field ... Three-time all-conference performer in volleyball, while also receiving all-conference honors in basketball and track and field ... Named first team all-state by the Des Moines Register in 2014 and was selected to play in the Iowa Girls’ Coaches Association All-Star Game ... Received first team all-district honors in volleyball and basketball, while being a state qualifier in track and field (discus)...Career leader at Boone High School in rebounds and blocks as well as second in points...Was also successful in the classroom as she earned an academic letter recipient, became a member of the Scholastic Honor Society and earned the Distinguished Academic Award as a senior.

Personal
Born Dec. 4, 1996 ... Daughter of Jim and Heidi McPartland ... Brother (Mitchell) played volleyball at Grand View University ... Plans to major in elementary education....Chose ETSU because she loves the campus, her team, and the mountains.