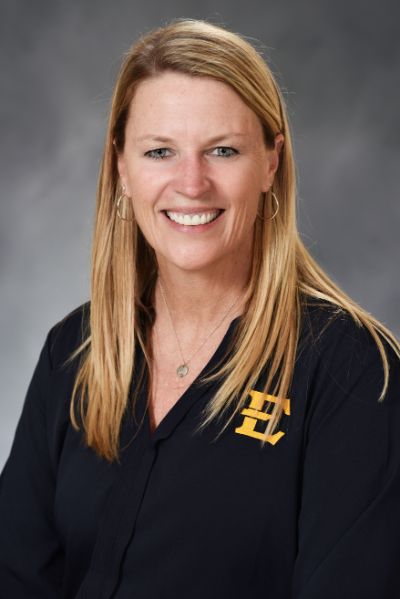 Lindsey Devine will begin her 16th season as the head coach of the ETSU volleyball program this fall. During her tenure, Devine has compiled the most victories by a coach in program history and directed the Buccaneers to their second NCAA Tournament appearance in 2017. Devine notched her 250th career win Sept. 19 against Western Carolina.

In 2017, Devine led the Bucs to their second NCAA Tournament appearance after sweeping all three opponents in the Southern Conference Tournament to capture the title. ETSU finished with a 19-12 overall record, while finishing 12-4 in conference action. Rylee Milhorn and Leah Clayton received All-SoCon First team honors, while Marija Popovic also earned a spot on the league’s All-Freshman Team.

During the 2016 season, Devine was named Southern Conference Coach of the Year after guiding the Bucs to 21-7 regular season record and the program's first SoCon Regular Season title since 1991. Devine led the Bucs to the No.1 seed in the SoCon Tournament and ended up with an overall record of 22-8 and 13-3 in conference play. Devine in her 15 seasons at the helm has led ETSU to five 20-win seasons. Devine also guided the Bucs to the program's first ever undefeated record at home (11-0) in 2016.

The 2012 season was a historic year for the Blue and Gold. The Bucs captured their first-ever Atlantic Sun Championship after going into Lipscomb’s Allen Arena and defeating Mercer, Lipscomb, and North Florida en route to punching their ticket to the 2012 NCAA Tournament for the first time in program history. Along with winning the conference tournament, the Blue and Gold placed three players on the A-Sun All-Conference Team, while also having a record-high four scholar-athletes selected to the All-Academic Team. Megan Devine was named A-Sun Player of the Year, First Team All-Atlantic Sun, and Tournament MVP, while Meredith Hardy landed First Team All A-Sun honors and Khadijah Wiley took home All-Freshman Team accolades. Hardy, Devine, and Bethany Gesell were also named to the A-Sun All-Tournament Team. Meanwhile, Jamie Rutledge and Ivey Rice joined Devine and Hardy on the All-Academic Team. After guiding the Bucs to the A-Sun Championship, Devine has now led the Blue and Gold to seven postseason appearances in eight seasons with the A-Sun, while guiding ETSU to the conference semifinals for a sixth consecutive time.

ETSU represented the A-Sun in the NCAA Tournament by taking on No. 16 national seed Kentucky in the First Round in Lexington. Despite the setback, the Bucs enjoyed an outstanding season by capturing over 20 wins (23 total) for the second time in the last three years, while also setting program records for block assists (613) and sets played (139), as well as new A-Sun records for total blocks (366.5) and blocks (198.5) in conference only matches.

In its first season in the Southern Conference since 2004, ETSU finished 2014 with a 17-16 overall record to go along with a 11-5 mark in conference action. Katie Muey was named Libero of the Year in the SoCon, senior Meridith Hardy joined Muey on the first team, while Rylee Milhorn notched a spot on the league's all-freshman squad.

In 2013, the Blue and Gold won a share of the Atlantic Sun regular season championship after setting a program-record with 16 conference wins. The Bucs also posted their second straight 20-win season after totaling 22 victories, while three Buccaneers received all-conference honors – Megan Devine and Meredith Hardy (First Team All A-Sun) and Katie Muey (Second Team All A-Sun). ETSU posted a pair of nine-win match streaks, including a win at Tennessee, marking the first win over the Vols in nearly 35 years.

In addition to her success with the Bucs, Coach Devine has been successful on a national level as she began her coaching duties for USA Volleyball in the summer of 2012. Devine, who coached alongside legendary former Ohio State head coach Jim Stone, took the U.S. Girls’ Youth National Team to Pula, Croatia to compete in the 2012 European Challenge. Throughout the process, Devine made trips to Colorado Springs, Colo., to help assist with the tryouts at the Olympic Training Center, and the team also stopped in Italy for some tune-up matches prior to competing in the European Challenge.

In the summer of 2013, Devine rejoined Coach Stone for a second straight year, as the Buccaneer leader was appointed an assistant coach for the U.S. Girls’ Youth National Team. Again, Devine spent time in Colorado Springs, Colo. and Anaheim, Calif., helping select the team before taking part in the World Championships in Thailand. While in Thailand, the U.S. made history by winning the silver medal, marking the first time the team had ever medaled at the championships.

In 2014, Devine helped coach the U.S. Women’s National Team to a gold medal at the NORCECA World Championship Qualification Tournament last weekend at the U.S. Olympic Training Center in Colorado Springs. In addition, Devine added to her medal count coached the U.S. Girls’ Youth National Team to a silver medal at the NORCECA Women’s U-18 Continental Championship, which was held in San Jose, Costa Rica this past July.

In 2011, the Blue and Gold continued their stretch of postseason play by reaching the A-Sun semifinals for a fifth straight time. The Bucs earned a thrilling five-set win over fourth-seeded Kennesaw State in the quarterfinals and Megan Devine was named to the all-tournament team. In addition to earning all-tournament team accolades, Devine was also one of three Buccaneer players to receive postseason honors as she was named First Team All-Atlantic Sun. Joining Devine with conference awards were Jamie Stancliff (Second Team) and Meredith Hardy (All-Freshman Team). Not only did the squad enjoy a solid season on the court, but the Bucs were also one of 103 Division I teams to receive the AVCA Team Academic award after generating GPA of 3.338, while six players earned a GPA of over 3.8.

The 2010 Buccaneer squad enjoyed one of their best seasons in program history, as ETSU finished with a 26-9 record and advanced to its first Atlantic Sun Championship final. The 26 wins in 2010 were the most wins for the program since the 1978 season. In addition to the team accomplishments, several individuals were recognized following the 2010 season. Megan Devine was named Atlantic Sun Freshman of the Year and was named to the All-Freshman Team, while Alysa Long (First-Team) and Whitney Cogburn (Second-Team) were named to the All-Conference Team. Long led the team and the conference in blocks and hitting percentage, while also earning a tryout for the U.S. National Team. The Bucs led the A-Sun and ranked 23rd nationally in blocks per set. During the summer of 2011, Devine served as the Continental Coach for the USA High Performance Championships in Tucson, Ariz.

The 2009 squad was one of just 94 schools in the country to earn the American Volleyball Coaches Association (AVCA) Team Academic Award. Additionally, the Bucs earned more recognition by the AVCA as the 2010 recruiting class was named “Honorable Mention.” During the 2009 season, Devine earned her 100th career coaching victory in a win over North Florida on Nov. 6.

Devine led the Bucs to a fourth straight Atlantic Sun Tournament appearance in 2008, along with winning their first Atlantic Sun Conference Tournament match against Mercer. Devine saw freshman McKayla Barber excel in 2008 as she was named to the A-Sun All-Freshmen and Tournament teams.

Devine saw her first player reach the professional ranks in 2007 as former standout Crystal Palmer spent the year playing with AOK Osijek, Akademski (Academic) Odbojkaski (Women's Volleyball) Klub (Club) of Osijek in Croatia.  Also in 2007, another of Devine's players, Kaena Apana, was named one of the top five liberos in the country by Collegiate Volleyball Update. Apana was seventh in the nation in digs, and broke four A-Sun records and three ETSU records. I

In 2006, the ETSU squad finished 25-7 overall, the most wins since 1991. This successful team set a new school record with a 17-match win streak en route to compiling a perfect 9-0 record in conference, while capturing the first A-Sun regular season title in school history. Seniors, Nani Emerson and Jennifer Sartor and juniors Kaena Apana and Callie Kiselich all earned All-Conference honors, while Desiree Dyck was placed on the All-Freshman Team.

Devine is USA Volleyball CAP 1 and Increased Mastery and Professional Application of Coaching Theory (IMPACT) certified, and has served as a court coach with the USA Volleyball High Performance for the last several years. Devine is also the head coach for Kingsport Volleyball Club 17. Since the founding of the club, Devine has raised the level of club volleyball in the state of Tennessee. Her club team has experienced many tournament victories. In 2008, the KVC team won the 17 club Southern Region Championship. Devine’s 2009 club team qualified for the Junior Olympics National Tournament that was held in Miami, Fla.

Devine is a graduate of York University in Toronto, where she earned bachelor of arts degrees in English and physical education in 1988, and a bachelor of science degree in education in 1990. Devine then received her Master’s in Sports Management from ETSU 2014 and her Global Sport Leadership Doctoral degree in 2018. Devine played outside hitter for York from 1984-1988, helping her team to four all-province titles, along with a bronze medal at the 1985 Canadian National Championships.

Devine began her coaching career with Durham Attack Volleyball Club, one of the top amateur programs in Ontario. She served as the assistant coach from 1997-99 for Durham Attack’s 17 Boys Elite Team, and helped coach back-to-back National Championships. She was named Coach of the Year following the 1999-2000 season.

Devine resides in Kingsport, Tenn., with her husband Carl and two children Megan and Owen.