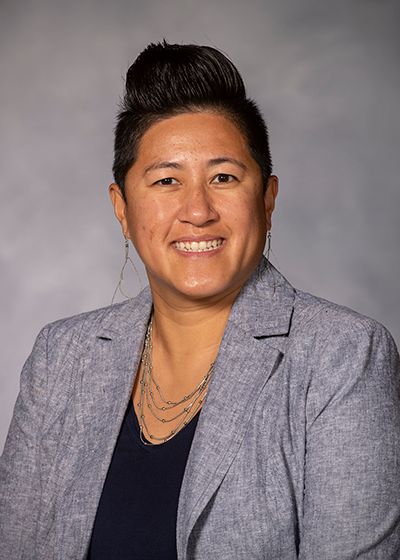 An experienced and seasoned professional at many levels of collegiate coaching, Del Rosario has appeared in four NCAA Division I national tournaments plus the WNIT, NAIA and Division II tournaments. In addition to team accomplishments, Del Rosario has also assisted in tremendous individual development for her athletes, highlighted by the five league players of the year her pupils have claimed across the seven different conferences she has coached in.

Most recently, Del Rosario spent a year at Virginia Union University of the Central Intercollegiate Athletic Association. During that memorable season, the Panthers dominated the CIAA, winning the north division regular season championship and conference postseason title before moving on to the NCAA Division II national tournament. For her efforts, Del Rosario was named the WBCA Division II National Assistant Coach of the Year as well as a NEXT UP up-and-coming assistant coach. Del Rosario aided in the development of Shareka McNeill, the CIAA Player of the Year, as well as CIAA All-Rookie Team honoree Ifunanya Okoye.

Prior to her lone season at Division II VUU, Del Rosario had a plethora of Division I stops, including three seasons at Niagara University of the Metro Atlantic Athletic Conference as an assistant coach and the program’s recruiting coordinator. In her last season at Niagara, Del Rosario helped the Purple Eagles win their most conference games since the 2004-05 season. In that same year, Del Rosario guided Victoria Rampado to MAAC Player of the Year honors.

Preceding her three seasons at Niagara, Del Rosario spent the same period of time at Winthrop University of the Big South Conference. In her time with the Eagles, the program would reach unprecedented heights, winning the Big South postseason championship in 2014 for the first time to move on to their inaugural NCAA tournament. Additionally, Winthrop would make their first-ever WNIT appearance a year earlier, winning the team’s first postseason game in program history by defeating Florida Gulf Coast 65-51. Del Rosario would mentor two of the greatest players in Winthrop lore while in Rock Hill, S.C., assisting Dequesha McClanahan to three straight Big South Player of the Year awards while Schaquilla Nuun, later a WNBA draft pick, would win the Big South Freshman of the Year award in 2013.

While Del Rosario would spend just a single season at Eastern Michigan and Morgan State before moving on to Winthrop, those seasons were ones that are still remembered on their respective campuses. During the 2011-12 campaign with EMU, the team would win the MAC West Division regular season championship, MAC postseason championship and move on to the NCAA tournament, still one of just two trips to The Big Dance in the program’s 43-year history. The year before at Morgan State, Del Rosario’s steady hand would push the Bears to their first Division I postseason tournament courtesy of a second-place finish in the Mid-Eastern Athletic Conference.

Del Rosario’s first Division I job came in her hometown of Cleveland, spending four years with the Cleveland State Vikings in director of basketball operations and assistant coach roles. From 2006-2010, the time Del Rosario spent at CSU, the Vikings made the NCAA tournament twice, the only two times they have done so in their time at collegiate basketball’s highest ranks. Del Rosario assisted in Kailey Klein’s maturation while on staff, the 2010 graduate winning Horizon League Player of the Year honors under the tutelage of the Cleveland-native.

Del Rosario’s first coaching job came at the same place she played her collegiate basketball - Notre Dame College (OH) of the NAIA. On staff from 2002-06, the work Del Rosario put into the program paid off in her final year with the Falcons, the program making NAIA nationals for the first time. The 2005-06 team that went to the national tournament would go on to be inducted into the Notre Dame College Hall Of Fame in 2014 for their historic accomplishment.

Del Rosario was a two-year letterwinner at Notre Dame College, graduating with a bachelor’s degree in psychology, later earning a master’s degree in education with a specialization in sports management from Cleveland State in 2005. She is a 15-year member of the Women’s Basketball Coaches Association and nine-year member of the Asian Coaches Association.